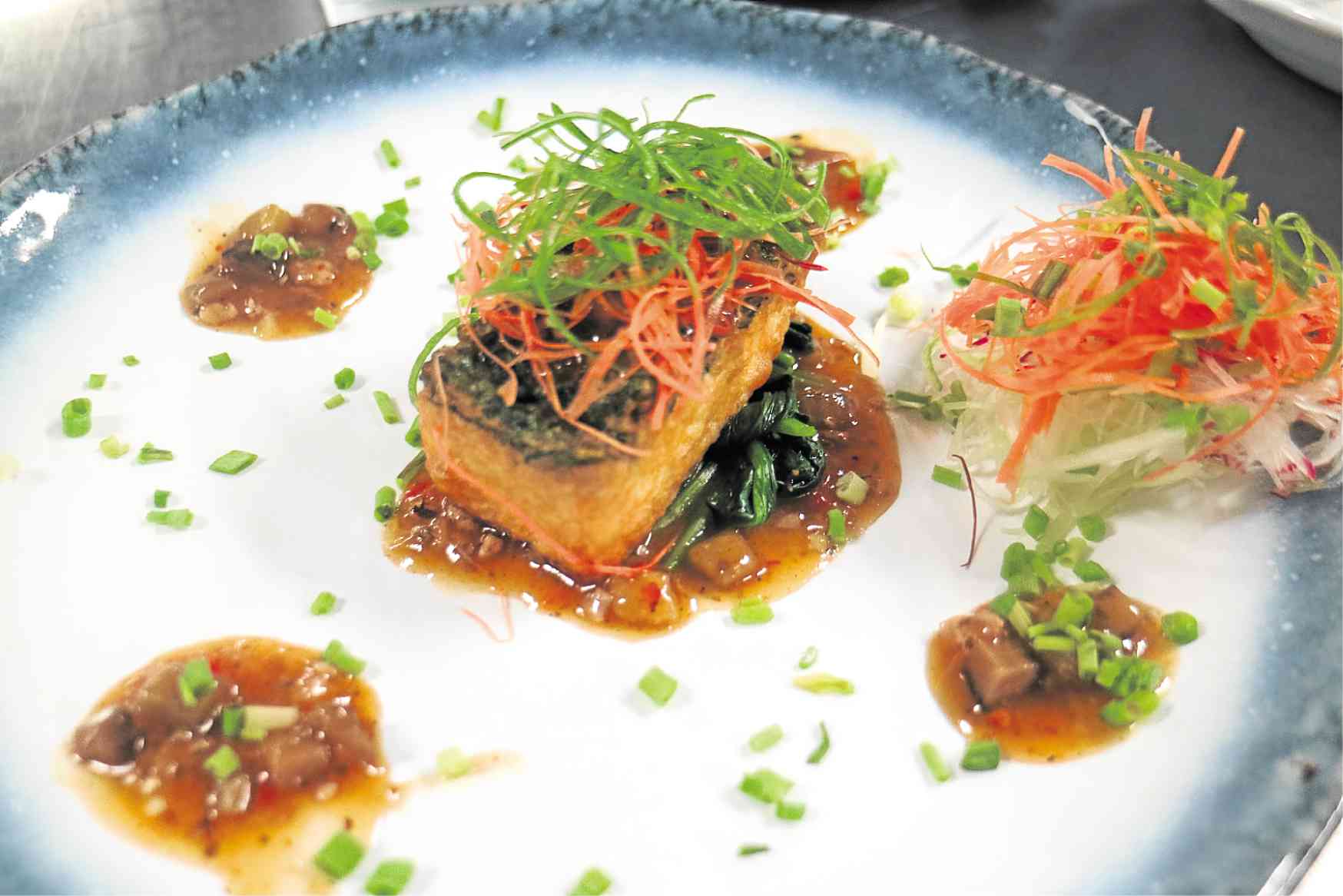 I never thought I could make tofu from scratch—one topped with spinach at that. And all I had to do was mix soya milk with egg and whisk the mixture until frothy. After 25 minutes of steaming and two hours of chilling, what was liquid became solid—a silky, milky tofu topped with chopped spinach.

I guess that’s the kind of wonder one can expect in a master class conducted by Jereme Leung, the chef behind China Blue, Conrad Manila’s Chinese restaurant. Famous worldwide for his modern Chinese cuisine, chef Leung patiently guided a group of food writers through the steps of making tofu, one of China Blue’s specialties.

Part of the dish was a sauce made with diced chicken and about 12 other ingredients. Thanks to the kitchen staff who had prepared the mise en place ahead of time, and an industrial stove that quickly cooks ingredients over very high heat, the sauce was ready in no time.

And all the while, chef Leung generously shared cooking tips with a mesmerized audience. He warned against throwing stuff into a wok that has simmering hot oil, for instance. This will make the oil splatter on your hand, or maybe even on your face.

As pleased as we were at having prepared our own tofu dish, we were even more enamored by the lunch that chef Leung and Conrad’s executive Chinese chef Eng Yew Khor had prepared.

First there was potato bun, which was pretending to be a potato, but was really a dumpling with a filling of steamed chicken imbued with a light touch of curry.

There was also what seemed like a tomato, but was actually a crisp dumpling with moringa leaves and a sweet meat filling.

As for the soup, it was served in a large coconut shell adorned with leaves, making it look like a crown. The slowly simmered consommé of peach gum was an elixir, every spoonful whispering of comfort and flavor. Outstanding was the abalone, so earthy and fleshy it seemed like it came from a garden of earthly delights.

And still all these were but a prelude to the main course of miso snow fish with garlic white sauce, and diced chicken baked with Chinese sweet vinegar atop garlic rice served in a bamboo cup.

Dessert was a blend of sweetness and fragrance. Chef Leung had hand-carried with him roses from the south of China which had been grown specifically for eating. The petals were crushed, then made into ice cream, their red color intensifying into magenta. Every spoonful was like eating a field of flowers.

Just before we parted, each of us was given an award—based on our skills during the master class. There was recognition for the most creative, for instance, and others for best presentation and “wow” factor. Mine was “best in culinary skills.” Which was very kind of chef Leung and Conrad Manila to do. And which was what inspired me to recreate the tofu dish we learned from chef Leung.

Clean the spinach leaves well. Take a few leaves at a time and roll them together. Slice the leaves thinly, then chop them finely.

Crack the eggs into a bowl. Pour in the soya milk. Stir the mixture until foamy. Brush the bottom of a plastic or glass container (about 6” x 4” in size) with oil. Line the bottom with cling wrap that’s heat-resistant.

Strain the soya milk mixture into the container. Sprinkle the spinach on top. Put in a steamer and steam for about 25 minutes.

Remove from the steamer and chill in the refrigerator for two hours.

Cut the prepared tofu into large squares (or rectangles). Wipe dry with paper towels to remove the moisture. Heat the oil in a wok until it’s smoking hot. Fry the tofu squares in the hot oil until brown. Remove the tofu from the wok. Set aside.

Wipe dry the chicken and the vegetables with paper towels. In another pan, heat more oil then sauté the chicken until brown. Add the shallots and garlic and continue sautéing. Add the eggplants, mushrooms and bell peppers and stir-fry.

Pour in chicken stock or water. Season with spicy bean paste and oyster sauce. Add pinch of salt and sugar and stir-cook until the vegetables are tender.

Dissolve the cornstarch in the one-fourth cup water. Pour into the wok to thicken the sauce. Remove the wok from the heat and sprinkle sesame oil on top of the mixture to make it shiny.

For each plate: Arrange some spinach on the center of a plate. Spoon some sauce over the spinach and add one tofu square. Spoon sauce around the tofu and along the sides of the plate. If desired, garnish with spring onions, carrots and scallions.