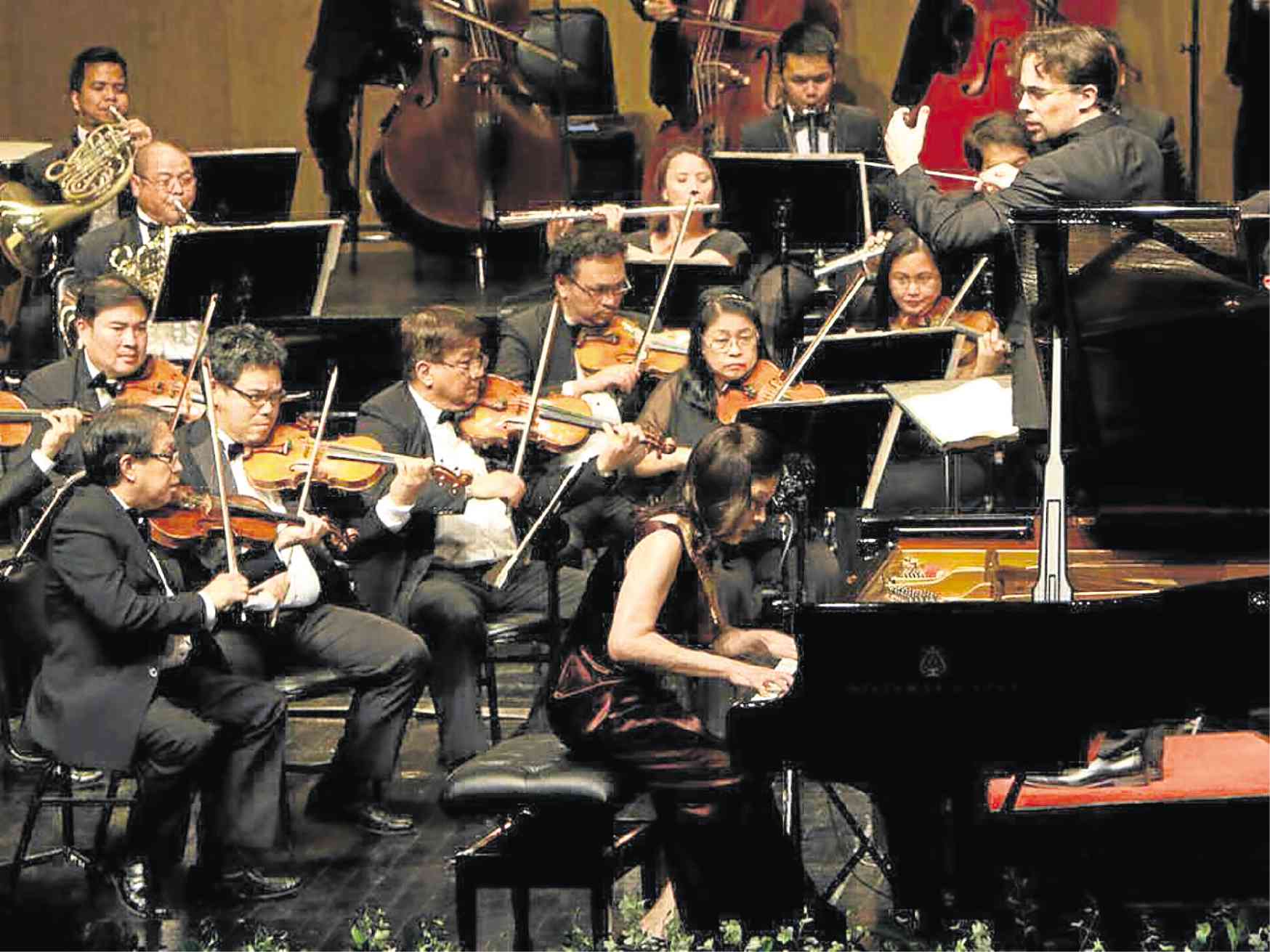 Licad performing with the PPO under Olivier Ochanine

Last Tuesday, three days before her Chopin No. 1 and 2 concert (Oct. 27) at the Cultural Center of the Philippines, Cecile Licad faced a table of editors and writers.

She noticed it was a well-prepared lunch and asked one how to pronounce the names of the appetizers (Burrata and Vichyssoise) and wondered if Smoked Duck Carpaccio was Italian- or Spanish-inspired.

Then replying to a few questions, one of the world’s foremost concert pianists rued, “I was involved with music at age four. That means 50 years of learning and playing the piano.”

She recalled how, in the ’80s, two concerned music critics attempted to teach her how to walk properly by putting a book atop her head to force her to develop good posture.

In those same growing-up years, she remembered, a Blue Lady—as the coterie of then First Lady Imelda Marcos was called—suggesting that she get a facelift because she didn’t know how to smile properly. “I told her, if I go through that, I’d be smiling forever even in a wake.”

She doesn’t dislike company but she believes, however, that an artist needs more time to be alone. “I understand it that people are truly proud of you and want you around most of the time. But an artist needs to withdraw from that crowd, to be cloistered like a nun and to be able to reflect on her calling. It is not an easy profession. You have to live life, but you also make sure your art is enriched by it. It takes some good imagination to learn music and to make it connect to life. I like to experiment with sounds so that the music composed hundreds of years back will sound like it’s part of what we hear every day.

“You have to make them sound fresh and not something that belongs to the museum.”

She noted that playing Chopin involves a lot of hard work and she is glad that her concert presenter, Nedy Tantoco, Rustan’s chair and head of the Philippine-Italian Association, had thought of doing two Chopin concertos in one evening—something not usually done. She said she was honored to be part of Rustan’s 65th anniversary celebration this year.

She expounded on her music:

“Chopin’s melody may sound easy, but it cannot be played like Mozart or Tchaikovsky. It is a very delicate piece of music that depends a lot on nuances and subtlety. It cannot be played literally as the music scores indicate. Just because it is delicate doesn’t mean you settle for a tubercular version. From the music scores, I like to explore a sound from what I imagined could be Chopin’s time. You must relate to the composer and his time, and this involves hard work. There is no easy way out of these two concertos. That is why I have to practice at once after a 20-hour flight from New York and re-explore the music.”

She recalled how years ago, she was told by recording engineers that the tempo of her Chopin No. 2 with London Symphony under Andre Previn was three minutes slower or faster than another version of a famous soloist.

“At age 21, I could not always reason out why it has to be so. What I am sure of is that it is my version and not anybody’s. I don’t like copying style and approach from another musician. I go straight to the core of the music and do my own interpretation.”

She was vindicated when that Chopin recording with Previn won the Grand Prix du Disque distinguished citation from Warsaw’s Chopin Society. She was the first recipient of this citation from Poland’s Chopin specialists.

In her first recital in Poland many years back, Licad used a Paderewski (noted Polish pianist and statesman) piano, after which the critics hailed her as one of the “best Chopin interpreters in 15 years.”

Licad told the media Chopin was her first favorite composer and it was providential she loved his Concerto No. 2 as early as age 11.

“That concerto won for me the Manila Young Artists Auditions when I was barely in my teens. I nearly didn’t make it in that competition because one member of the jury thought that the Chopin concerto was not suited for an 11-year-old pianist. But years later, it was my debut concerto with the New York Philharmonic under Zubin Mehta.”

Many years later, Licad found herself in the company of another revered Chopin interpreter, Martha Argerich, who had lunch in her New York apartment and raved over the Bicol laing cooked by this Bicolano pianist.

In private, Argerich said she considers the Filipino Chopin interpreter as the greatest pianist of her generation.

More answers to some questions during our media lunch:

No, her hands are not insured and she treats them just like any other part of her body. Yes, she washes them even after a long practice. But at times when she falls, she instinctively protects her hands upon landing on the surface.

She likes to believe she can perform until age 100. “One of my teachers, Mieczyslaw Horszowski, died at age 100 and still gave piano lessons a week before he died. His mother was a pupil of Karol Mikuli, who was a pupil of Frederic Chopin. I believe that if you constantly nurture your art, you can still play beyond the ripe old age. My other teachers—Rudolf Serkin and Seymour Lipkin—were like that.”

No, she doesn’t believe artists should conform to the public’s perception of them. “I was in the jury of a music competition and I thought some contestants all sounded the same just living up to some expectations. There was one Chinese transgender who joined the competition and I thought she was a knockout. She had an individual approach to her music, which to the jury was very unconventional. She dressed differently, too, but to make matters worse, she had a name so difficult to pronounce. For me, she played very well but I could not recall a name. It is pronounced differently from the way it is spelled.”

After 50 years of music, she remains close to what matters most to her: her son Otavio and her music.

She realizes, of course, that she is one artist who cannot mix music and financial acumen with equal result.

“Some artists are very good at that—being a good musician and a good investor. That I don’t need money in this career is a lot of bull—-. Of course, I need the money to keep my life going. But it will never be the prime consideration for striving to be a good artist. I like to work hard and being paid but I will never lose sleep figuring out how much I will earn in a season of concerts. My own private fear was that I’d start to play badly if I am preoccupied with money matters. Of course, you cannot live without it, but it will never by my primary concern. It is a means to stay alive but not the deciding factor to become a better artist.”

Proceeds from the Oct. 27 Licad-PPO concert will go to the San Pablo Apostol Parish Church in Tondo, Manila, under the stewardship of Italian priest Fr. Carlo Bittante, of the Canossian Sons of Charity, one of the three Italian Missionary-run charities supported by the Philippine-Italian Association.