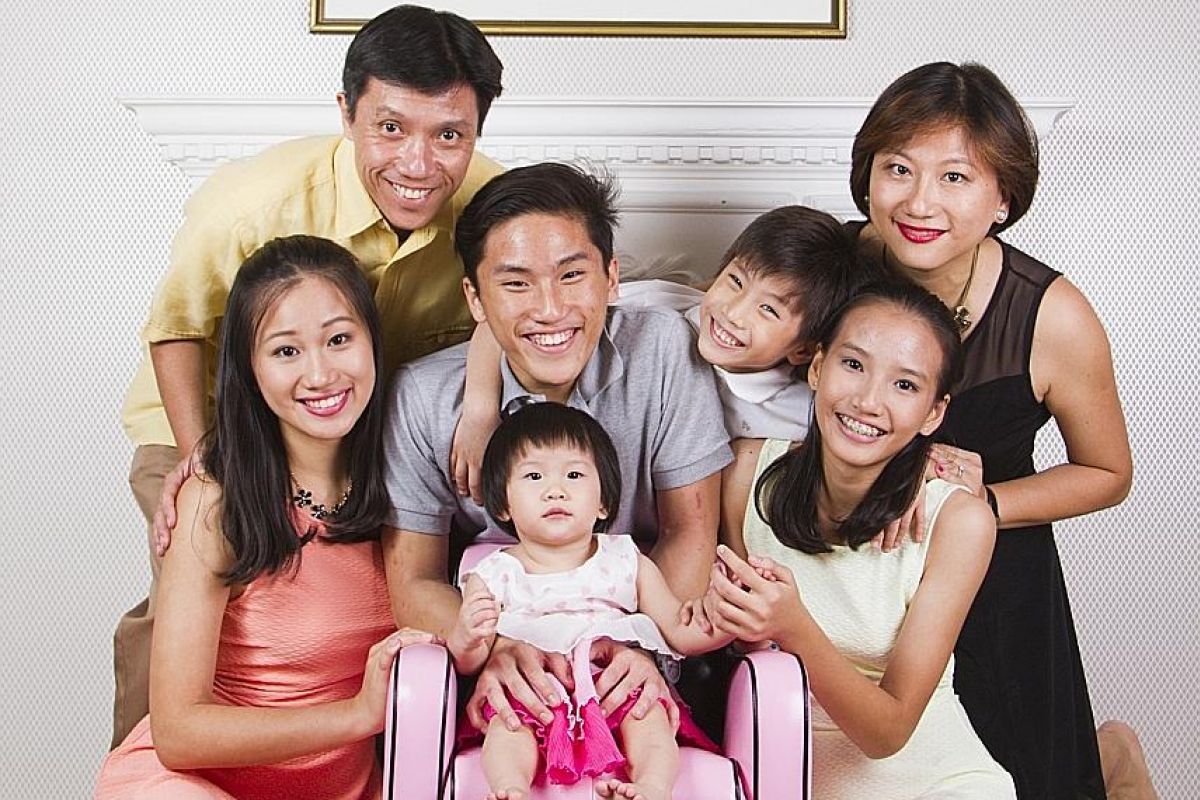 Mr Victor Ong and his wife, Ms Annabelle Chew, spend time individually with each of their five children, (from left, in a 2015 photograph) Christabel, Zachary, Clarisabel, Zaccheus and Clairabel, over activities such as cycling. PHOTO COURTESY OF ANNABELLE CHEW via The Straits Times/Asia News Network

Parents go on dates with their kids to foster bonding

SINGAPORE — As Ms. Annabelle Chew’s family grew bigger over the years, her ideas about spending quality time together evolved.

Ms. Chew, 46, a vice-principal of a pre-school, and her husband, operations manager Victor Ong, 51, have five children aged between three and 21.

She says: “Back when we had two or three kids, I used to think everybody must gather together for family time. But I realized that as the children grew older, they had different needs and interests. It was better to be flexible, to connect with each child, one to one.”

She decided to go on individual outings with each of her five kids, in addition to spending time together as an entire family. Her husband sometimes does so too.

Over the years, their cycling sessions or meals out with individual kids expanded to include spa days or trips to Johor Baru. “The child gets undivided attention. You get to listen to each other. The bonding is a bit better,” Ms. Chew says.

Mr. Richard Hoon, chairman of Center for Fathering, a non-profit organization, recently revealed that his late wife had advised him to “date” each of their three daughters individually, to get to know them better – and he did.

In the article, he said he realized his children “equated love with time” and “all that mattered to them was that I was available for them”.

His story was warmly received on social media.

Other parents who go on “dates” or even holidays with one child at a time agree that it is worth making time to take such breaks from the daily routine.

Going on “dates” sends the message to children that they are special, which helps them feel secure and loved, says Ms. Theresa Bung, who counsels families and couples as the principal therapist at the charity, Family Life Society.

Ms. Kathryn Chai, 49, has gone on individual holidays with each of her four daughters and one son, aged between eight and 23.

With a heavy workload in the banking industry that had involved frequent regional travel, she says she missed out on part of her children’s growing-up years.

“I try and compensate by having one-on-one time with them. It’s how you connect with the child and tell his or her talents and preferences. We become more like friends,” says Ms. Chai, who is married to a 51-year-old academic.

When she was growing up, she herself had enjoyed getting to know her parents one on one, when her mother took her shopping or her dad taught her to swim.

There is another benefit of one-on-one parent-child time: “You see the child on a different ground. You can see his or her limitations and thresholds,” she says.

On one trip in 2010, she trekked more than 4,000m up to Annapurna Base Camp in the Himalayas, together with two of her daughters.

She learnt that Monica, now 20, and Maxine, 23, liked to sing as they trekked, while she preferred to walk in silence. She also saw a determination in Monica, who was about 12 then: Ms. Chai twisted her ankle slightly and both daughters had altitude sickness, but Monica pushed all three of them to complete the trek.

Eldest child Maxine, who works at an international asset management firm, says: “We take care of each other (on trips), it’s more like a friendship. Sometimes, I’m the ‘mum’.”

While overseas holidays with each child are probably too expensive for most families, one-on-one time can take the form of simple indoor activities, says Ms. Josephine Loh, a training manager at Morning Star Community Services, who develops family programs.

She says: “Another way to give undivided attention to each child is to play together.”

Lego blocks, jigsaw puzzles or card games, or sports such as soccer are suitable for younger children.

Parents can organize cooking or baking sessions with their teens or make over their adolescents’ rooms.

Fairness should be observed. Ms. Loh says: “Ideally, both parents should have individual ‘dates’ with the children as each parent plays a different role to the children.

“Parents will need to be fair to all their children in terms of understanding what each child needs so they can explain to the child the different activities, duration and frequency planned.”

Family Life Society’s Ms. Bung says: “One-on-one time is precious. Parents should be mindful to have fun, encourage, teach and share with the child, and not nag. The child may ask to not talk about school, for instance. Neither the child nor the parent should use smartphones or other devices.”

The focus should be on the child, she adds. For example, she has come across parents who say that driving their child to school is one way of spending one-on-one time with him.

“Some people see this kind of ‘dating’ as doing things for the child. But is the child enjoying the conversation in the car or are you? The activity should be enjoyable for both parties,” she says.

Ms. Loh stresses that “dating” is just one way to bond.

“Individual ‘dates’ with children may not work for every family as family dynamics differ. The main objective is to build closer relationships between parents and children, and families can do this in different ways,” says Ms Loh.

For Ms. Harjit Kaur, 46, simple outings with each of her two children helped her impart values to Banipreet, 14, and Jaskirat, 17, when they were younger.

It can be helpful to do things together, such as getting a frozen yogurt, and taking a walk together, as these give the child the space to voice his or her concerns to her in private, says Ms. Kaur.

The freelance trainer in family life education adds: “Just talking may not work and, if the conversation is very parent-directed, it can be like an interrogation.”

Parent-directed or not, just talking on dates can get awkward when the children are older, but parents should do it anyway.

Marketing communications executive Denise Yuen, 24, recalls: “When you are a teen and dad tries to take you out on a coffee date and says to you, ‘Tell me about your life’, it’s awkward at first. You want to try because you see him trying and willing to put himself in that position.

“I’m glad my dad powered through. It was not easy especially during the teen years. My dad actually knows what goes on in my life now, at work and my difficulties.”

What helped her father, Mr. Yuen Chee Onn, was the fact that he had been going on dates with each of his three children since they were in pre-school.

Mr. Yuen, 57, head of engagement and outreach at Center for Fathering, recalls going to the zoo every month for a year because his kids would ask to visit it either individually or as a family.

When the children grew older, they were more self-conscious and took more time to open up to him.

“The bonding that you start in the early days will tend to stick in the later years,” says Mr. Yuen, who worked in banking before joining Centre for Fathering two years ago.

Ms. Yuen, who is his youngest child, says one-on-one time with dad was special because she and her siblings were already spending a lot of time with mum, who was a housewife for 16 years before becoming a relations manager at a Christian organisation.

“It felt different when dad did it. It’s a special feeling. You don’t expect fathers in general to be invested in your life in that way,” she says.

As a child, she used to ask Mr. Yuen to take her on double-decker bus rides for their “dates”. Now, they go for meals or exercise together and she even asks him for relationship advice.

She says: “It’s like we’ve come full circle. It’s back to that child-like sense of having no inhibitions, like when I asked him to let me sit on the top decks of double-decker buses.”