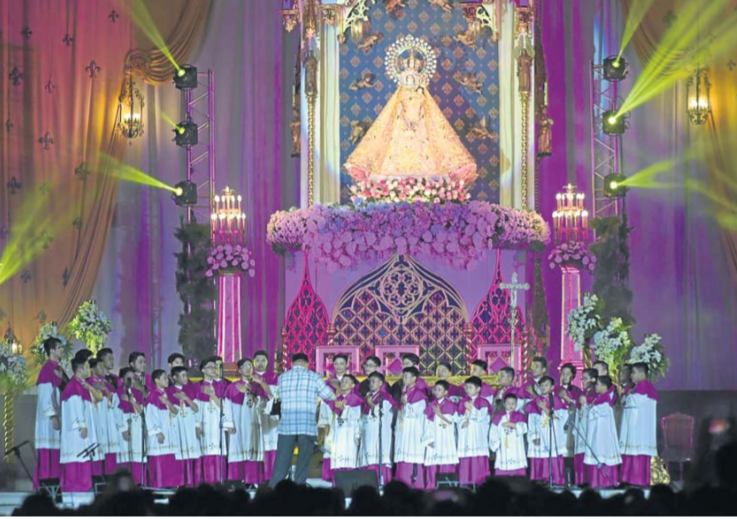 The “Magnificat” concert of classic music at the Santo Domingo Church last Sept. 28 ushered in the annual feast of  La Naval de Manila, the biggest Marian fiesta in Metro Manila. It also ushered in October as Holy Rosary Month.

The concert was held after the customary enthronement of the image of La Naval de Manila from its chapel at the side of the altar to the center of the church.

Tiples de Santo Domingo, the oldest choir in the Philippines,  opened the concert with Giovanni Battista Pergolesi’s “Stabat Mater,” an acclaimed 18th-century composition about Mary as the mother of the suffering Christ, and A. Roa’s “Bendita Sea,” another Marian song.

Under choral director Eugene delos Santos of the UST Conservatory of Music, Tiples next took on Mary Donnelly and George Strid’s “Gloria Tibi,” which highlighted the all-boys choir’s control of its vocal instrument, particularly in the joyful descant at its end.

The boys, whose ages could not be more than 14 years, carried the momentum to the next piece, “A Choral Flourish,” arranged by Linda Spevacek, an upbeat piece that demanded contrasts in vocal textures and dynamics.

To conclude the set, De los Santos passed on the baton to Ireneo Hernandez III, who arranged “A Cartoon Medley.” Visibly enjoying their performance, the Tiples cheerily belted out the mix of songs from popular Disney films—“Let It Go” (“Frozen,” 2013), “How Far I’ll Go” (“Moana,” 2016) and “I Can Go the Distance” (“Hercules,” 1997).

Choir of the World

The two-time Choir of the World, the UST Singers, with Fidel Calalang Jr. as their conductor, started their set singing a capella Josu Elberdin’s “Cantate Domino.” One could simply be overwhelmed by their presence and power of their voices, which filled the massive Santo Domingo Church and brought with it a rather different ambiance.

Their rendition of Claude-Michel Shönberg and Alain Boublil’s “One Day More” from the musical “Les Misérables,” seemed to be the crowd’s favorite from their set, followed by the regulars in their repertoire “Tuwing Umuulan at Kapiling Ka” by Ryan Cayabyab and “Seasons of Love” by Jonathan Larson.

Giving in to the crowd’s warm applause at the end of their set, the UST Singers delighted further their audience by singing the Judy Garland-Barbra Streisand mash-up duet of “Get Happy” and “Happy Days Are Here Again” and the contemporary pop song “Happy,” by Pharrell.

The Dominican Student-Brothers, for their part, sang the “13th Centruy Dominican Blessing” (arrangement by Jonicis Bulalacao; music by Fr. Giuseppe Pietro Arsciwals, OP); “Prayer of St. Francis of Assisi,” by Cayabyab; “The Way You Look Tonight” (arrangement by Dennis Sugarol); and “This is the Moment” (arrangement by Lester Delgado). Their conductor was Nicanor Infante.

Concluding the concert was a grand rendition of the John Rutter’s “Magnificat” by all the participating choral groups, accompanied by the UST Symphony Orchestra, which was conducted by Herminigildo Ranera.

According to Fr. Roland Mactal, OP, prior of the Santo  Domingo Convent and rector of the National Shrine of Our Lady of the Rosary, La Naval de Manila, “Magnificat” was organized by the officials of the shrine for free. He said they viewed it as their being one with the Church’s advocacy to have a “communion of communities.”

“One benefactor of the Shrine told me: ‘Father, don’t forget the poor,’” Father Mactal said in his homily during the enthronement mass, which was held before the concert. “The concert, as with our other projects, is for everyone.”

The traditional enthronement of the canonically crowned image of Our Lady of the Holy Rosary in Quezon City signaled the start of the La Naval festivities, which culminated on the actual feast on Oct. 8. —CONTRIBUTED