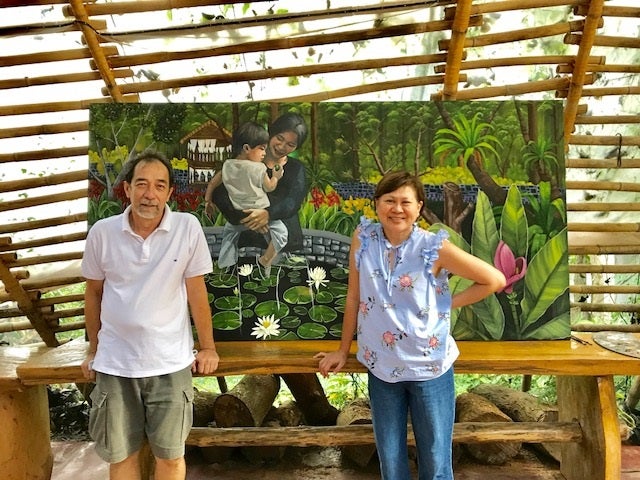 Addie with Jun Tiongco and their collaborative painting

In celebration of the 60th anniversary of World Vision, artist Addie Cukingnan is dedicating her 15th solo painting exhibit to the founder of this world’s largest international children’s charity, Bob Pierce, and his Filipino friend, John SyCip, the artist’s late father. She is also donating to the organization all the proceeds from the exhibit of her paintings these past two years.

Addie, the name with which she signs her paintings, found out early this year that her late father came to know Bob Pierce when the latter was just starting World Vision. Pierce came to East Asia and met John SyCip who owned CALI, a commercial airline which flew him from Hong Kong to Shanghai and back. CALI later joined forces with other fleets to form the Philippine flag carrier, Philippine Airlines. Pierce and SyCip became good friends and the latter helped Pierce in the early years of World Vision.

“I was at the wake of my brother, and she came to condole with me,” Addie told me about her first meeting with Marilee Pierce Dunker, author of “Man of Vision,” a book about her parents Bob and Lorraine Pierce. She is World Vision’s ambassador of goodwill, who came to Manila early this year to look for the heirs of John SyCip.

For the child to live in their fullness is World Vision’s dream for every child, and Addie sends “our prayer for every heart, the will to make it so.” Her upcoming exhibit at the Art Center of SM Megamall, “Addie for Children,” which marks her 20th year as a professional artist, is “all about helping indigent children get an education to secure their future.”

It’s not the first time that Addie is giving a benefit exhibit for children. In 2003, her exhibit at the Podium in Ortigas was for the benefit of United Nations Children’s Fund.   This time, she is coming up with 54 new paintings, including 10 collaborative paintings with Jun Tiongco, Rey Aurelio, Azor Pazcoguin, Flor Baradi, Jeanette Kamphius and Rey Ademis.

A self-taught artist, Addie paints landscape, still life and figures. But she loves painting flowers most. She painted them as a child whenever she went to Baguio for summer vacations.

“I’d just sketch or paint away the time by my lonesome,” she says. “Now, I paint to my heart’s content in my farm in Tanay.”

Her art blossomed even as she was busy taking care of her family and putting up business.

She also used to run Artepintura Gallery, which she owned together with fellow artists. It is now managed by younger artists, but still aims as it did before, “to discover young talents and help them become successful by exposing them to art exhibits and art fests like ManilART.”

Art runs in the SyCip family. Alan SyCip and New York-based Emily Cheng-SyCip are professional artists. Addie gathered the three of them and the other talented SyCips in an exhibit last year entitled “The SyCips.” Her father’s cousin, SGV founder Washington SyCip, cut the ribbon.

With this exhibit, World Vision will be able to further help its more than a hundred thousand beneficiaries, poor children in the Philippines regardless of religion, race, ethnicity or gender.  And thanks to people like Addie Cukingnan, it is hoped that its 70,000 sponsors here and abroad will grow. —CONTRIBUTED