A hotel in Baguio that blends with environment | Inquirer Lifestyle 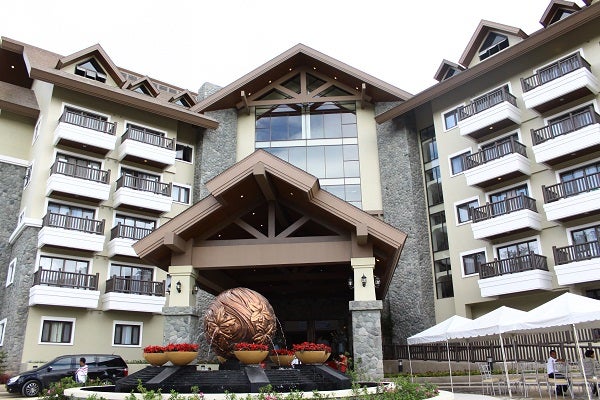 The Azalea Residences in Baguio City has created ways so that it blends in with nature instead of altering it. MATIKAS SANTOS/INQUIRER.net

A hotel in Baguio that blends with environment

BAGUIO CITY, Philippines – A brand new hotel built in the summer capital of the Philippines, Baguio City, has hit the sweet spot by offering vacationers a nature experience without changing nature.

“Blend with the environment, you don’t destroy it, you don’t alter it, but you blend. That’s our role of trying to help out,” said Dulah Lipardo, Chief Operating Officer of Azalea Resorts and Residences.

“When we developed this place we had to cut some trees,” Lipardo said. But she added that there was a rule in Baguio that when one tree is cut, it has to be replaced with 5 to 10 trees.

Azalea has been taking care of a hundred new trees at Wright Park. “We promise to take care of those trees for two years, our people here visit on a monthly basis,” Lipardo said.

The hotel has also established a segregation program to take care of their garbage to “minimize and do not contribute to [environmental problems],” Lipardo said.

Baguio had previously suffered a garbage avalanche in late August of 2011 when the retaining walls of the Irisan Dumpsite gave way after a large amount of rain was dumped by typhoon Mina (international name Nanmadol).

According to the 2007 census, Baguio has a population of 301,926. This has led many to believe that the garbage landslide was due to the large population of tourists in Baguio.

“We know there’s a lot of opportunities for us to help Baguio and we will do our share,” Lipardo said.

Patrick Favoreal, the chief executive officer of Enable Hopitality Inc, the management company of Azalea, said that they tried to have as less effect on the environment as possible.

He said that air conditioning was not needed in Baguio which meant additional energy-efficiency. Almost all of the commercial establishments in Baguio, among them a mall giant, do not use air-conditioners because of the cool climate. Private and public vehicles can also be found with their windows down.

Lipardo said that they also have energy saving devices in each room. These devices would completely shut off the electricity in a room when there is nobody inside to make sure that there were no appliances or devices left running.

The hotel uses a mix of Compact Flourescent Lightbulbs (CFL) and Light Emmitting Diodes (LED) for lighting in and around the hotel, Favoreal said. CFLs and LEDs use significantly lower electricity which gives the hotel better energy-efficiency.

Azalea was envisioned to offer “peace and quiet country living” while still maintaining a close proximity to the city; the hotel is just five minutes away from Session road.

The hotel was also designed with the aim of “maintaining the natural texture and traditional character of the Philippines,” according to their statement.

The 5-story Azalea Residences in Baguio has 99 units made up of 46 studio suites, 17 one-bedroom suites, 33 two-bedroom suites, and three 3-bedroom suites. Each unit is complete with living room, kitchen set with utensils and dining table, and toilet and bathroom.