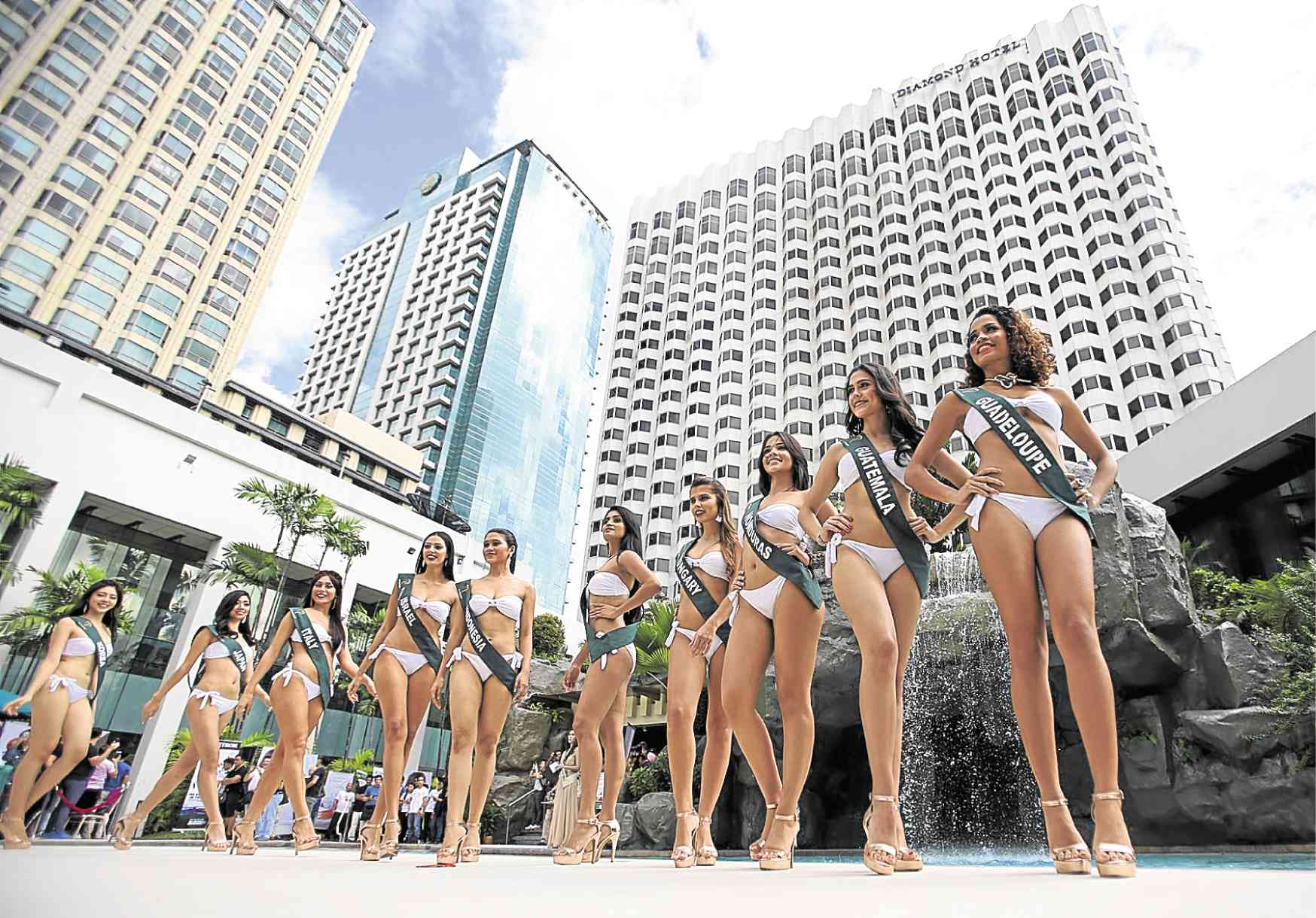 Candidates to the 2017 Miss Earth pose at the poolside of Diamond Hotel in Manila. —JOAN BONDOC

Three Filipino women will be vying for the Miss Earth title in Saturday night’s pageant at the Mall of Asia Arena in Pasay City.

Representing the Philippines is Karen Ibasco, a medical physicist from Manila. Delegates Nina Robertson from Australia and Jacqualine Marsh from Canada, on the other hand, are part-Filipino.

Robertson told the Inquirer that her mother was born in Nueva Ecija but grew up in Mandaluyong City, while Marsh said her mother hails from Ormoc City in Leyte.

Both ladies have visited the Philippines even before representing their respective countries in this year’s global tilt.

Marsh said she been to the Philippines five times to visit her “lolo and lola” and other relatives in Ormoc City.

For both Robertson and Marsh, being part-Filipino help in their quest for the international crown.

“I have both sides supporting me. I have people from Australia, and some people here that support me as well,” Robertson said.

Marsh, for her part, warned of “a huge, loud crowd from Ormoc” during Saturday night’s coronation ceremonies.

However, Robertson cited several unsavory remarks from netizens regarding her representation in the Miss Earth pageant.

“There were people talking on social media, saying I should’ve joined Miss Philippines and it’s not fair, something like that. They were saying I’m not truly Australian,” she said.

“It doesn’t really matter which country I represent, because no matter what gender, race or age you are, we should keep fighting for mother Earth,” Robertson said, citing the pageant’s platform of environment protection and care for the planet.

Marsh is hopeful that her mixed heritage would “give a little bit of an edge, because I know the culture and hospitality of the Filipino that much more.”

Ibasco said she welcomes the participation of the two part-Filipino delegates to the global competition.

“I feel good about it, because it shows that Filipinos are going global,” Ibasco told the Inquirer.

She said she found two more allies in promoting the Philippines to the world, particularly to the 83 other international contestants.

“I know they are representing their own countries, but they never lose who they really are as Filipinos. I hope they help me show the beauty of the Philippines,” Ibasco said.

“Both (Robertson and Marsh) are amazing people. You can really feel the blood of the Filipino in them,” she said.

This year’s Miss Earth pageant is the 17th edition of the international competition by Filipino organizers, Carousel Productions.

Last year’s winner, Ecuador’s Katherine Espin, told the Inquirer that she hopes to relinquish her title to someone who can “speak very well, so she can help promote the environment.”

Three Filipino women have earned the Miss Earth crown—Karla Henry in 2008,  Jamie Herrell in 2014 and Angelia Ong in 2015.