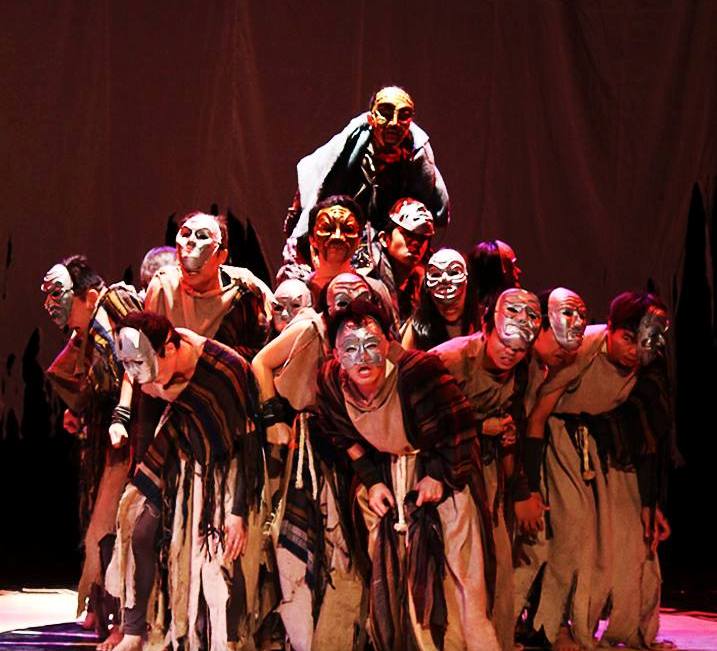 Dulaang Filipino (DF), the resident theater company of De La Salle-College of Saint Benilde (DLS-CSB), did the Philippines proud when its production of “Oedipus” by Sophocles won major prizes at the recent Teatralny Koufar International Student and Youth Theatre Festival in Minsk, Belarus.

The play was performed in Filipino before a non-Filipino-speaking audience.

The awards included Best Performance by Amateur Theatre, Special Jury Prize for the Best Physical and Sound Solution, and Best Actress for Gracielle So. Ezra Ulanday was nominated for Best Supporting Actress.

Dulaang Filipino was the only group from Asia to be invited to the festival, in addition to companies from Belarus, Bulgaria, Brazil, Chile, Mexico, Poland, Russia, Tunisia and the United Kingdom.

“In order for the audience to relate in whatever language they’re speaking, I elevated the importance and use of the chorus, which is one of the conventions of Greek drama,” said director Riki Benedicto.

So, who performed the role of Antigone, said the Best Actress Award was important for her. “I got to bring something home to the people I love, especially my mother. She was my first mentor, and I know how much this award means to her. This experience will always be a constant reminder for me to keep going. Theater has been there with me ever since, and I will continue as long as I live.”

“Oedipus,” first presented in 2014, is an hourlong reduction of Sophocles’ Theban trilogy, consisting of “Oedipus Rex,” “Oedipus at Colonus” and “Antigone,” in Filipino translations by Rolando Tinio and Onofre Pagsanjan.

The production has been performed at the UP Theater Council’s Curtain Call Play Festival in 2014 and at the Mont-Laurier International Theatre Festival in Quebec, Canada, in 2015.

Benedicto announced that the company has already received invitations to stage “Oedipus” next year in the United Kingdom, Poland, Georgia and Lithuania.

The Teatralny Koufar, which is considered one of the most influential youth theater forums in Eastern Europe, is the only international student theater festival in Belarus. Organized by the Belarussian State University, it aims to serve as a transnational platform that unites talented and active young people from around the world.

Since the event was first held 13 years ago, theater groups from more than 60 countries have joined the festival.