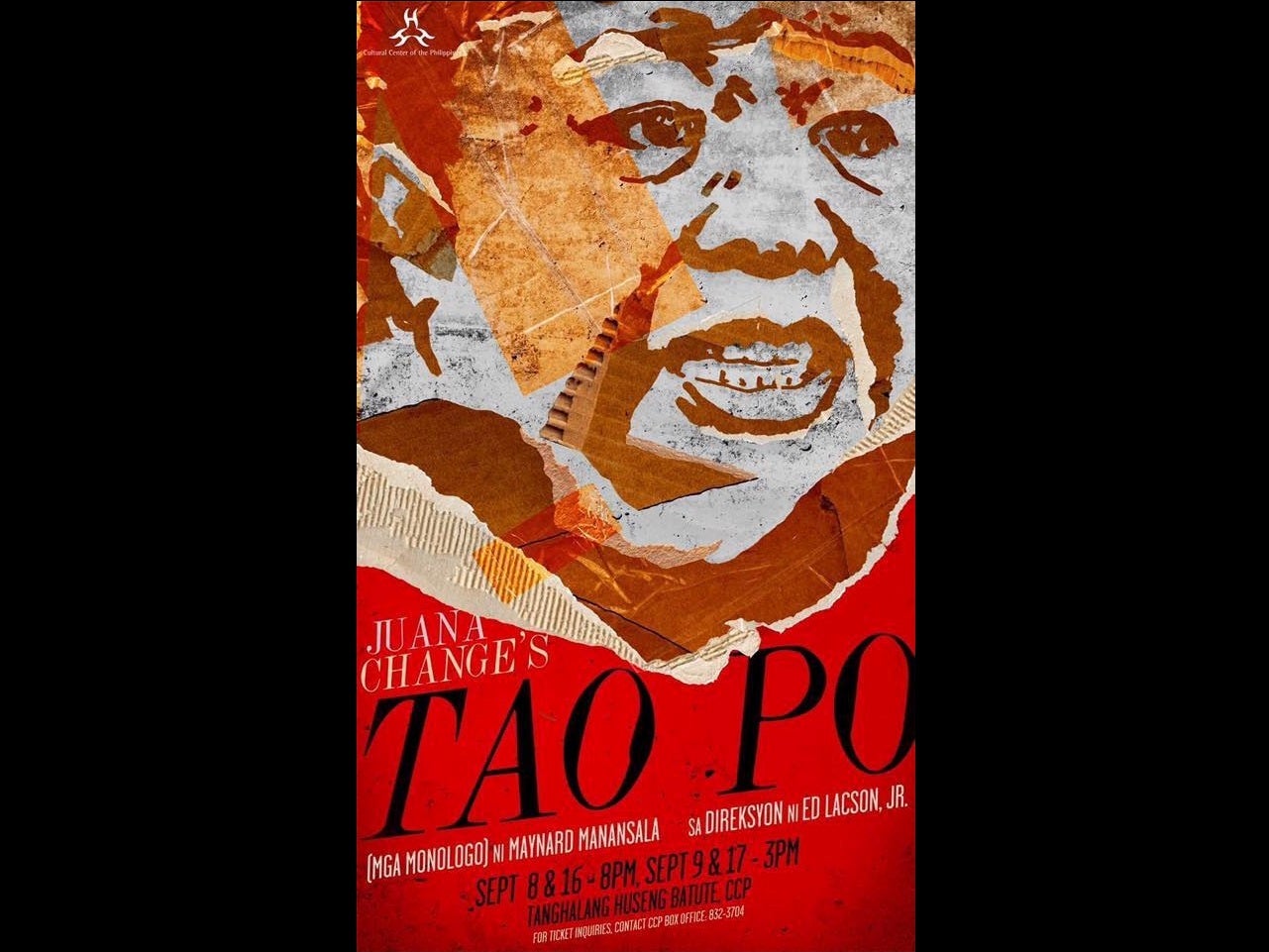 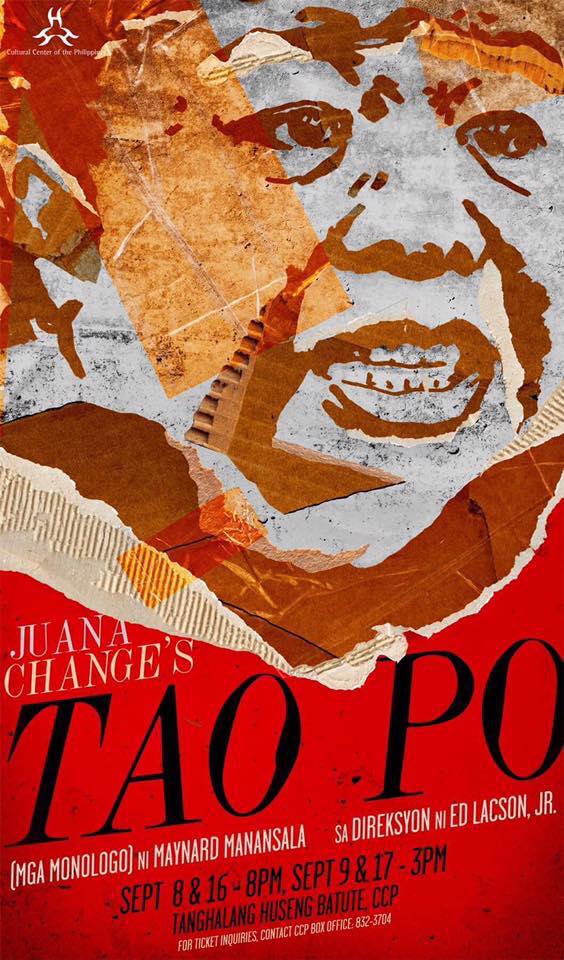 How true is the rumor that Mae Paner, popularly known as the political satirist Juana Change, sold her car to finance her advocacy play, “Tao Po,” a monologue exploring the lives of four characters affected by extrajudicial killings (EJKs)?

For three decades, Paner was full-time into advertising because she was the breadwinner of her family. Her father died in 1978. When her mother became sick, she and her five siblings had to fend for themselves. Paner was second to the eldest but she functioned as sole provider.

“I paid for their education, the rent and my mother’s medical bills. Wala rin ako naipon halos,” she recalled.

When her mother died, Paner’s other siblings had families of their own. When the youngest finished college, Paner left the advertising firm she co-owned and decided to embrace her advocacies.

She has always considered herself a theater person, having started at the Philippine Educational Theater Association (Peta) in 1983. She was still in her senior year in college at the University of Santo Tomas when she became part of many Peta plays. The most memorable for her was “Panata sa Kalayaan,” which had a world tour.

“First love ko talaga ang theater. It’s where I grew up and regained my strength,” she said.

Prior to selling her car, she said she had sold her house and lot in Laguna: “I had a property that I paid in installment for 15 years when I was full-time in advertising. I had to sell it a couple of years ago, and the money sustained my advocacies as Juana Change. Early this year, it was time to say goodbye to my car.”

She hastened to add it was not only the amount she got from selling her car that financed “Tao Po.” She initially asked some friends for help: “Nagkandautang din po ako, kasi matagal bago ko nabenta yung kotse.”

Every night a new show

Why theater as the platform for her anti-EJK advocacy?

She explained: “When you do theater, every show is a new show, iba iba ang audience mo, it’s always buhay na buhay that way. Mas madaling makapagpabago ng kamalayan through the arts.”

“Tao Po” is a one-and-a-half-hour monologue written by award-winning playwright Maynard Manansala and directed by Ed Lacson Jr., with Rody Vera as dramaturg.

It is based on real people. One is about a widow, Nanay Rosing, a Zumba instructor in her barangay being visited by the ghosts of her son and husband, both EJK victims.

There’s also the story of a young girl whose parents were shot by unknown assailants in front of her. “When she held her mother who was shot in the head, her hand passed through her mother’s broken skull and she felt her brains. Imagine the trauma,” said Paner.

Another is based on the experiences of former Inquirer photographer Raffy Lerma, who has documented the wave of EJKs night after night and even earned President Duterte’s ire for his award-winning “Pieta”-like front-page photo.

“He’s become personally attached to the people left behind by victims of EJKs. He’s helping them until now to bring justice to their departed loved ones,” said Paner.

The fourth vignette is based on interviews with a cop who admitted being a member of riding-in-tandem vigilantes. “The cop believes he’s doing something heroic because he’s killing for his country. Inamin din niya magkano per head ang nakukuha nila,” said Paner.

The more important part of “Tao Po” is the talk-back session after the show, said Paner. She’s delighted to see how the audience, especially students, would ask questions. “At kung paano sila mag-isip.”

During the sessions at CCP, Aling Rosing and Lerma were present. Some audience members couldn’t help but cry and embrace them afterward.

Through the help of an NGO, Aling Rosing was allowed to sell coffee and turmeric at the CCP to help in her financial needs.

Paner hopes to tour “Tao Po” in schools nationwide and perhaps abroad. “I am a one-man team. I also do the marketing. Mahalaga to reach out to as many people as possible,” she said.

Paner pointed out that there was supposedly a fifth story about an embalmer. “Pero masyado nang mahaba ang play. Maybe in the future puwede nating isama. The play naman is evolving. When we conceptualized it, hindi pa namamatay si Kian (delos Santos, the 17-year-old killed in an anti-drug operation). Now nababanggit na siya.”

Because of her advocacy, Paner has been receiving death threats. But “kung magpapadala ka sa takot, wala ka nang magagawa,” she said.

That fearless attitude in the service of her beliefs is what made Paner sell her car to make sure her play is seen by people.

“But I am happy because I am doing what I love,” she said. “In the past, when I had so much money, hindi ako halos nakakatulog thinking of how to earn more money. Ngayon, nakakatulog ako nang mahimbing, kasi may ginagawa ako para sa kapwa ko.”