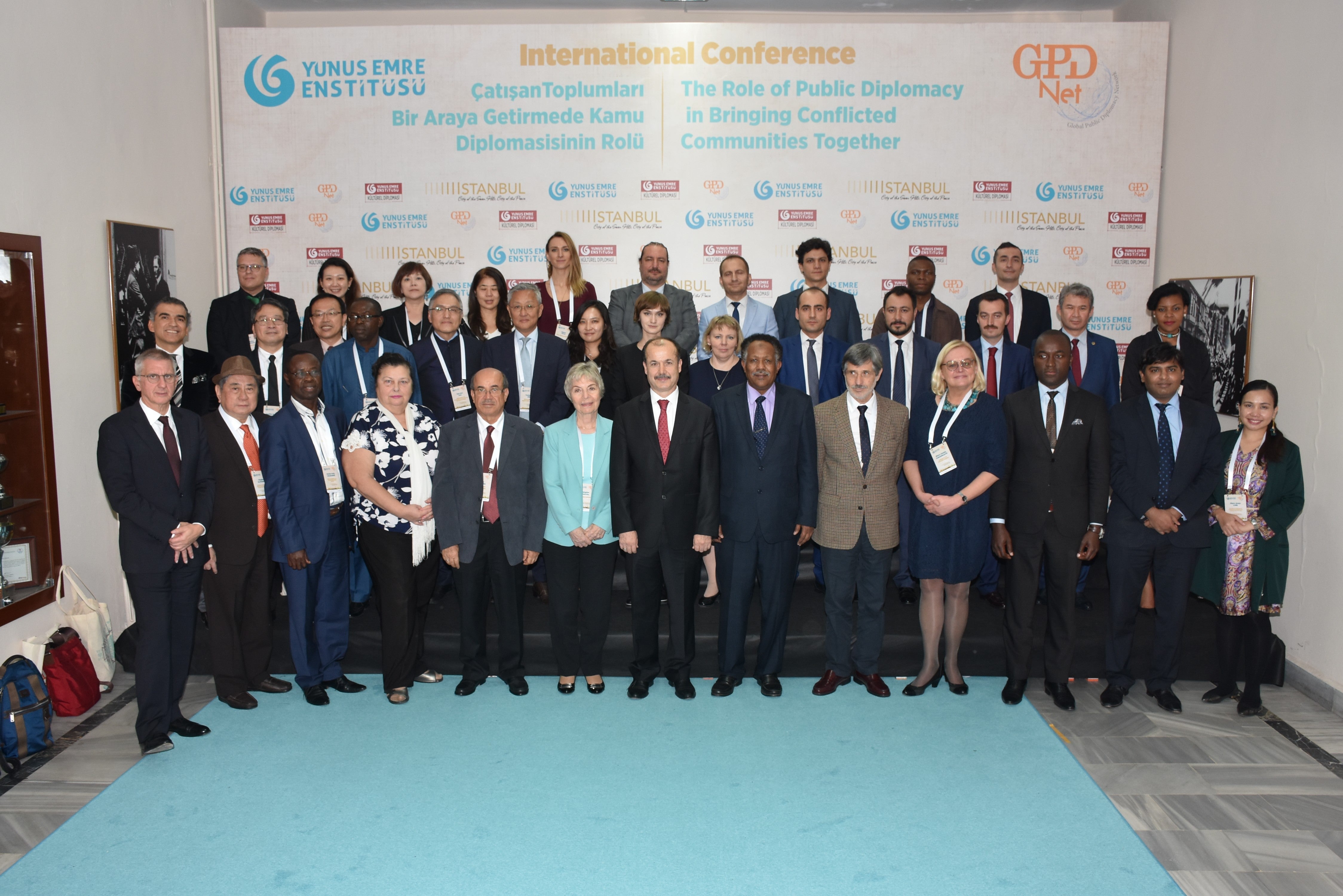 Culture put in the service of diplomacy so as to ease conflicts that arise out of ethnic, religious and geopolitical rifts and rows is the focus of the Global Public Diplomacy Network (GPDNet), a 10-member international group of semigovernment cultural centers and nonprofit institutes led by Turkey’s Yunus Emre Enstitüsü (YEE). The network held its third general assembly in Istanbul on Oct. 19-22.

The National Commission for Culture and the Arts (NCCA), which has established Sentro Rizal in different Philippine diplomatic missions abroad mainly to teach children of migrant Filipino workers Philippine language and culture, is a founding member of GPDNet. During the Istanbul meeting, it was represented by National Artist for Literature and Komisyon ng Wika chair Virgilio Almario, who also heads the NCCA, and Mary Anne Luis of the NCCA  International Affairs Office.

YEE, the Turkish counterpart of the NCCA’s Sentro Rizal, is named after the 13th-century Anatolian poet-mystic Yunus Emre, who composed his works in the spoken Turkish of his own day and region rather than in Persian or Arabic. He is thus considered a founding father of the Turkish language and literature.

According to professor Seref Ates, head of the institute, YEE now has 54 Turkish centers in 43 countries across five continents, holding regular instructions and programs on Turkology and the Turkish language.

Ates is the term president of the GPDNet until 2019.

For 2016-2017 during Turkey’s first year as president, Ates and YEE organized the Anatolian civilization tour and the international storytelling session, “Tales for Everyone.”

Ates said the civilization tour and storytelling session involving people from different cultures and nationalities underscored how culture could be used for diplomacy and international understanding.

“The GPDNet was founded on the belief that soft power contributes to the creation of innovative policy-oriented solutions to issues affecting many countries,” said Ates. GPDNet, he added, is “a platform that contributes to international understanding through cultural and civil-society initiatives.”

When it was established in Korea in 2014, GPDNet was envisioned as a way for “middle powers” to employ public diplomacy initiatives, something that had become pressing in the world today, according to Ates and speakers of the opening-day panel discussion on “The role of culture in bringing polarized and conflicted communities together through public diplomacy.”

Brigitte Nacos of Columbia University noted that the rise of global communication and social media has been both a boon and a bane.

While aiding communication across borders and transforming the world into a “global village,” as media guru Marshall McLuhan put it, it had also resulted in reception problems, especially since “the same news message, the same narrative, the same image can be and is perceived very differently in different political, cultural and religious settings around the globe.”

She warned against “stereotypes” fostered by global communication.

Nacos said that instead of “government-directed information,” public diplomacy should shift its focus on “cultural exchanges promoting language, culture, the arts and sports” as well as on “educational or people-to-people contacts, especially among students and scholars.”

She cited collaborative projects such as the West-Eastern Divan Orchestra for young people, founded 17 years ago by Palestinian scholar Edward Said and Jewish conductor Daniel Barenboim, that continues to bring young musicians from Palestine and Israel together to work for peace by holding concerts around the world.

“Knowing more about different peoples and races and cultures and religions based on personal experiences, meetings, collaborations,” Nacos said, “will not prevent disagreements—but they can help to understand others and temper our actions and reactions.”

Neville Bolt, director of the King’s Centre for Strategic Communications in London, said the world is affected by a “club sandwich of geopolitical issues” driven by “globalization, easternization, Islamization and mass migration.”

Bolt said tensions unleashed by these forces may be aggravated by the social media, which trigger “a pandemonium of opinions and consumption.”

He explained that the social media have given rise to the “era of the image,” in which meaning is given shorthand, reductionist treatment, if not altogether given the short shrift, resulting in “viral engagement” and confusion.

“What we have now are chaotic, nonlinear societies,” the British scholar said. “The unpredictable rule our lives.” He said public diplomacy must employ the old virtues of “tact and intelligence” while also daring new strategies in the spirit of 13th-century Muslim poet Rumi’s declaration, “Now is the time for new things!”

Turkish philosopher Bekir Karliga, cochair of the Alliance of Civilizations, said the world was “facing not a clash, but a crisis, of civilization,” owing to modern, secularist and consumerist society’s ignorance about the “wisdom of the past.” And “ignorance is manipulated by many parties,” resulting in “hate, terror.”

Turkey in fact is cosponsor with Spain of the United Nations Alliance of Civilizations (AC), a 2005 initiative by then Turkish prime minister and now President Recep Tayyip Erdogan. AC seeks to galvanize international action against extremism through the forging of international, intercultural and interreligious dialogue and cooperation. It seeks to defuse tensions between the Western and Islamic worlds.

The GPDNet meeting took place a week before Turkey marked its 95th anniversary as a republic on Oct. 29.

President Erdogan, who has consolidated his hold on government since the coup attempt last year, led the Republic Day celebration.

Although critics have warned against his alleged “neo-Ottoman” proclivities, Erdogan has styled himself as a champion against the West’s imperialist excesses.

During the official commemoration on Oct. 23 of the death anniversary of Bosnia-Herzegovina’s first president Alija Izetbegovic, a friend of Erdogan’s, the Turkish president lashed out at “imperialist bloodsuckers.”

Talks on Turkish accession to the European Union (EU) were suspended after the 2016 coup and due to alleged human rights abuses there, and the stalled talks had further riled the Turkish president.

Erdogan declared European civilization dead as he criticized European countries’ indifference toward the humanitarian tragedies in Syria and Myanmar, where Buddhist military offensives had driven out of the country tens of thousands of Muslim Rohingyas.

“Europe died in Bosnia and it was buried in Syria,” said Erdogan. “The bodies of innocent children washing up ashore are the tombstones of Western civilization. Unfortunately in the last seven years, the old European values have been discredited and destroyed by the very owners of these values.”

Ironically enough, 2017 also marks the 30th year of Turkey as a “non-EU member.” Turkey had formally applied for EU membership in 1987.

Despite the rather charged state of affairs in Turkey, GPDNet members showed plenty of initiatives at cultural diplomacy.

The Chiang Ching Kuo Foundation for International Scholarly Exchange of Taiwan made a demonstration of traditional Chinese tea preparation of the native oolong leaves, which delighted Ates and the other delegates.

GPDNet delegates gave a standing ovation to the dynamic playing of famous Turkish concert pianist Tuluyhan Ugurlu at the Grand Bazaar on Oct. 22, exactly a week before Republic Day.

Aside from the Grand Bazaar and Topkapi, delegates also toured the Spice Market, Blue Mosque and, of course, the Hagia Sophia, the “Church of Divine Wisdom.”

And they took home with them baklava, the many varieties of the “Turkish delight” or pastry. Which should show that cultural diplomacy is the baklava of diplomatic initiatives to heal the world of its geopolitical ills.

Formally accepted as a full member in the Instanbul meeting was the Cultural Village Foundation of Qatar.

Accepted as associate members were the Institute of the Lithuanian Language and Comunidade Academica para o Desenvolvimento of Mozambique.