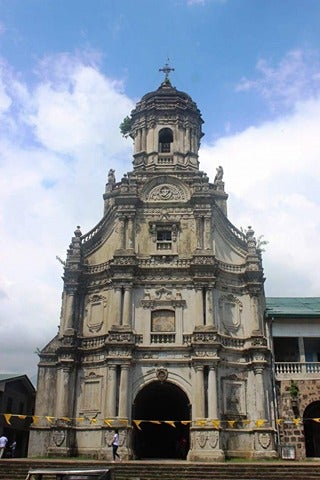 The National Historical Commission of the Philippines (NHCP) has warned the leadership of San Geronimo Church in Morong, Rizal, against the latter’s plan to “enhance” the retablo or altar piece of the ancient church built by Franciscan missionaries in the 17th century.

This was the same church that figured in the heritage controversy over installing LED (light-emitting diodes) lights which punctured and chipped off adobe stones on its famous façade.

In a letter sent to Malvin Mendones, chair of the music ministry of the church, NHCP acting executive director Ludovico Badoy said that the church was an identified historic structure because of a 1939 marker by then Philippine Historical Committee, forerunner of the NHCP.

As a result, any new work on the church or even repair and renovation should be “coordinated” with the NHCP.

He added that “restoration and rehabilitation is allowed,” but “following internationally accepted principles and standards of conservation.”

Antipolo Diocese Construction and Renovation Commission (CRC) head Fr. Noel Rabonza told the Inquirer he had reminded the parish priest, Fr. Bienvenido Guevara, that the project should be a “restoration.”

“That is why I asked them to research first how the old retablo looks like,” Rabonsa said.

It was also Guevara who ordered LED lights be put on the church’s façade last year. They were ordered removed by the diocese following protest from parishioners and heritage advocates.

He reminded church authorities to take into account the concordat between the Vatican and the Philippine government through the National Commission for Culture and the Arts on the protection of church heritage, as well as Philippine laws on conservation and protection of national patrimony, and international conservation principles.

Describing Morong Church as one of the surviving heritage structures in the town, he said that “as a Jeromian student” (Morong parish school student) who helped in minor church repairs, care and cleaning, I know that there is more to the Catholic faith than just a magnificent altar na ‘kasing ganda ng iba’ (beautiful as others).”

A resident who requested not to be identified said that while the concrete altar was not original and done only in the 1980s as a replacement of the older wooden pieces which had deteriorated and been damaged by termites, the parish planned to demolish and replace it altogether.

The resident said funds should be used instead for developmental purposes such as catechism programs, assistance to “visitas” (sub-parishes), and livelihood projects.

The Lipunang Pangksaysayan ng Morong Inc. (Likas Morong) appealed to the Diocese of Antipolo and the parish to “reconsider the plan to change” the retablo and stressed any changes that would be made should be coordinated with the NHCP and National Musuem.

“We do not think that there is a compelling need right now to change the existing altarpiece,” Likas Morong said, “but, instead, whatever funds the church may collect can be used for other worthy projects such as repairing the damage (i.e., small cracks) on the façade of the church due to the installation of the rope lights last year; renewed and more vigorous catechetical education for the young; drug-abuse prevention programs; development of church museum; and enhanced outreach programs for the poorest communities.”

On its official Facebook page, the parish said the project aimed to “glorify God, for the people to feel the presence of the Lord, and a way for unity among the parishioners.”

In Baliuag, Bulacan, the installation of two large industrial ceiling fans—another craze sweeping across churches in the country for the purpose of ventilation—in the 18th-century Church of San Agustin is also being opposed by a number of concerned individuals.

Bulacan local historian Jaime Corpuz said the fans, called “helicopter fans” by critics, would be inappropriate as these did not mix well with the ceiling and the design of the interior of heritage churches. –CONTRIBUTED