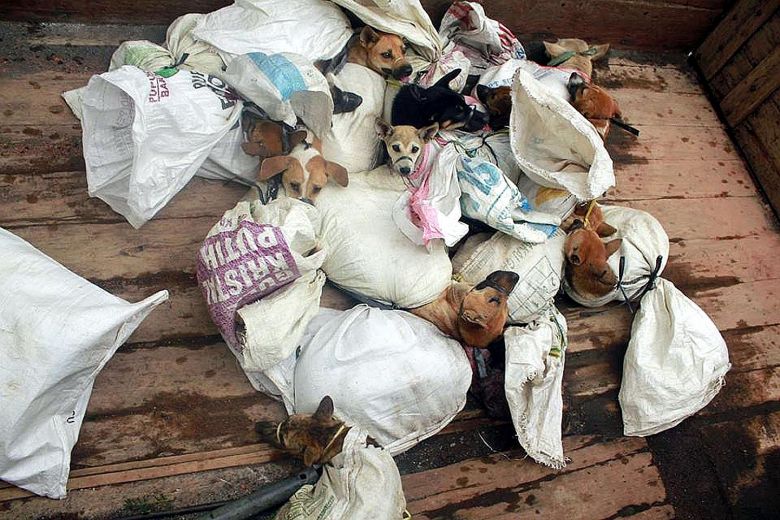 Dogs captured for the dinner table. Dog meat is regarded as a delicacy in many parts of Indonesia. PHOTO: DOG MEAT-FREE INDONESIA

Up to a million pooches are butchered each year to supply the dog meat trade in Indonesia, said a new animal rights group as it launched the “Dog Meat-Free Indonesia” campaign on Thursday (Nov 2).

To raise awareness of the brutality that dogs suffer from kennel to dinner plate, the Dog Meat-Free Indonesia Coalition released a video showing dogs, including pets, being snatched from the streets.

“The… terrified dogs are driven for hours to supply markets, slaughterhouses and restaurants, where they are brutally beaten and then bled out for their meat in front of each other,” said the group.

It is backed by Indonesian celebrities such as Chelsea Islan, Sophia Latjuba and Gamaliel Tapiheru, as well as British actors Ricky Gervais, Joanna Lumley and Peter Egan.

Dog meat is regarded as a delicacy in many parts of Indonesia, including the popular island resort of Bali, where Animals Australia has said up to 100,000 dogs are slaughtered for consumption every year.

Bali Governor I Made Mangku Pastika in July ordered a crackdown on the dog meat trade due to revelations of animal cruelty, and the risk to public health and the island’s tourist destination status.

The Dog Meat-Free Indonesia coalition said it believes “strong actions must be extended to the whole of Indonesia in order to shut down the brutally cruel, unsanitary and unsafe dog meat trade”.

Karin Franken from the Jakarta Animal Aid Network said that although dog meat is consumed by less than 7 per cent of Indonesians, it still “threatens the health and safety of the entire nation”.

The World Health Organisation has identified Indonesia’s dog meat trade as a major contributor to lethal rabies in the country.

The Dog Meat-Free Indonesia Coalition said the trade operates in breach of existing laws and rules to safeguard public health and safety, as well as provisions to protect animals from cruelty.

In Jakarta, dog meat can be found at restaurants and food stalls, and when The Sunday Times visited Jalan Pramuka Raya, it found at least five places serving such dishes. Muliadi Saragih, owner of Lapo Ni Tondongta restaurant, said the dog meat they use is delivered from suppliers outside of the city. Lapo is slang for a food stall that serves ethnic Batak food, of which dog meat is a delicacy.

A customer said: “We refer to pork as B2, because the Bahasa (Indonesia) word for pig, which is ‘babi’, has two letter Bs, while the Batak word for dog is ‘biang’ and has one B, so B1.”

Muliadi’s supplier Yudi, who like some Indonesians goes by one name, said he gets dog meat from towns in West Java such as Bandung and Subang.

Richard Silotonga, 46, an employee at an oil and gas company, said: “Dog meat warms you up, but I have cut down on eating it because my daughter complains that it’s mean of me to eat dogs.”