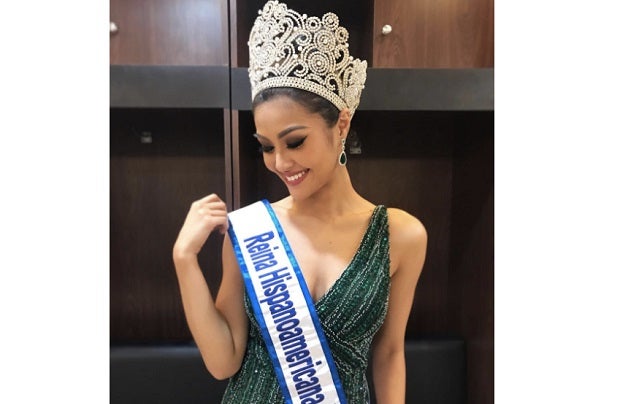 Win-win for PH in beauty tilts

Over in Bolivia, Teresita Ssen Winwyn Marquez was proclaimed Reina Hispanoamericana on Saturday (Sunday in Manila).

Before their coronations, two other Filipino queens posted podium finishes in contests abroad.

In Albania, Binibining Pilipinas Nelda Ibe finished second to Vietnam’s Do Tran Khanh in the 2017 Miss Globe pageant on Friday (Saturday in Manila).

Marquez’s victory is extra special because she is the first Asian to participate in the global tilt, which started in 1991 as “Reina Sudamerica.”

Both Ibasco and Marquez captivated the spectators and the judges with their graceful gait and impressive interviews.

During the question-and-answer round in the Miss Earth pageant, the Final Four contestants were asked “who or what is the biggest enemy of Mother Earth?”

Ibasco, a medical physicist, said the real problem was not climate change.

“The real problem is us, because of our ignorance and apathy. What we have to do is to start changing our ways, to start recalibrating our minds and redirecting our steps because together, as a global community, our micro efforts will have a macro effect to help save our home, our planet,” she said.

Her response earned thunderous applause from the audience in the arena. Some of the judges who were caught on camera were also seen smiling and applauding the Filipino queen.

In her beauty contest, Marquez was asked: “How would you promote Hispanic-American culture with the great difficulty or barrier of language?”

With the aid of an interpreter, she said “language can be learned. But the will and determination to contribute to the organization cannot. It has to come from the heart. It has to be natural.”

The actress added: “I believe that kindness is a universal language. If you treat people with patience, tolerance and love, you will understand each other. The Hispanic culture is not about language only. It’s about love for God, love for country, love of history and culture and love for family. And as a Filipina with a unique heritage, I have instilled that.”

Before she left for Bolivia, Marquez told the Inquirer that she took basic Spanish language classes after winning her national title in the revamped Miss World Philippines pageant in September.

Ibasco was voted by members of the local media as “Darling of the Press” and topped the swimsuit and national costume competitions in her grouping. She also placed second in the gown contest for Group 2.

She placed second in the Miss Personalidad Udabol race in which students and teachers from Udabol University asked all the 27 contestants.

Marquez also finished in the Top 3 in the Miss Silueta Philips (swimsuit) and National Costume competitions and figured in the Top 5 for the Miss Deporta (sports) and Best Smile categories.

Before she left for the contest, Marquez promised that if she would be fortunate enough to win the Reina Hisapnoamericana title, she would use it to “promote Hispanic heritage, because I myself want to learn more about it, especially the language. It’s so rich!”

“I want it to be felt more, especially by the young people. I also want to use (the crown) for the charity work of the Miss World Philippines organization,” she said.

Ibasco, for her part, said: “I will use the crown to continue what I’ve been advocating about and to show people who look up to me that I’m the same person on and off camera.”

She bested 85 other international contestants for the crown. Marquez’s competition saw 27 participants, mostly from Latin America.

The coming weeks will also be busy for the international pageant community.

The Miss International pageant will culminate on Nov. 14 in Japan, while the Miss World contest will take place in China on Nov. 18.

The Miss Asia Pacific International tilt will cap the month with its finals in Manila on Nov. 29.