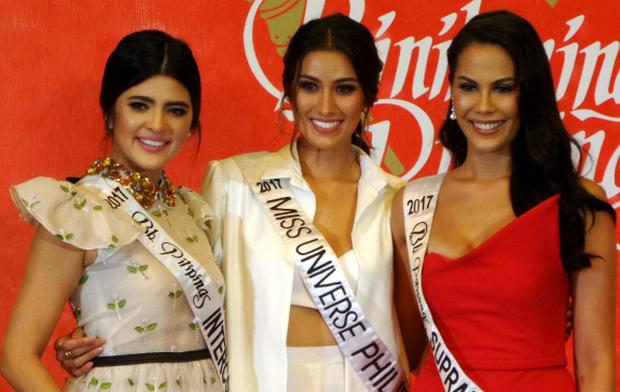 “Everybody is beautiful. Everybody looks good in a bikini,” said the reigning Miss Universe Philippines.

“But the girl who has worked the hardest and the girl who wants it the most will win,” added the entrepreneur and events host.

Peters will leave for Las Vegas on Saturday to compete against over 80 delegates in the 66th Miss Universe pageant, which culminates on Nov. 26 (Nov. 27 in Manila).

She told the Inquirer that she had not personally spoken to 2015 Miss Universe Pia Wurtzbach after winning in the Binibining Pilipinas pageant in April.

But she said the global queen’s message while they were still Binibining Pilipinas contestants served as her motivation to persevere and give her best for the Philippines.

She assured the Filipino people that she had enough training in walking, hair and make up, styling and speaking from the experts.

Thomas will compete in the Miss Supranational pageant in Poland on Dec. 1 (Dec. 2 in Manila), while Rodriguez will participate in the Miss Intercontinental contest in Sri Lanka on Dec. 21.

The ladies said they felt excited for their respective competitions, especially after the winning streak the country had posted this pageant season.

Elizabeth Clenci finished third in the Miss Grand International pageant in Vietnam on Oct. 26, while Nelda Ibe was second in the Miss Globe contest in Albania on Nov. 3 (Nov. 4 in Manila).

Peters quipped: “If you’re asking if I feel any pressure, no I’m not pressured by it. It just makes me more excited to compete.”

She added: “The Philippines sends the most prepared candidates.” /atm