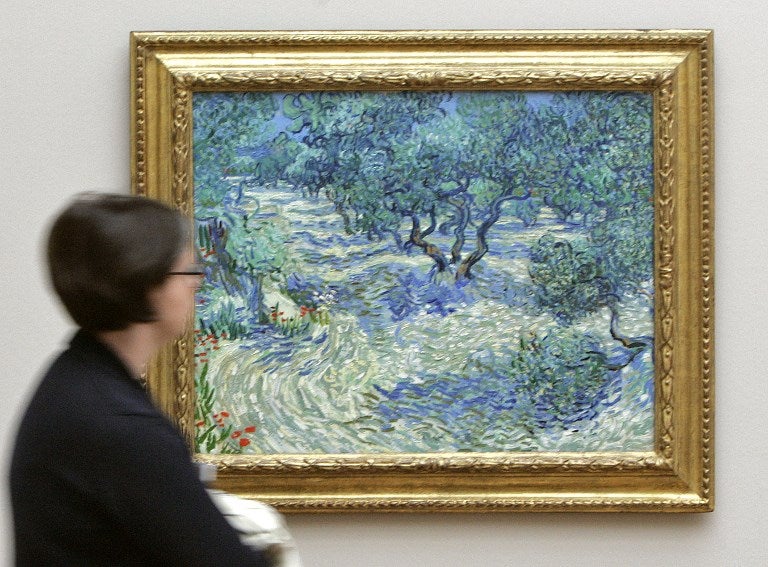 (FILES) File image taken April 23, 2009 shows a visitor looking at the painting "Olive Trees" (Saint-Remy, June/July 1889) by Dutch artist Vincent van Gogh at the Kunstmuseum in Basel, Switzerland. It was revealed by a Kansas City art museum on November 7, 2017 that when conservators at The Nelson-Atkins Museum of Art put this Vincent van Gogh painting under the microscope, they found an unlikely intruder: a grasshopper trapped in the canvas's painterly whirls for 128 years. Mary Schafer, a conservator at The Nelson-Atkins Museum of Art, came across the tiny dried, brown carcass in the lower foreground while studying the painting of olive groves. The find reflects the artist's practice of painting in the outdoors, where it was often windy enough to send dust, grass and insects flying. / AFP PHOTO / NICHOLAS RATZENBOECK / TO GO WITH AFP STORY by Olivia Hampton "There is a dead bug in the Van Gogh."

There’s a dead bug in the Van Gogh

WASHINGTON, United States — When a Kansas City museum put a Vincent van Gogh painting under the microscope, it found an unlikely intruder: a grasshopper trapped in the canvas’s painterly whirls for 128 years.

Mary Schafer, a conservator at The Nelson-Atkins Museum of Art, came across the tiny dried, brown carcass in the lower foreground while studying the painting of olive groves.

“I was mainly trying to understand the different layers of the painting and how it was constructed, and that’s how I came upon part of the body of this little grasshopper,” she told AFP.

“The fact that we have this little surprise of a grasshopper is a fun way to have a new look at a Van Gogh.”

The find, announced this week, reflects the artist’s practice of painting in the outdoors, where it was often windy enough to send dust, grass and insects flying.

“I must have picked up a good hundred flies and more off the four canvases that you’ll be getting, not to mention dust and sand,” van Gogh mused in an 1885 letter to his brother Theo.

“When one carries them across the heath and through hedgerows for a few hours, the odd branch or two scrapes across them.”

But Van Gogh was no bug killer.

Paleo-entomologist Michael Engel of the University of Kansas told the museum’s team that the grasshopper’s thorax and abdomen were missing, and no sign of movement was evident in the paint around the insect, indicating it was already dead when it landed on van Gogh’s canvas.

“Olive Trees” is part of a series of some 18 paintings Van Gogh completed on the subject in 1889 in Saint-Remy-de-Provence, France, where he had checked himself into an asylum. He died the following year.

Sand also was found in “Seascape near Les Saintes-Maries-de-la-Mer” (1888), a work he is believed to have painted from the beach on the Mediterranean. It is now held at the Van Gogh Museum in Amsterdam.

The Nelson-Atkins museum made its own find as part of an effort involving curators, conservators and outside scientists to take a fresh look at its collection of 104 French paintings and pastels using a variety of tools, including x-rays, ultraviolet light, the microscope and taking minuscule samples of the work.

Looking at a tiny slice of “Olive Trees,” conservation scientist John Twilley determined that van Gogh had used a type of red lake pigment that faded over time due to light exposure. /cbb