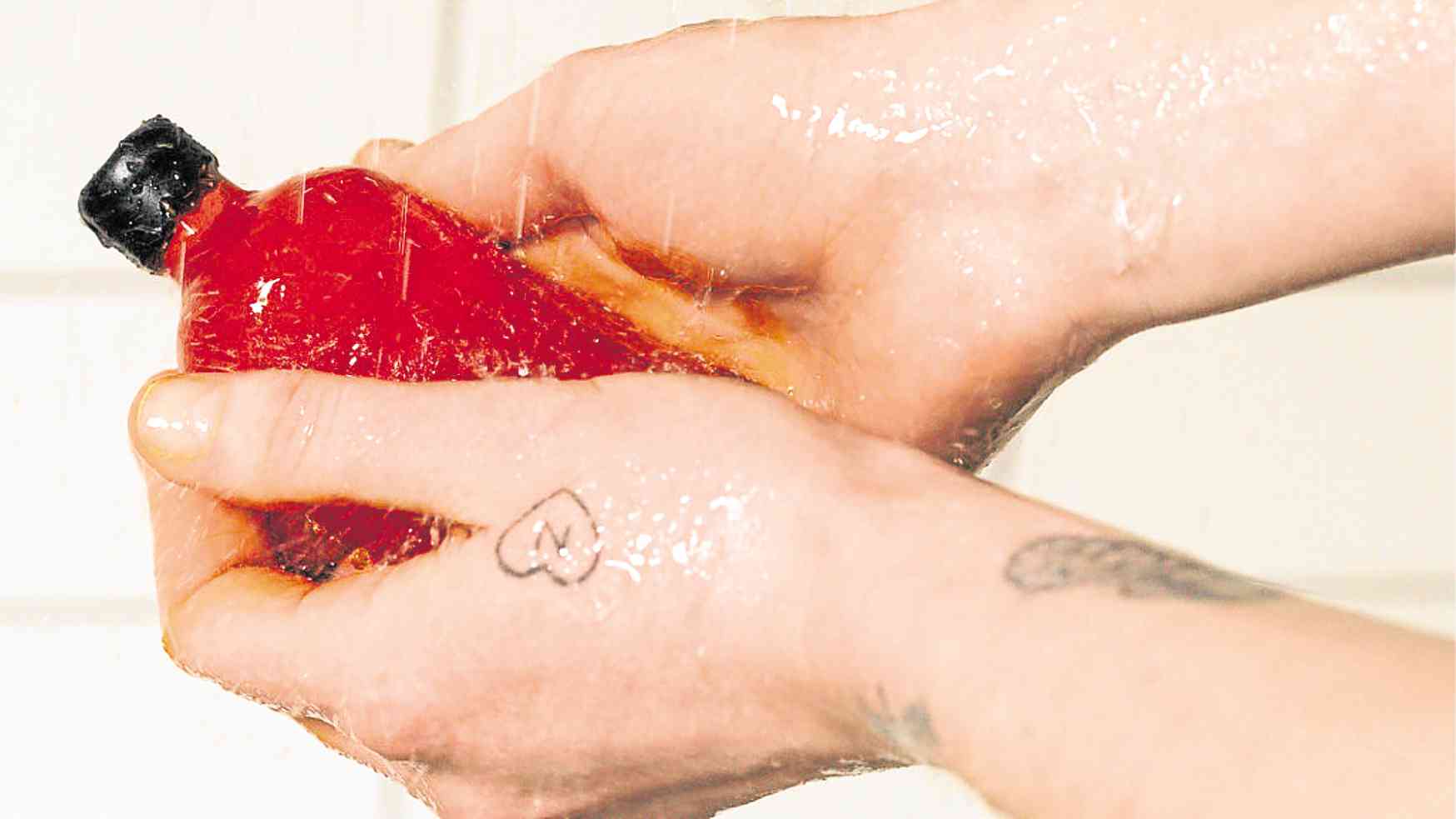 Lush’s story began in 1977, when Mark Constantine met Liz Weir at a beauty salon where they worked. Mark was a trichologist specializing in the study of the hair and scalp, and Weir was a beautician.

Constantine asked Weir to join him to create the Herbal Hair and Beauty Clinic. He read about Anita Roddick and her new business then, The Body Shop, so he contacted and offered her some of his first products.

After Roddick bought the company out, Constantine and Weir began to explore new channels of retail.

In 1995, the entire team of founders ended up back at the original factory on 29 High St. Using leftover soap flakes, some essential oils and a few fresh ingredients from the local market, they began making soap. In the beginning, paint trays and flower boxes became the molds for their soap.

The team decided they needed a name for their new company. They held a contest, and the brand became the Lush Fresh Handmade Cosmetics that people know today.

In line with the brand’s mission to educate the world on responsible consumerism, Lush launched its Creative Showcase in 2016—a gathering of Lush’s employees, people from the press, bloggers, partner countries and VIP customers for a comprehensive presentation on the latest offerings from the brand.

Last September, Lush invited the Philippines (with Stores Specialists Inc. as its partner here) to its second Creative Showcase. The venue for this alternate Lush universe was the Old Billingsgate building in the heart of London, where multiple floors were transformed into an interactive playground.

For music, there were listening stations that featured albums by indie artists whose albums were produced by Lush. The brand strongly believes that by supporting music, they are able to inspire creativity.

The floor dedicated to technology was where attendees were enlightened about the tech innovations for Lush, and also provided a series of talks that covered everything from digital currency to ethical data and virtual reality.

Film is another art form that Lush, via its Film Fund, is investing in by helping independent filmmakers break into the industry and giving them the proper platform and financial support to reach their goals.  Multiple screens with accompanying sound systems were set up where attendees could sit down, enjoy popcorn and learn more about how Lush is supporting films that expose the truths behind animal abuse, environmental degradation and other issues.

Lastly, there was an entire floor dedicated to product. Product stations were all major eye (and nose) candy with their Halloween collection and Christmas goodies. Yes, the bath bombs were indeed the bomb!

Perhaps one of the most popular bath bombs launched that day was the Fidget Spinner-type, which, in true toy fashion, spins once dropped in a tub.

The fragrance stations featured “scent stones” infused with Lush’s prime scents. These stones allow you to take a whiff with ease so that you can smell as many as you’d like, and choose wisely.

The Creative Showcase’s highlight, of course, was the unveiling of its Holiday collection, which, based on history, is one of the most anticipated ones by customers simply because there’s so much variety, and the pretty products make perfect gifts for the festive season.

This particular collection is special because Lush is going the extra mile to save the environment by, for the first time, offering 80 percent of the seasonal range completely “naked.”

Solid or naked products are formulated with little to no water and are, therefore, often innately self-preserving. By replacing the water content with ingredients that remain solid at room temperature, like fair-trade cocoa butter, bacteria growth is inhibited.

In May and June 2015, Lush used naked body butters and saved a whopping 1,572 kg of packaging from being thrown into landfill.

When Lush does use packaging, they use their iconic Black Pots, and these can be returned to the stores, and recycled back into black pots.

A day before the Creative Showcase, Lush launched its naked products at an all-white apartment on Greek Street in London. Entering the Naked House and reading about the negative impact of packaging was definitely an eye-opener.

Product inventor and cofounder Mo Constantine said, “I began unintentionally making naked products, and I’ve gone down that route ever since. My first invention was the shampoo bar in the late ’80s. Since then we’ve taken the concept much further.”

Mark Constantine explained, “Most bathrooms are full of products bought in error because the packaging was eye-catching or there was a tempting offer at the shop. A bottle label and lid cost more than twice the shower gel itself.”

At a time when plastic pollution is a growing problem, it made more sense to push the boundaries just a little further. As part of its exciting Christmas collection, Lush will be launching all sorts of exciting goodies
—from naked solid body conditioners that melt onto the skin,  to cocoa butter massage bars that deeply hydrate and leave skin feeling supremely soft.

Going naked is cheaper, meaning more money can be spent on beautiful ingredients rather than packaging. Some 40 to 50 percent of the cost of a product goes into its packaging.

The gift designers are always on the lookout for ways to cut back on packaging and reduce waste. Head gift designer, inventor and creative director Suzie Hackney said, “We try to reduce waste or reuse packaging. We also use recycled PET or vintage knot wraps. This year we have created recycled pulp bath bomb trays.”

This Christmas, Lush is giving its customers the choice to create a pick-and-mix gift set, which can be wrapped in your chosen reusable knot wrap.

Lush plans to continue cutting the wrap and thinking outside the pot. Constantine said, “We’re all about uniqueness, quality of ingredients, ethics and a lack of packaging, and our new range expands on these values enormously.”

Our third day in London was spent at the Barbican Centre, Europe’s largest multi-arts center, where we were treated to an essential oils tour that displayed the plants and special oils used in Lush products.

All plant-based ingredients were respectfully harvested, meaning they were ethically bought. This is why Lush uses only fair trade, natural and organic ingredients which, unfortunately, do cost a bit more.

The Damask Rose, for instance, produces rose oil, which is used to calm and soothe. It originated in Syria, but its heartland is now nestled in the mountains of southern Turkey. In Turkey, the rose industry relies heavily on migrant labor. Traditionally, Roma gypsies arrive annually to handpick the rose blooms. In recent years, the Roma gypsies have been joined by Syrians able to reach the border.

A visit to Lush’s main office on Oxford Street in London gave us a sneak peak into what exactly goes down at their headquarters. Lush is a company that inspires creativity and takes pride in educating its employees about relevant topics such as environmental degradation.

Promoting social conscience hasn’t always been easy, but the documentary we viewed that day, “The Plastic Ocean,” by journalist Craig Leeson and free diver Tanya Streeter, opened our eyes to the fragile state of our oceans, and suggested working solutions that we can begin implementing right now.

We took a two-and-a-half-hour train ride to the countryside, and began the tour with the first factory in Poole, Dorset, which housed all the bath bomb ingredients. There, we saw buckets and buckets of the most colorful powders you can imagine. (Lush’s bath bombs are made by hand with sodium bicarbonate and other ingredients, depending on the bath bomb.) It takes approximately 24 hours for a bath bomb to set completely.

We visited a couple more factories which housed the soaps and masks separately.  Each factory is led by a manager who oversees production, making sure that each product is handmade. “The products aren’t necessarily perfect-looking, but that’s the whole unique appeal of Lush’s products,” said one of the managers. “They’re made with 100-percent pure love.” —CONTRIBUTED

A version of this article has appeared on lifetyle.inquirer.net.