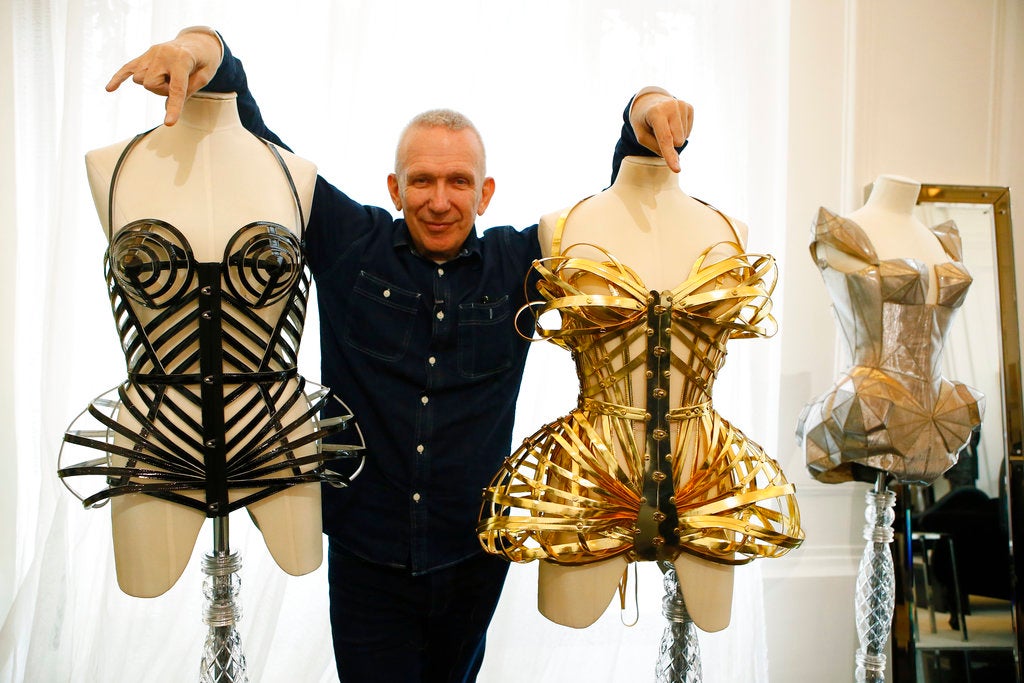 French designer Jean Paul Gaultier poses during an interview with the Associated Press in Paris, France, Wednesday, Nov. 8, 2017. The 65-year-old French couturier announced that a racy, music-filled "show" with all the corsets, sparkle and provocation is in the works for October 2018, retelling his colorful life. (AP Photo/Francois Mori),

PARIS (AP) — All the corsets, sparkle and provocation of French couturier Jean Paul Gaultier are coming to a theater near you.

The 65-year-old announced Wednesday that he has a racy, music-filled “show” in the works for fall 2018 — in which he will retell his colorful life from his roots as a nascent-designer to achieving worldwide fame.

“This show is the story of my life,” the designer said inside his Paris atelier during an interview with The Associated Press.

Gaultier will draw from the people who have inspired his fashions — from filmmakers to pop stars — for the revue-style production that will combine singing, dancing and acting and fulfill his childhood dream of making theater.

He plans to take the production — called “Fashion Freak Show” — on an international tour after it debuts in Paris in Oct. 2018. Although the show is not yet fully written, around half of the cast and production staff has been chosen since he started working on the project two years ago.

“It starts in 1976 — not my birth date, my first collection,” said the humor-prone designer in a playful French accent.

It will, he said, snake through four decades of his life — “different periods of my career”— from his dressing up of his childhood teddy bear aged nine, to the city of Paris in the heady 80s and on to his collaboration with Madonna for whom he designed the famed “Blond Ambition” tour corset.

With exuberance, the designer showed The AP previews of shiny, geometric corsets that were designed for Madonna, Kylie Minogue and Beyoncé and worn by all three.

“It’s all going in. Everything,” Gaultier said of the garments.

The show also will feature a surprise celebrity appearance, he said.

But Gaultier, whose sense of humanity is always palpable even through his humor, said the show will also touch on the darkest moments of his life.

In 1990, he was devastated when his partner, Francis Menuge, died of complications from AIDS.

“At that moment, I thought that maybe I should stop (doing) fashion….I wanted to stop. And, after I said ‘no,’ it is not possible. I’ll go on because (it was) our baby, what we had done together,” he said.

He said the epidemic that ravaged the gay community on both sides of the Atlantic should not be forgotten, and education about the impact of the illness must continue.

With Gaultier, serious subjects flit back and forth with quirky ones — and sometimes both merge.

Posing on a fluffy bridal carriage designed for his most recent haute couture show, Gaultier also said that the show will feature “a gay marriage.”

It will reference the divisive protests against the same-sex marriage law approved in France in 2012.

Tickets for the show go on sale Nov. 9. MKH