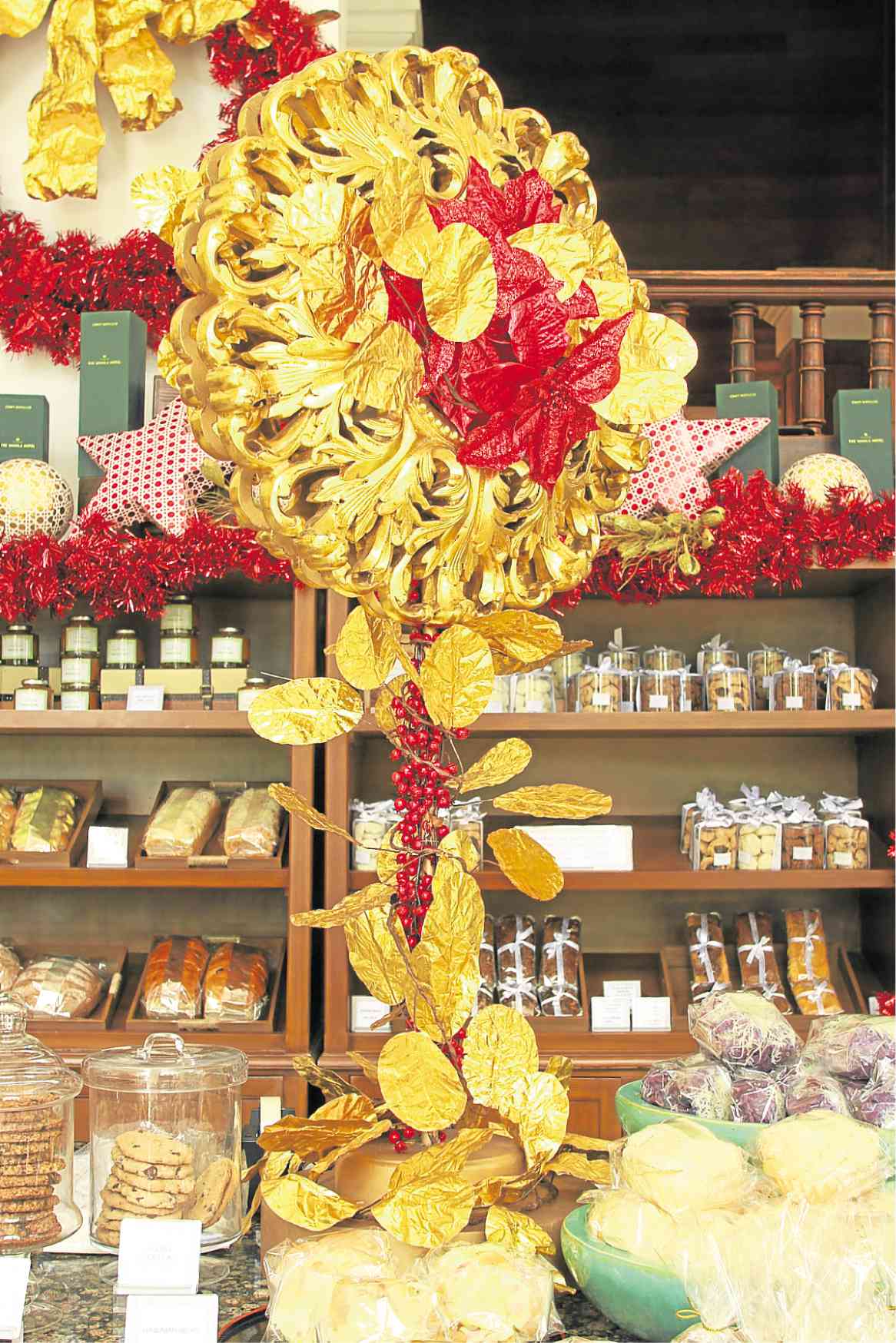 A gold-leaf solar circlet with red poinsettias adorns the tables.

A Filipino Christmas for an iconic hotel

After a period of doldrums, the Manila Hotel is back to its former glory, living up to its reputation as the country’s oldest symbol of luxury and hospitality. The hotel’s style director Rachy Cuna has been adding polish to the faded glory.

He chose the Filipino-themed Christmas to emphasize the hotel’s 109-year history. The Americans built a grand hotel that overlooked Manila Bay and was a focal point of Rizal Park. Through the years, it has been the venue for historical events and the choice of celebrities and presidents.

During martial law, the ownership of the hotel was transferred to the Government Service Insurance System. In 1995, GSIS made a bid to sell the property, which a Malaysian company, Renong Berhad and ITT Sheraton, won over billionaire Emilio Yap.

Yap went to the Supreme Court to fight for the property, referring to the Filipino First policy in the Constitution, which mandates that the State should prioritize qualified Filipinos in owning businesses.

Lending a sense of arrival is a two-story bahay na bato gingerbread house which emphasizes the lobby’s high ceiling and scale. To balikbayan guests, the bahay na bato welcomes them back to their roots.

The first floor is covered by real gingerbread, baked by the pastry department while the second story is built with wood. Authentic capiz windows were installed to add historic character.

The house is adorned with decorative cutworks and grillwork for the ground floor window. The interior is furnished with Filipino étagères from the hotel collection which display Christmas goodies.

Cuna adds fun to the imposing capiz chandeliers by adding parol tails, made from Japanese and gold-leaf papers.

Under a giant capiz chandelier, the lobby centerpiece is a profusion of red poinsettias, gold berries, gilt leaves and Christmas balls with printed patterns of solihiya, a popular weaving pattern.

Known for his exaggerated scale, Cuna pins giant red wreathes on the arches and windows, ties the baluster with oversized gold ribbons and dresses up a high-back wing chair with oversized ribbons for people who want selfies.

The Christmas tree is dolled up with star lanterns, solihiya—printed papier maché parol and giant balls.

Then there are the little details. Papier maché boxes with rococo gold leaf finish are an alternative to hampers. Trees made of red broomsticks with gold abaca stars make a stunning statement in cocktail tables. To draw attention to classic architecture, a row of of capiz star parol cascade down the Doric column.

At the coffee shop, mobiles of origami maya birds, made from solihiya-printed paper, hover the buffet tables.

“I was given a free hand to decorate this hotel. I wanted to bring out the spirit of a Filipino Christmas by using local materials in a different way and working with the hotel team and craftsmen,” says Cuna. —CONTRIBUTED