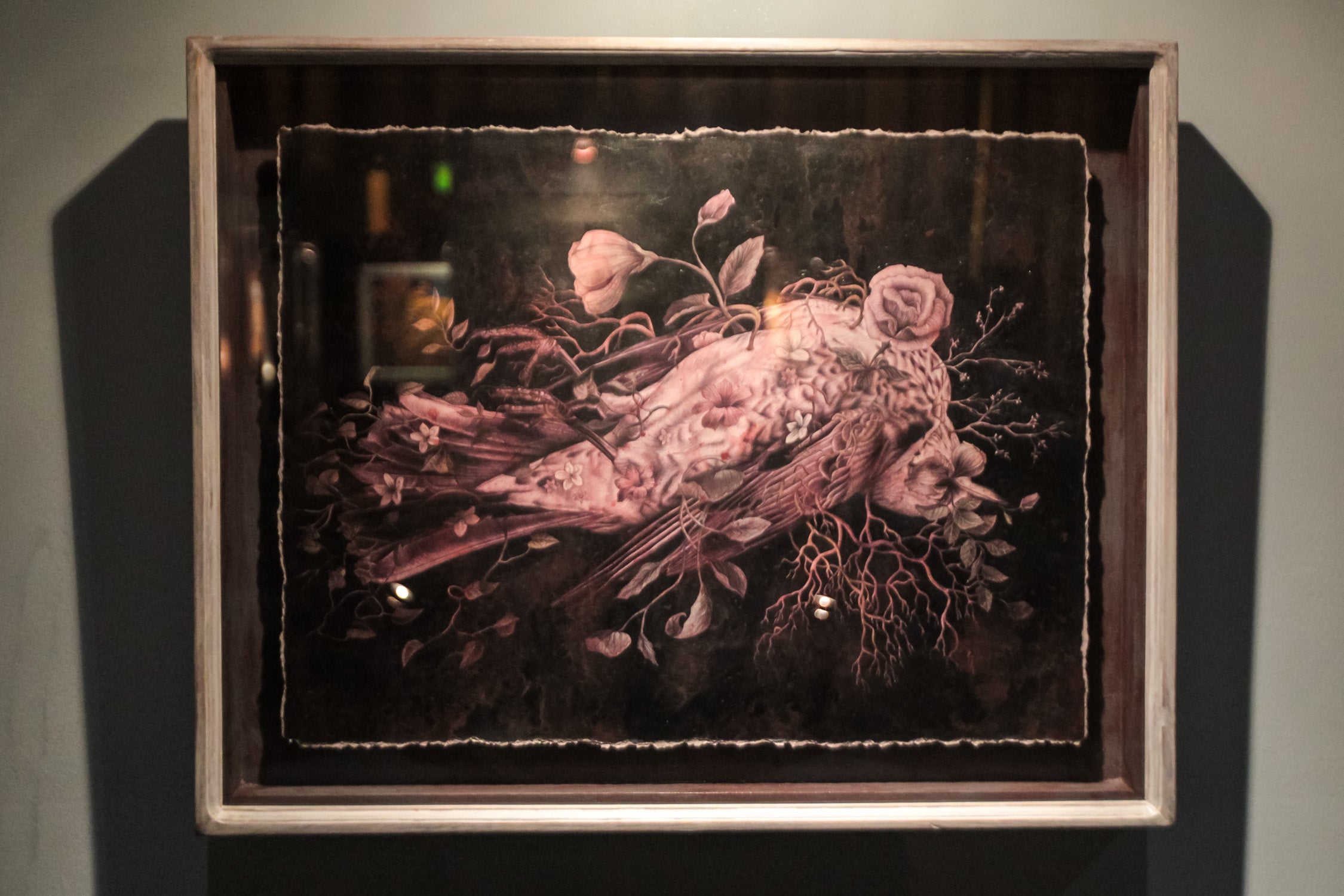 “For Those Who Lived and (are) Forgotten,” by Marvin Quizon, Grand Award winner, Water Media on Paper category —PHOTOS BY LEO M. SABANGAN II

Five seamlessly interconnected human figures soaring to the sky, striated and configured from gleaming brass and stainless-steel rods and capped by a flying paper plane, took home the grand prize for sculpture in this year’s Metrobank Art & Design Excellence (Made).

Titled “Pagtaguyod,” this  rendition of a Filipino family supporting each other as they rise, with a blue paper plane ascending above them, symbolizes the country as a people of “family, faith and hope,” said Bacolod-based sculptor Moreen Joy Austria to Lifestyle. The paper plane represents hopes, dreams and aspirations.

Soon to be commissioned as an actual installation on the Metro Park rotunda in Pasay City, in partnership with property developer Federal Land, “Pagtaguyod” was inspired by the artist’s observation of a young Filipino family. Austria was searching for the rotunda when she stumbled into the Blue Bay Walk and saw a young couple teaching their child how to walk.

“There was just so much love in that family that was hard to ignore. I thought, despite the troubles plaguing this country right now, there’s still hope,” Austria said. “For me, there is more to art than self-expression. I want art to be relevant to the community.”

Like Austria, one of the two grand-prize winners for painting, Marvin  Quizon, also makes art that is relevant to the times. His winning piece, “For Those Who Lived and (are) Forgotten,” is a tribute, he said, to the victims of senseless killings.

The painting, with the haunting image of a lifeless bird surrounded by a growth of flowers, is a reminder of how life goes on after death, symbolizing new beginnings and opportunities.

“Made was founded in 1984 amid economic crisis and political unrest in that period,” said Aniceto Sobrepeña, president, Metrobank Foundation. “On this day, 45 years ago, our country was suddenly seized by martial law. [But] out of that darkness Filipino art emerged as a ray of light. Art became a collective instrument of conviction and recognition.”

Ilonggo artist Paul John Cabanalan, the other grand-prize winner in painting, for example, used his artwork, “Genesis,” to portray chaos and disorder through mix elements like illustrations of varying emotions and sizes, and city buildings.

“We want to be able to show a design that is representative of what we are to today as Filipinos. Next year, perhaps we can do another one for our development at Bonifacio Global City,” said Federal Land president Pascual Garcia III.

Special citations in sculpture went to Abdulmari “Toym” Imao Jr. for his work titled “Monument for the Pursuit of Happiness.” The artist used a canopy populated by migratory birds, now taking the contemporary form of a sarimanok, to depict the many narratives of happiness. Imao is the son of Abdulmari Imao, the first Muslim recipient of the National Artist award.

Also a recipient of a special citation for his work, in painting this time, was Caviteño artist Jett Stanley Osian’s “Tell Lie Vision” (oil on canvas), a work that represents the misinformation fed by social media and the people’s hunger for truth.

Like a scene straight out of a science-fiction show, the painting depicts a gathering of people whose backs are turned to the viewers. Above them, a flurry of TV sets are falling from the sky.

This year, three young painters and two professional sculptors were welcomed to the roster of Made awardees. Australian Ambassador to the Philippines Amanda Gorely and Senator Francis “Chiz” Escudero served as guests of honor.

“The theme, (‘Imagine,’) affirms our advocacy to empower artists across the country to create new worlds and alternative realities rooted in every seedbed of creative genius—the human imagination,” Sobrepeña said. “But more than that it is a call to action. It poses a challenge to every Filipino far and wide to use the power of their artistic judgment to bring color to our nation.”