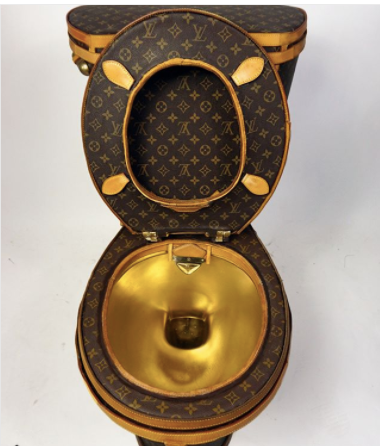 I wondered what 15k of authentic @louisvuitton bags looked like as a fully functional toilet, so I made this.

Ever wondered what it’s like to take a dump in style?

Look no further as Australian-American artist Illma Gore came up with a fully-functional toilet made out of precious Louis Vuitton bags.

As seen in the controversial artist’ Instagram page, the special loo is designed in the brand’s trademark colors of brown and gold and is covered with designer monograms and logos.

“I wondered what 15k of authentic @louisvuitton bags looked like as a fully functional toilet, so I made this,” Gore captioned her post.

The gold-plated toilet is valued at $140,000 (over P7 million) and is made out of a whopping 24 premium leather Louis Vuitton bags.

After spending three months to finish her creation, Gore bared that she had no intention to take it for a test run herself.

“I won’t be sitting on it personally, I think that’s a bit lewd for an event but people will be able to sit on it, interact with the piece as well,” she told the news outlet.

Aside from her over-the-top toilet, Gore is perhaps best known for her lewd works involving US President Donald Trump. /ra