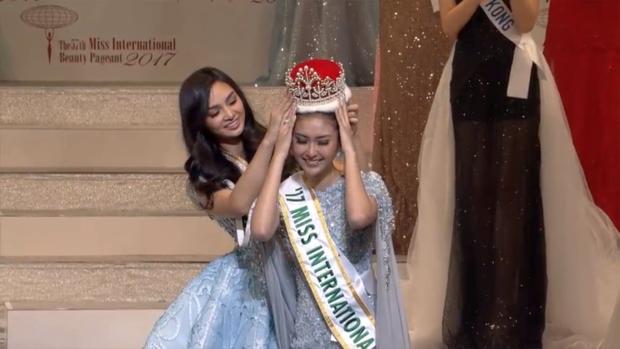 Kylie Versoza of the Philippines passes on her crown to Kevin Liliana of Indonesia, who was named Miss International 2017 on Tuesday, Nov. 14, 2017. (Photo from the pageant organizers)

Indonesian gets Miss International crown; PH bet fails to get into finals

After a strong showing this pageant season, the Philippines failed to secure a back-to-back victory in the Miss International pageant in Tokyo, Japan, as the country’s representative Mariel de Leon missed the cut in the finals staged on Tuesday afternoon.

In a statement, the Binibining Pilipinas Charities Inc. said it “wishes to extend our deepest gratitude to [De Leon] for representing the country at this year’s Miss International pageant. She has exemplified true grace and beauty every step of the way.”

Curiously, only two of the “continental queens” earlier proclaimed advanced to the semifinals – the United Kingdom (Europe), and Ghana (Africa).

Bianca Guidotti also failed to advance to the next round of competition in 2014, a year after Bea Rose Santiago became the Philippines’ fifth Miss International winner.

No country has ever won twice in a row in the Japan-based international beauty pageant.

The Philippines has the second most number of wins in the Miss International pageant, bowing only to Venezuela with seven wins.

Ibasco is the fourth Filipino queen to wear the Miss Earth crown, while Marquez is the first Asian to be crowned Reina Hispanoamericana.

The coming weeks will be busy for pageant fans.

The Miss World pageant will culminate in China on Nov. 18, and so will the Miss Global tilt in Cambodia.

The two contests will be followed by the Miss Universe competition in Las Vegas on Nov. 26 (Nov. 27 in Manila), and the Miss Asia Pacific International in the Philippines on Nov. 29.

The Miss Supranational pageant will be held in Poland on Dec. 1 (Dec. 2 in Manila), followed by the Miss Tourism International in Malaysia on Dec. 16.

The final pageant for the year will be the Miss Intercontinental contest in Sri Lanka on Dec. 21. /atm