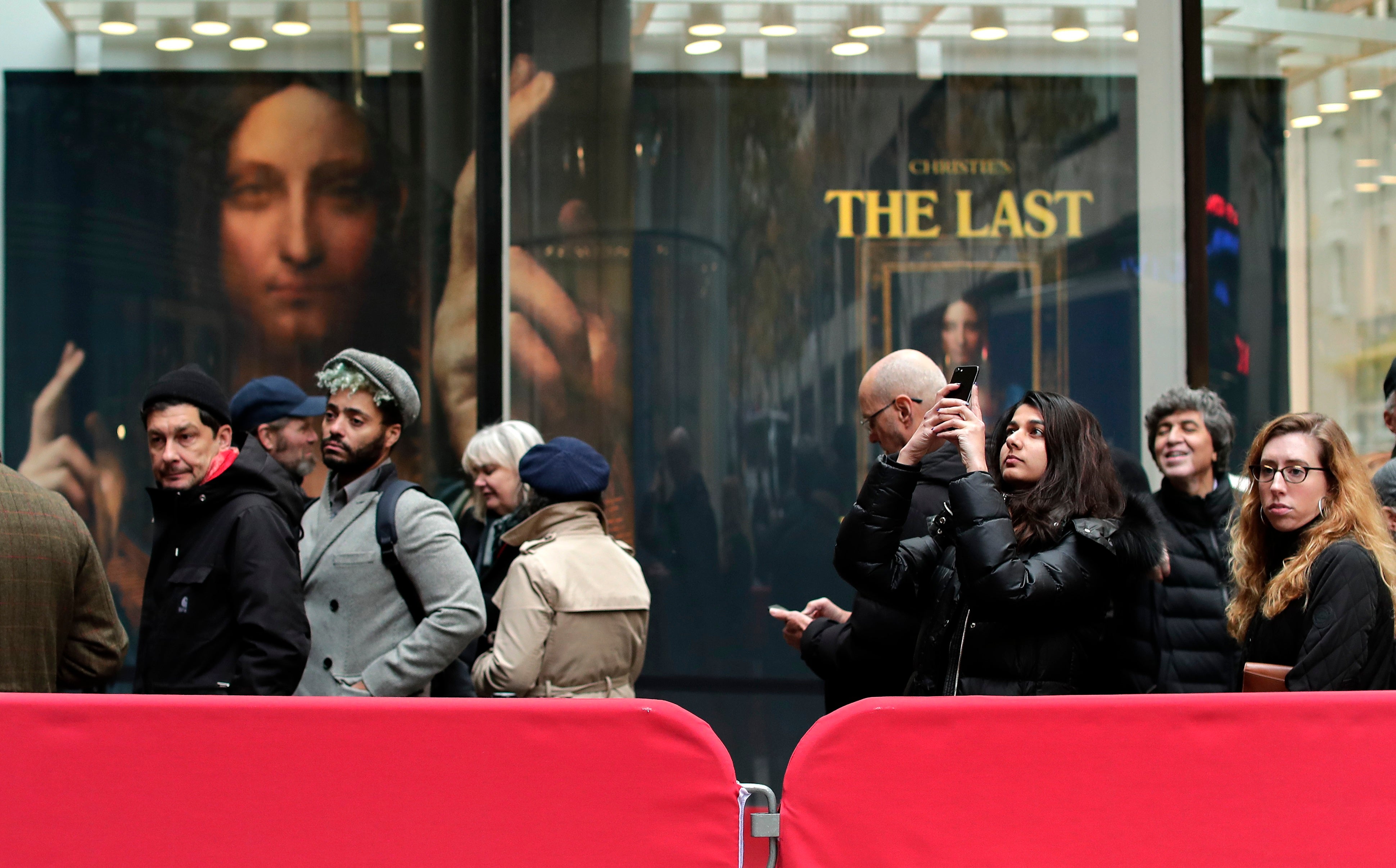 Visitors to Christie's wait outside in a line to view Leonardo da Vinci's "Salvator Mundi", Tuesday, Nov. 14, 2017, in New York. The painting is expected to sell at auction at a starting bid of $100 million on Wednesday. (AP Photo/Julie Jacobson)

Leonardo da Vinci’s rare painting to be auctioned in NY

NEW YORK — A painting thought by scholars to be one of only a few by Leonardo da Vinci to have survived the half-millennia since the artist’s death is set to be auctioned on Wednesday in New York, where it is guaranteed to sell for at least $100 million.

Art lovers have lined up by the thousands at special pre-sale exhibitions in Hong Kong, San Francisco, London, and New York to see the only work by the Renaissance master in private hands.

The 500-year-old oil painting depicting Christ holding a crystal orb, called “Salvator Mundi” or “Savior of the World,” is one of fewer than 20 paintings by Da Vinci known to exist, according to Christie’s, the auction house conducting the sale.

“I can hardly convey how exciting it is for those of us directly involved in its sale,” said Christie’s specialist Alan Wintermute. “The word ‘masterpiece’ barely begins to convey the rarity, importance, and sublime beauty of Leonardo’s painting.”

Wintermute called it “the Holy Grail of old master paintings.”

A backer of the auction has guaranteed a bid of at least $100 million (85 million euros). Experts have said it might be worth more, except for its generally poor state of preservation and lingering questions about its authenticity.

The 26-inch painting dates from around 1500 and shows Christ dressed in Renaissance-style robes, his right hand raised in blessing as his left hand holds a crystal sphere.

The painting’s history is as mysterious as Jesus’ enigmatic gaze, which invites comparison to a better-known Da Vinci work— the “Mona Lisa.”

“Salvator Mundi” was owned by King Charles I of England in the mid-1600s and was auctioned by the son of the Duke of Buckingham in 1763.

It then disappeared from view until 1900, when it resurfaced and was acquired by a British collector. At the time, it was thought to be a work of a Da Vinci disciple, rather than the master himself.

The painting was sold again in 1958 and then acquired in 2005, badly damaged and partly painted over, by a consortium of art dealers who paid less than $10,000.

They restored the painting extensively and documented its authenticity as a work by Da Vinci. The work’s current owner is Russian billionaire Dmitry Rybolovlev, who bought it in 2013 for $127.5 million in a private sale that became the subject of a continuing lawsuit.

Christie’s said a majority of scholars believe it is a work by Da Vinci, though some have questioned that determination while others have said it was so extensively restored that it is probably more akin to a copy than an original.

In New York, where no museum owns a Da Vinci, art lovers lined up outside Christie’s Rockefeller Center headquarters on Tuesday to view “Salvator Mundi.”

Inside, Christ’s face seemed to light up the darkened gallery.

Svetla Nikolova, who is from Bulgaria but lives in New York now, called the painting “spectacular.”

“It’s a once in a lifetime experience,” she said. “It should be seen. It’s wonderful it’s in New York. I’m so lucky to be in New York at this time.”