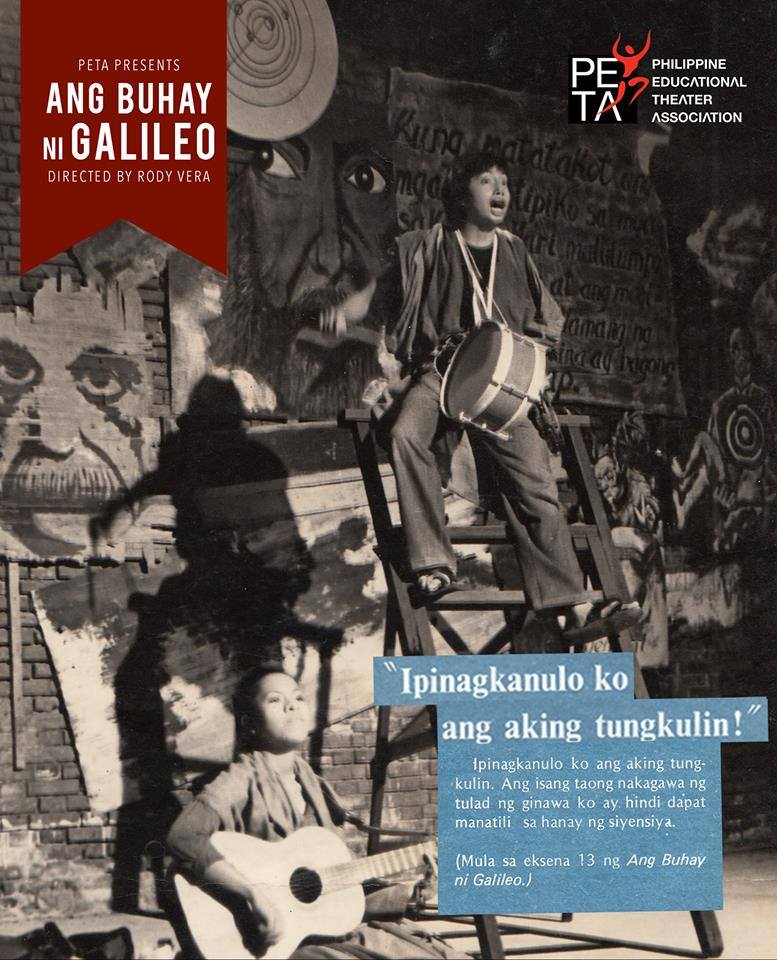 Peta to restage its landmark production ‘Galileo’—for 3 nights only 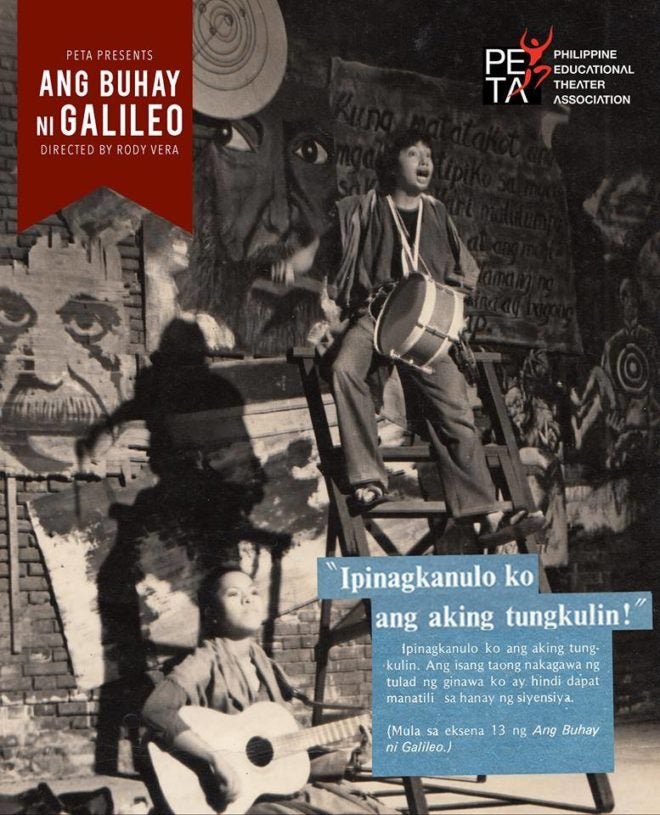 The Philippine Educational Theater Association (Peta) is bringing back one of its landmark productions, “Ang Buhay ni Galileo,” on Nov. 29 to Dec. 1, as part of its 50th anniversary season. Even more significantly, the play will be mounted in Peta’s original home, the open-air Rajah Sulayman Theater in Intramuros.

Translated by Alan Glinoga based on German playwright Bertolt Brecht’s “Life of Galileo,” the play is about the titular Italian scientist’s problems with authorities when he attempts to deliver scientific truths to the masses.

Rody Vera, who is directing the new production, was also already a member of Peta at the time. He recalls Peta inviting Weimar National Theater’s Fritz Bennewitz from Germany to direct the show simultaneously with a children’s/street theater version of “Hatol ng Guhit na Bilog” (Brecht’s “The Caucasian Chalk Circle”).

“I was involved in ‘Hatol,’ but I attended a number of rehearsals of ‘Galileo.’ I saw the play a few times during its Fort Santiago run,” he says.

Vera admits he was quite apprehensive when asked to direct this revival. Soxie Topacio had been originally assigned as director, while Vera was to be the dramaturg.

“My job was to provide him with as much material as possible to restage the play as it was first staged at Rajah Sulayman. But when he passed away, the job fell into my lap.”

More than just simply reproducing the 1981 staging, Vera is focused on what messages the play can convey to 2017 audiences.

“The play was written just before Hitler invaded Europe. It became even more resonant when the atomic bombs were dropped in Nagasaki and Hiroshima. The apolitical stance of scientists who are dedicated to only achieving scientific discoveries without realizing the political implications to mankind is devastatingly presented by this play.”

The relevance of the play, he notes, goes deeper than just merely comparing Galilei’s problems to modern-day issues of fake news and fighting for truth.

“The play also shows how the power that authority wields, whether religious or secular (the State or those who control the economy), can also control the direction and philosophy of science and its pursuit of truth.

“Even in the digital age of information, advances in science and technology have benefited only those who see the immense potential of power and influence these advances can wield for them.

“More advancements in science can only mean more suffering, not just because a scientist like Galileo can give up his control of truths he’s discovered, but also because he has to relinquish that control to other people in power.”