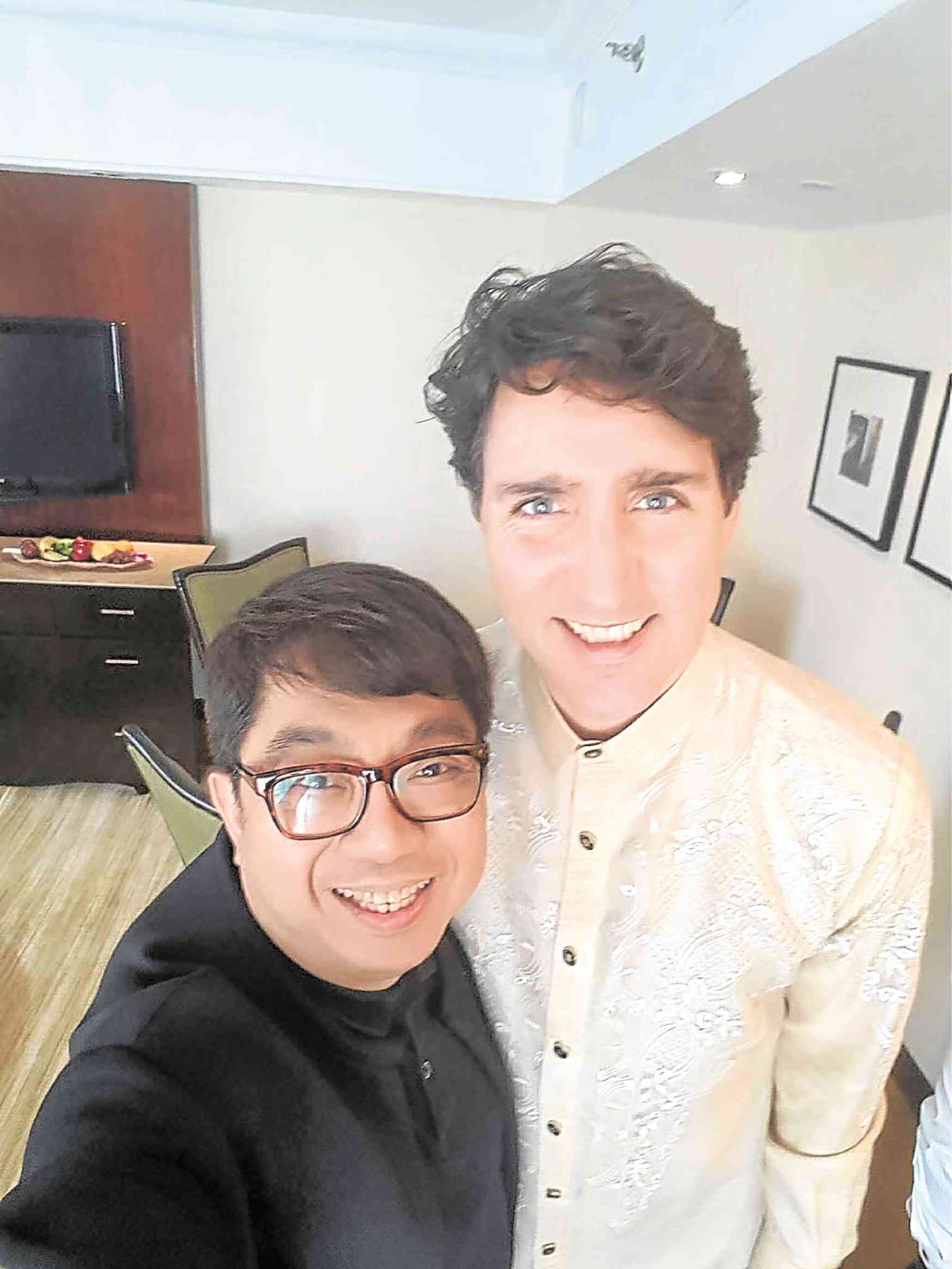 He asked about the proper way towear the barong, says designer Albert Andrada of Trudeau during the fitting of his “Mapagkawanggawa” (charitable) barong —CONTRIBUTED PHOTO

‘I didn’t know na may kiss!’: ‘Kilig’ moments with Trudeau

It was an unforgettable kilig moment.

The social entrepreneur behind Greenleaf Eco Bags and her eponymous shoe brand was with the committee behind a forum held by the Philippine Commission on Women (PCW) on Nov. 13 at the Yuchengco Museum, and attended by the charismatic leader.

The PCW’s GREAT (Gender-Responsive Economic Actions for the Transformation of) Women Project has been an aid beneficiary of Canada.

Trudeau was in Manila to attend the 31st Association of Southeast Asian Nations Summit, and Juan was one of those who had face time with the winsome PM. He wanted to meet the small-scale women entrepreneurs and the indigenous weavers under the GREAT Women Project.

“I was sixth in line of the welcoming committee,” says Juan, “and when he reached me, he said, ‘You’re the shoe lady! You’re doing very nice shoes.’”

The designer was bowled over.

“He called us all by our first names! He did his homework,” she says. “When he talked to you, he made sure to make eye contact. During the forum, where he acted as moderator, he sensed that we were nervous, so he kept reassuring us that, ‘Don’t worry, it’s going to be easy.’ He was also generous with his compliments—he singled out one woman from Bicol wearing a T’boli headgear.”

A known advocate of women’s rights, Trudeau talked about feminism, and how important it is for society to empower women. He also acknowledged the few men present—there were only 40 invited guests—and their role in pushing women’s rights.

Trudeau’s presence, says Juan, was inspiring. Her big moment with him, however, was still to come.

As the forum concluded, the leader gave each of the women on stage a buss on the cheek—and also a big hug for Juan—to loud cheers from the crowd.

“I had my arms outstretched, mainly as a gesture of relief since I was nervous throughout,” Juan says. “I didn’t know na may kiss!”

One man in the audience, shoe designer Maco Custodio, also got a kiss on the cheek from Trudeau, to the audience’s delight.

Another male fan got tickled at meeting the good-looking PM. The day before the women’s forum, Albert Andrada posted an image of a garment bag in social media with Trudeau’s name on it. The fashion designer’s emphatic caption said he had been called to meet the leader, who was to attend the Summit’s gala dinner that night.

Andrada was tasked to make the barong of 20 leaders attending the Summit, including Trudeau, who asked for a fitting.

(None of the other heads of state made the same request, Andrada says. The barong of US President Donald Trump and President Duterte were sent to them weeks earlier, and neither asked for fitting adjustments. So, if you were wondering why Mr. Trump’s barong sleeves were too long and baggy…)

Without hesitation, Andrada jumped in his car and made his way to Trudeau’s suite at Peninsula Manila. “I expected to be made to wait outside his room, but it was him who welcomed me as soon as I walked in,” says Andrada. “He made me feel like we were old friends. He called me by my first name.”

Trudeau, who was visiting Manila for the second time, told Andrada he liked that the barong was fully lined (with cotton silk so it’s not “scratchy,” as another leader described it) so he needn’t wear an undershirt. He also asked about the proper way to wear the Filipino national dress.

The barong fit the trim Trudeau nicely, though its designer was unsatisfied. He felt it needed to be slightly more tapered, so he asked the PM if it was okay to make the adjustments. Trudeau agreed.

“At this point, I asked if we could take a photo together. He said yes. And then he asked, ‘Don’t you want a selfie?’ It was he who offered!” Andrada says with a laugh.

Since Andrada himself was attending the gala dinner, he sent one of his tailors to bring Trudeau’s readjusted barong to the hotel.

Trudeau asked the tailor for Andrada’s phone number, which Trudeau wrote down himself. He passed on a message to the designer: “Tell him I love his shirt.”

But, while Trudeau was succeeding greatly in his charm offensive, another PM chose to express her rather ungracious thoughts about the barong.

In her first press con for the Summit, New Zealand Prime Minister Jacinda Ardern made the barong an object of ridicule in front of journalists and described it as “scratchy” and “quite starched.” She also laughingly declined when asked to sniff the shirt, made of pineapple fibers, on camera.

“I’m glad I was not assigned to make her barong,” Andrada says. “Yes, it is scratchy owing to the material and the weave, that’s why you wear an undershirt. In the barongs I made for the male heads of states, I had them lined to eliminate that problem.”

He adds it was also the request of Malacañang, because the President doesn’t like to feel itchy around the collar when the barong isn’t properly made.

“As a guest in a country you’re visiting,” says Andrada, “it’s undiplomatic to say such things of local cultures and traditions. It’s deemed an insult. Whatever your personal feelings about the shirt, you don’t say it in front of a camera. We must show respect for each other’s culture.”