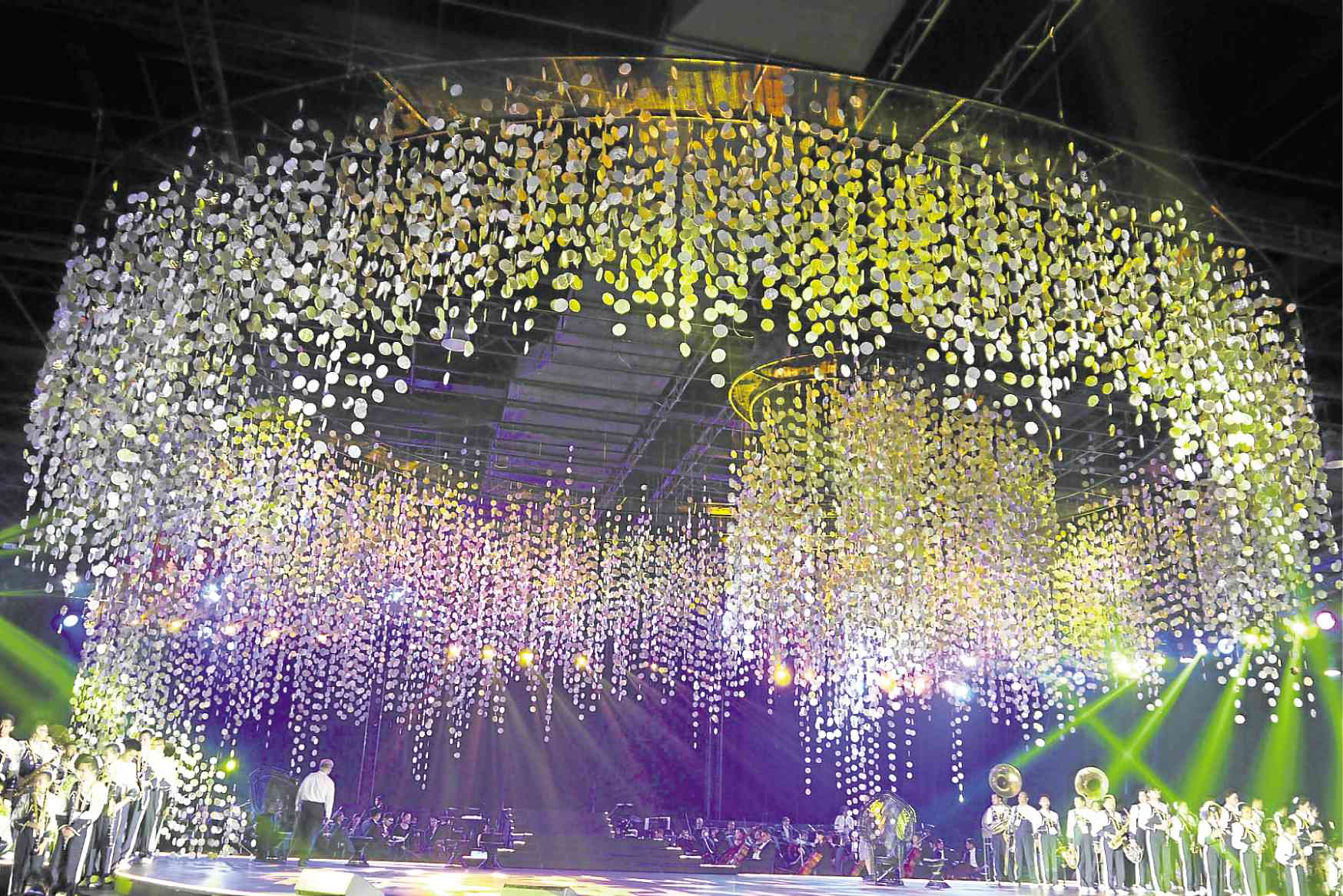 The set design is simple—a halo of 5,000 pulp discs with metallic leafing.

For Asean gala, it was organic materials, human talent over techno gimmicks

The production design was straightforward: native baskets, kraft paper, live plants and clusters of pulp discs—and none of the usual LED screen or video wall.

At the Asean Summit gala dinner last Nov. 12 at the SMX Convention Center, organic materials and human talent eclipsed the usual video or techno gimmicks that have been de rigueur in most productions.

“In my opinion, they suited the personality of the host. You can’t imagine Duterte hosting a dinner with candelabras,” said scenographer Gino Gonzales. The event looked as if it was something the President would do at home—only stylized.

Director and lighting designer Monino Duque envisioned a contemporary ambiance that veered away from clichés such as the audio-visual element and literal Filipiniana motifs.

Design consultant Ito Kish was tasked to create the ambiance, particularly for the pre-dinner reception. In his trademark narrative design style, he created three areas that symbolized the past, the present and the future.

President Duterte welcomed 22 leaders in front of the symbolic bahay na bato which symbolized the country’s historical past. Modernized architectural details were imprinted on a two-story tarp mesh scrim, secured by metal tubes. Kish explained that the transparency allowed the visitor to “look beyond the past.”

A white door with the Asean logo opened to a garden, which represented the present concern for the environment and the planet’s survival. Kish collaborated with landscape artist Oscar Villanueva, who established islands of 20 African talisay trees with olivas, aglaonemas and selaginellas as ground covers. (The trees and foliage have since been replanted.)

Kish also created a 118-square-meter gazebo which served as holding room and meeting area with the President. He cleverly used layers of kraft paper on metal frames for the walls. For a minimalist look, the supplier provided sleek, neutral-colored sofas and woven stools and tables, hence, focusing on warm textures. He made the place homey with pillowcases, embossed with ethnic triangles, and vases from his personal collection.

Asean’s optimistic future was represented by a photo wall of 119 parol or Christmas lanterns forming an eye, with the logo as pupil. Kish explained that the constellation of lanterns symbolized the breaking of barriers and unity in the region.

For the dinner, instead of the predictable capiz chandelier, Kish emphasized the simplicity by clustering inverted native baskets as lighting fixtures over the main performance and dining areas. The customized woven baskets from Bicol were painted in the Asean anniversary color of gold.

The performance stage, which was larger than the Cultural Center of the Philippines’ main theater, was designed as semi-arena with the audience on three sides.

The directive was an abstract set design. Gonzales revealed that his initial concept was to create a chandelier of rattan rings that echoed the organic forms of Kish’s basket chandeliers. However, the cost was prohibitive, given the modest budget.

Gonzales tapped designer Wataru Sakuma of Masa Ecological Development, an organic paper company, to make paper discs out of pulp. They were lined with silver leaf to gleam under the lights. In the venue, Duque insisted on additional gold leaf for extra sparkle. Some 5,000 discs dangled from metal grids, resembling charged lighting particles or capiz discs, resulting in a dramatic display over the stage. The gold leaf on the discs picked up the golden tones on Kish’s basket chandeliers.

“The venue looked as if it was designed by one person,” he said.

The set designer added that the aurora borealis effect of the discs was a reference to the Asean nations’ meeting together for peace, cooperation and prosperity.

In all, Gonzales described the look as intimation of the President’s simplicity or unfussy style. The set designer quoted Duque as saying that he didn’t want any LED display. “Just about every client asks for an LED screen. They seem only comfortable when they see a video.”

He added that Duque, Kish and he came from the CCP, which promotes talent. With the artistry and strength of the performers at the gala, there was no need to compensate with a flashy video presentation or even provide an audiovisual support.

“We put the performers first rather than the palabok (spice) around it,” he said. —CONTRIBUTED