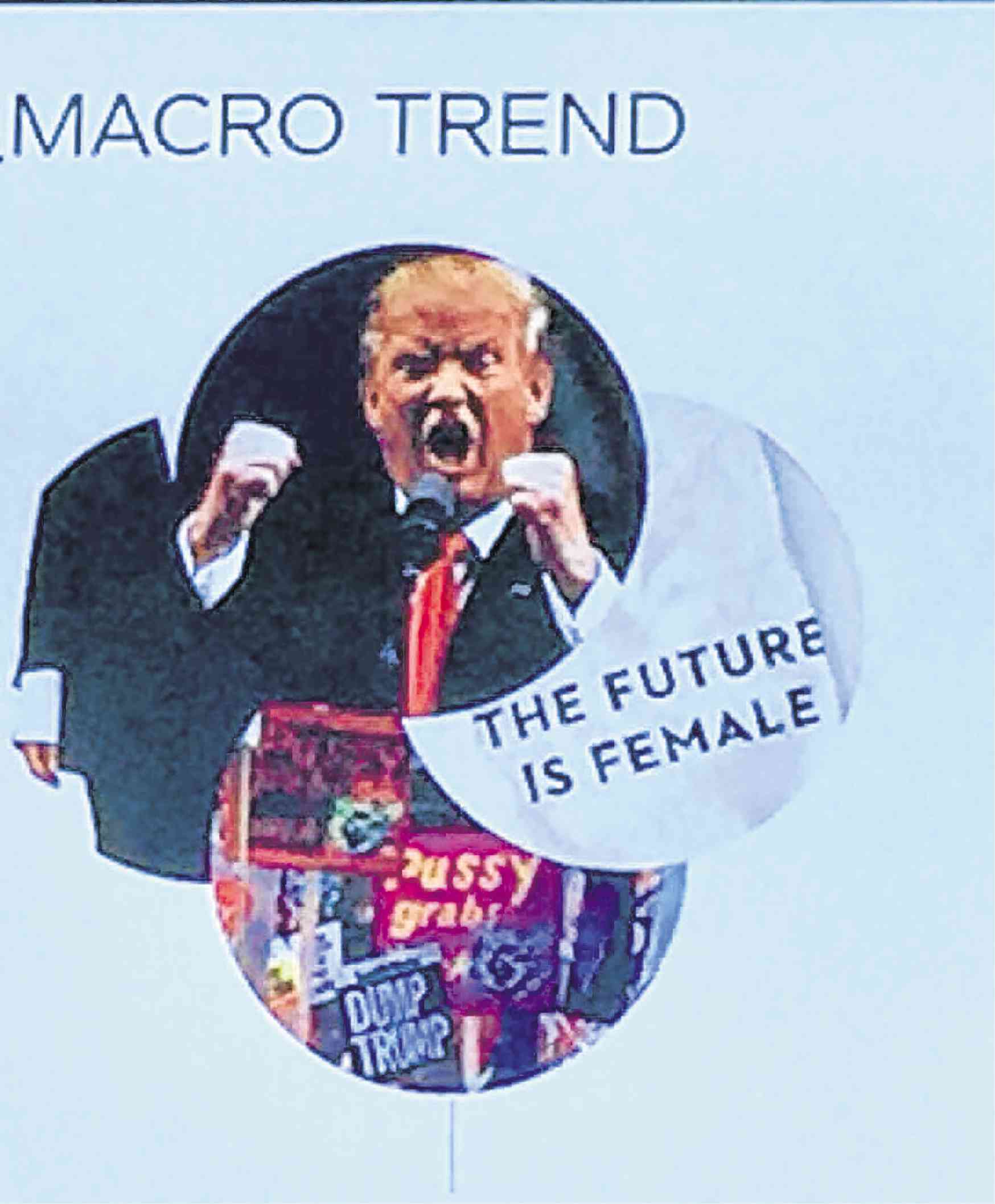 US President Donald Trump, the macro trend that influences the micro trends (in slide presented in the briefing for media)

Yup, like it or not, US President Donald Trump is considered a major influence in today’s fashion trends. This is based on the macro trends seen by Lidewij Edelkoort, the world’s major trend forecaster and once named by Time magazine as one of the world’s 25 most influential in fashion.

This Dutch “futurist,” if one could call her that, travels the world deciphering cultural and social movements so she can map out trends which lifestyle and business brands consider indispensable, from fashion retail to banking, motoring, even food and beverages. (Coca-Cola, Nissan, Armani are among the clients who have used her forecasts.)

Trump belongs to the macro trend—the bigger picture, so to speak—that results in micro trends, in this case, the fashion details. Fashion designers create themes from these trends.

Trump’s sexist—some say misogynist—remarks have spiked traditional and social media through the years, even long before he was elected president. He has drawn flak—or attention, at the very least—for his putdowns of women, from an ex-Miss Universe to Cher. It came as no surprise then that his inaugural in 2016 spurred the Women’s March, said to be the largest protest rally in the US in recent years.

In fashion, according to Moller Henry, this social milieu or global talk translates into pronounced shoulders, exaggerated sleeves, power suits, the focus on waist and other dress features that evoke women power. This proves the dictum that every thesis brings about an antithesis. Or, the more Trump twits women, the more women reassert their collective voice.

As Moller Henry put it, it’s a “female revolution,” no less, in fashion. Coincidentally, it’s quite in sync with the retrospective swing (this has been going on forever) that recasts the looks of the ’80s and ’90s into today’s current vibes, from the women power-dressing of the ’80s (think shoulder pads) to hippie chic (fringe galore). Such dressing of the past era is then given a new millennial aesthetic.

The 2016 Women’s March produced the “now” color— pink!—the symbol of emancipated femininity. According to Moller Henry, pink became so in again, in all its hues, and in combination with orange, electric lilac, denim blue.

Pink paves the way for Vero Moda’s Rainbow Girl in the 2018 collection. Moller Henry said this would feature bolder colors —“It will be a yellow fever and new neutrals. Yellow will take over pink. Yellow is the new pink. The new neutrals are rose, summer browns.”

The Philippine media’s visit to the Vera Moda offices in Copenhagen and Aarhus in Denmark came at a significant time—this year marks the 30th anniversary of this iconic Danish brand and also the 30th anniversary of Bench, the Suyen Inc. firm that brought in Vero Moda to Manila three years ago. Bench is one Filipino brand that has turned global, against all odds, and has even joined New York Fashion Week. Its latest coup is the VMan 2018 calendar with legendary photographer Bruce Weber.

All this has been the master stroke of retail visionary Ben Chan who, more than three years ago, took notice of Vero Moda stores on his visits to China.

“I noted the clothes—very wearable and accessible—and the price points,” Chan told Lifestyle during our Denmark trip. “I knew the brand would connect instantly with the Filipina.”

What followed this love-at-first-shopping, if you could put it that way, was a strategic round of elaborate negotiations with Bestseller, the Danish firm that owns Vero Moda and other leading brands and businesses. It was the modern building of Bestseller in Aarhus—a nine-story monolith designed by award-winning architectural firm C.F. Moller, a design wonder in itself—that we visited last week.

Vero Moda has been in the Philippines for three years now—the only market in Southeast Asia.

“It has been received very well here, especially where there’s strong awareness of the brand, like at Ayala Mall in Cebu, because there are more Europeans in the city who are familiar with the brand,” Chan said.

In Denmark, we realized there could be no better proof of how progressive and fashion-forward the Vero Moda brand is than Malene Malling, its creative director who’s considered a Danish style icon, a fashion entrepreneur, and—this struck our instant affinity to, if not empathy with, her—a writer and magazine editor.

When she told us that good fashion must go beyond the number of social media likes and hits, we knew she had won us over already. Here was a brand champion/design icon who could go beyond the superficialities and perishable moments of today’s fashion and lifestyle.

As she hobbled into the media briefing room—forgive me, she told the room; she sprained her ankle—and we asked her about the fickleness of the millennial market, we knew, upon hearing her reply, that this gritty woman was a mix of sensitivity, pragmatism and creativity.

“That’s the way it is,” she said of the realities of the era that defers to its millennials.

She explained how the “product must win,” not only “what works in Instagram, or producing only clothes that will get likes. I feel sad (about that).”

She admitted that all this social media drama is affecting how designers work.

She described where Vero Moda is coming from in this age of fast fashion—“We must keep our eyes open, look at the streets, travel… Fashion happens even before the catwalk. It is what’s happening on the street, not only on the ramp.”

It’s not all about fast fashion (as the trendy, on-the-rack clothes are known), she said, but about a mix of the trendy and the classical, such as good tailoring and attention to details.

“I prioritize great fit and quality above everything else,” she said.

Malling and her creative team are putting Vero Moda on the forefront of high-street fashion worldwide. There are 1,000 stores in China alone, 900 stores in Europe.

The brand’s progressiveness becomes apparent in its recycled “circular fashion.” Anja Nielsen, its communication specialist for sustainability and HER project, noted how the fashion industry is among the heaviest polluting industries.

The brand’s AWARE collection is sustainable fashion, from its choice of materials to production and the communities it taps worldwide.

It’s a different future, we told ourselves as we listened to how AWARE is produced. But it can be done.

And that’s the good news we will narrate another day next week. 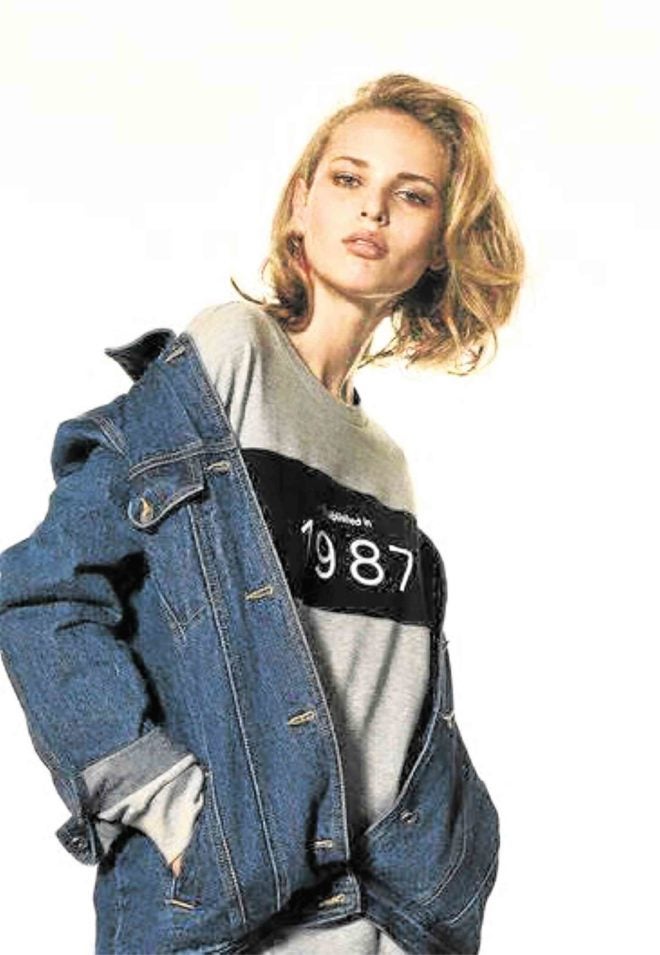