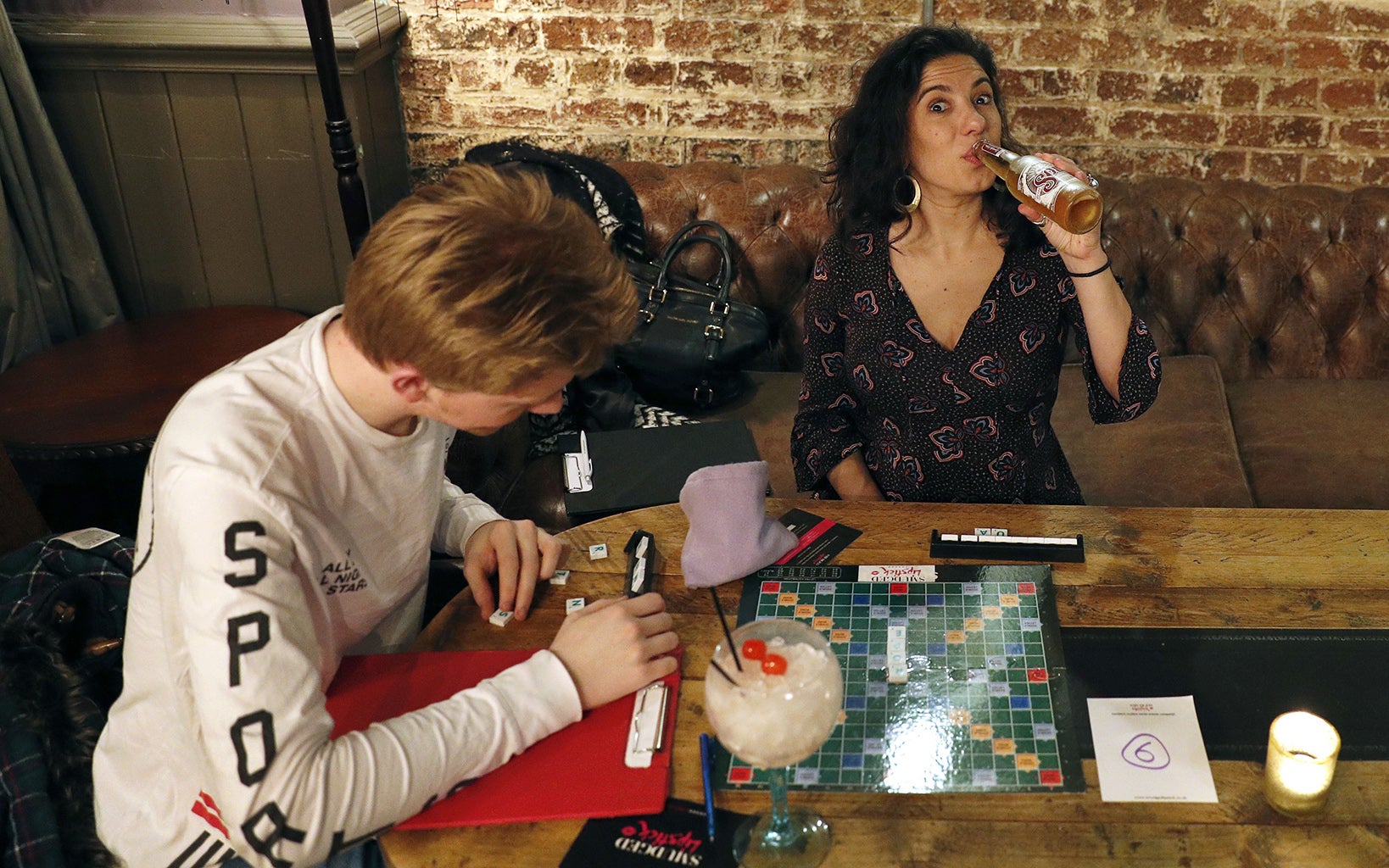 In a cheeky bid to spice up London’s speed-dating scene, a nocturnal events organizer has come up with the idea of reinventing the rules of Scrabble.

On a recent rainy autumn evening, his event—called “Dirty Scrabble”—attracted a small coterie of singletons, young and old, to a cozy pub lounge in the bustling west London district of Hammersmith.

Trendy music, dimmed lights, candles, cocktails, and a naughty game: everything was in place for romance to blossom.

Entrepreneur Jordi Sinclair, the founder of a company called Smudged Lipstick, which organizes “random, quirky events”, is the brain behind the idea of combining dating with filthy wordplay.

“People like Scrabble but in a dating capacity it’s maybe a bit too straight,” the 35-year-old, wearing a black t-shirt and ripped jeans, told AFP.

“Dirty words tend to open up the conversation.”

However, Scrabble is a game of patience which requires the utmost concentration, and seemingly ill-suited to the frenetic pace and emotional tension inherent in the timed meetings of speed-dating.

So Sinclair has devised some new, minimal, rules to his dirty version: no points, 11 letters picked out at a time instead of seven, and the right to take some liberties with spelling.

He hopes players will shed any sense of shame and embrace the maxim: “Where there is embarrassment, there is no pleasure”.

“We try to make it as dirty as possible,” Sinclair said. “After a drink or two, the words become a lot dirtier.

“We want people to be creative with their words as well, so if they want to come up with new words that are dirty, they can.”

True to the speed-dating formula, players move from table to table, with seven-minute games at each.

On the boards, word sequences invariably throw up something to smile about—intentionally or not—and can resemble a libertine conversation.

“There’s been some awful words—everything from penis, arse, gonads,” said Neil Shah, a 40-year-old participant, in a pink sweater.

“But it’s fun… people are relaxed and sometimes using ridiculous language breaks down the barrier so you’re laughing and you’re less uncomfortable.”

Shah believes the art of communication has been lost in the digital age and welcomes anything, including Dirty Scrabble, that means “you have to have a conversation.”

Even better than an app

Scrabble-lover Tamara Jacobs, 34, jumped at the chance to meet a man in the flesh, and not through an online app.

“I don’t really have time to sit around and swipe through a catalog of men to figure out if one of them is worthy of conversation,” she said, turned out for the evening in a floral dress.

On the board, her linguistic sparring partner lines up a slang word for ejaculation.

“Wow, OK… Now we’re getting in the game!” she promptly exclaimed, laughing.

If sparks are not flying between a couple, Dirty Scrabble can help avoid those awkward silences.

“If it gets a bit flustered you can play a couple of words, think of another question,” said Dave Anthony, 32, sporting a t-shirt and beard for the occasion.

“You’re not sitting there like a deer in headlights.”

Later in the night, guests divulge to Sinclair—under strict secrecy—the names of those they would like to see again.

For some, the hunt for a soulmate goes on.

But before the results are even in, the game seems to have worked its magic, as two of his singletons slip out of the bar together.

Could Dirty Scrabble have given them ideas? NVG