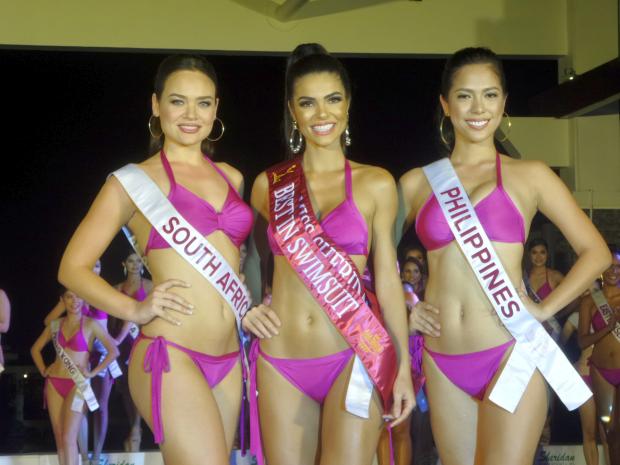 Francielly Ouriques of Brazil (center) was adjudged Best in Swimsuit in the 2017 Miss Asia Pacific International swimsuit competition held on Tuesday night, Nov. 21, 2017, at the Sheridan Bwach Resort and Spa in Puerto Princesa. Chanelle Soncini (left) of South Africa was second, while Ilene de Vera of the Philippines was third. (ARMIN P. ADINA

Francielly Ouriques not only took home the crucial Best in Swimsuit award, she was also proclaimed Best in Palawan Festival Costume for the parade of costumes made by the province’s couturiers.

She was also chosen as Miss Sheridan Beach Resort and Spa.

Lydia Simonis-Tariu from the Cook Islands was chosen as Miss Photogenic.

A handful of corporate awards were also given, aside from the Miss Sheridan Beach Resort and Spa title received by Ouriques.

The Philippines’ Ilene de Vera finished third in both the swimsuit and Palawan festival costume competitions. This is the first time that the Filipino beauty got recognized since the pageant began its activities on Nov. 13.

She failed to secure the local media’s votes for the Darling of the Press award, a title she received during the local Mutya ng Pilipinas pageant.

De Vera was also ended up empty-handed after the talent and national costume competitions held in different locations in Makati last week.

De Vera told the Inquirer that she didn’t expect the podium finishes she made in the two contests, saying: “I was just enjoying the show.”

But she was happy, nonetheless.

“I won not just for me, but for the country,” she said.

The next big competition is the evening gown contest on Nov. 25 at Movenpick Resort and Spa in Boracay.

The 2017 Miss Asia Pacific International coronation night will be staged at the Newport Performing Arts Theater of Resorts World Manila in Pasay City on Nov. 29. /atm