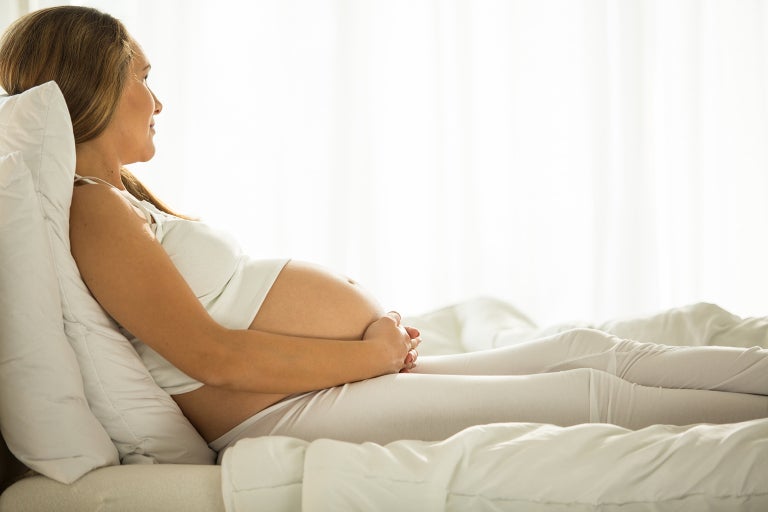 Sleeping on the side reduces risk of stillbirth, says study

New research has found that sleeping on the back during the late stages of pregnancy can increase a woman’s risk of suffering a stillbirth.

Carried out by an international team of researchers including the universities of Manchester and Leeds in the United Kingdom, the study looked at more than 1000 women in England: 291 women who had a stillbirth 28 weeks or later into their pregnancy and 735 women who had a live birth and who acted as the control group.

The women were interviewed about their sleeping positions amongst a number of other factors.

After their analysis, the team found that women who had a late stillbirth were 2.3 times more likely to report going to sleep on their back on the night before the baby died.

The researchers estimate that if no pregnant women slept on her back, late-stage stillbirths could fall by 3.7 percent in England.

Although the study didn’t look at how sleeping positions were impacting on the unborn baby and increasing the risk, they suggested that in the late stage of pregnancy, when a woman is lying on her back, the combined weight of the baby and the womb puts pressure on the mother’s blood flow, which can restrict blood flow and oxygen to the baby.

In addition, sleeping on the back may disturb a woman’s breathing patterns.

Commenting on the findings, researcher Dr Tomasina Stacey said, “A stillbirth is a devastating experience. The message that emerges from this research though, is that women can modify this particular risk factor themselves. When they go to bed, they should try to settle to sleep on their side and not their back — it doesn’t matter if it’s the left side or the right side.”

“They should not worry if they wake up and find themselves on their back,” she added. “The important thing is to commence sleep on their side.”

The news comes after previous smaller studies have also suggested a link between sleeping position and stillbirth, with the new study the largest to date.

The research was funded by four charities, Action Medical Research, Cure Kids, Sands and Tommy’s, with Tommy’s now launching a public health campaign to alert women that it is safer for their baby to sleep on their side.

Around 11 babies every day in the U.K. are stillborn, which is around one in 225 babies. The U.K. ranks 24th out of 49 high-income countries for stillbirth rates, with the team now using the findings to stress that the situation in the U.K. should be improved. JB