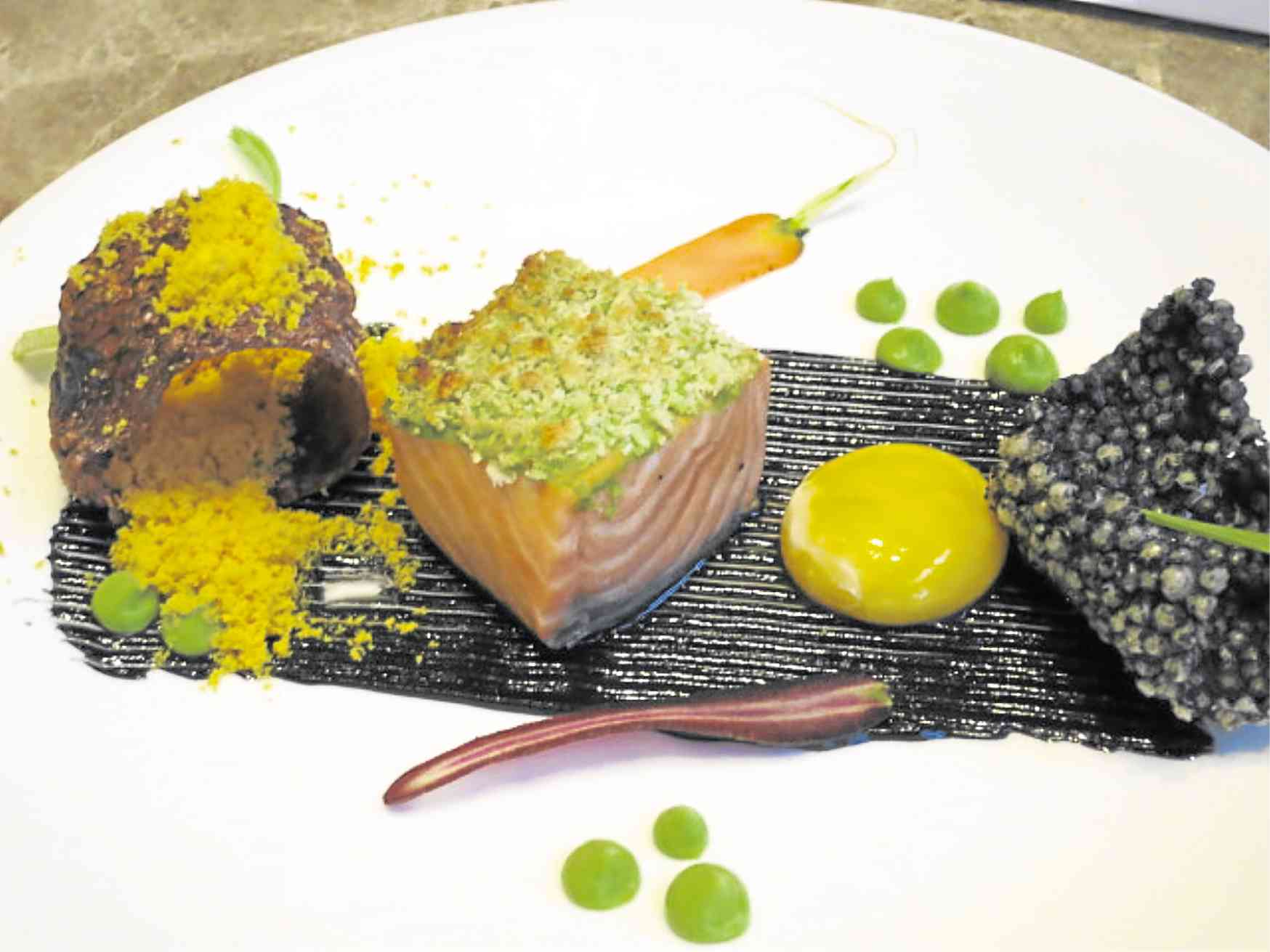 They moved like choreographed dancers with practiced steps. Except that their steps were slicing onions, peeling shrimps and chopping vegetables, and their stage was the open kitchen at Conrad Hotel’s Brasserie on 3 Restaurant.

Their audience? The executives and fellow chefs at Conrad Manila.

The event was a competition among Conrad chefs in connection with the India and Southeast Asia Culinary Challenge of F & B Masters. Having done so well in last year’s competition, Conrad Manila decided to join again this year.
With 16 chefs participating in this round, it was a full house that afternoon at the Brasserie.

All the contenders were required to create and prepare a three-course menu based on a black box full of ingredients. While all black boxes handed out to them had 10 compulsory ingredients, some contained surprise elements such as chicken liver, raw tuna and fish fillet, which must also be used. And they had to finish preparing all three courses in three hours.

“Most of the ingredients are local and sustainable seafood and the vegetables are all organic,” said executive sous chef Elmer Fabella. Days earlier, he had selected the participants from the hotel’s culinary staff and even mentored some of them.

Today he was like a task master, observing the participants’ techniques (if they were correct), their work stations (if they were hygienic) and the pace at which they were working (how fast or how slow). Every now and then he would announce the time remaining to the finish line.

Not surprisingly, some of them had the jitters, with a few spills here and there, while others maintained their cool, puréeing and peeling as if nobody was watching. All seemed inspired and were assiduous in getting the job done.

Indeed, when it was all over, general manager Harald Feurstein commended the contestants.
“Everybody did a great job,” he observed.
Director of operations Leo Holli praised them for their passion in honing their culinary skills.

Some of the dishes, such as the scallops tartar, the lamb with blueberry minted sauce, and the Malagos ganache with toasted sesame goat cheese mousse, may be added to the hotel’s à la carte menu.

After much deliberation, two were proclaimed the winners: Timothy Trinidad and Emmanuel Barrios.
Trinidad won for his appetizer of Kilawin sa Kamias at Itlog na Pula, which he said was a tribute to his father, who just passed away; and his main course, which he named Symphony of Flavors, salmon encrusted with cheese and bread crumbs, with sides of crispy salmon skin and activated charcoal tapioca crackers with a splash of black garlic aioli.

“My inspiration is my dad,” he said. “I have learned that no matter what happens or how bad it seems today, life goes on and it will be better tomorrow.”

“Adding the flavors of mango and basil to the piña colada gave (this tropical drink) extra kick,” he said. The peanut brittle added texture and crunch to the dessert. For him it wasn’t just a matter of thinking out of the (black) box, but also creating something new out of it.

Trinidad and Barrios will join the international competition of Conrad Hotel in February 2018.