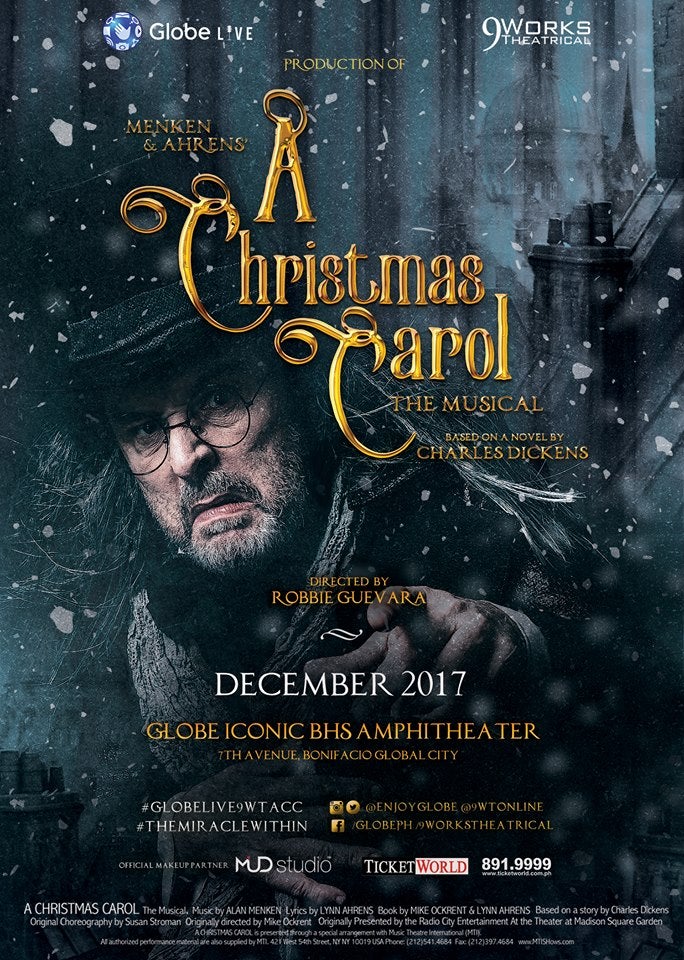 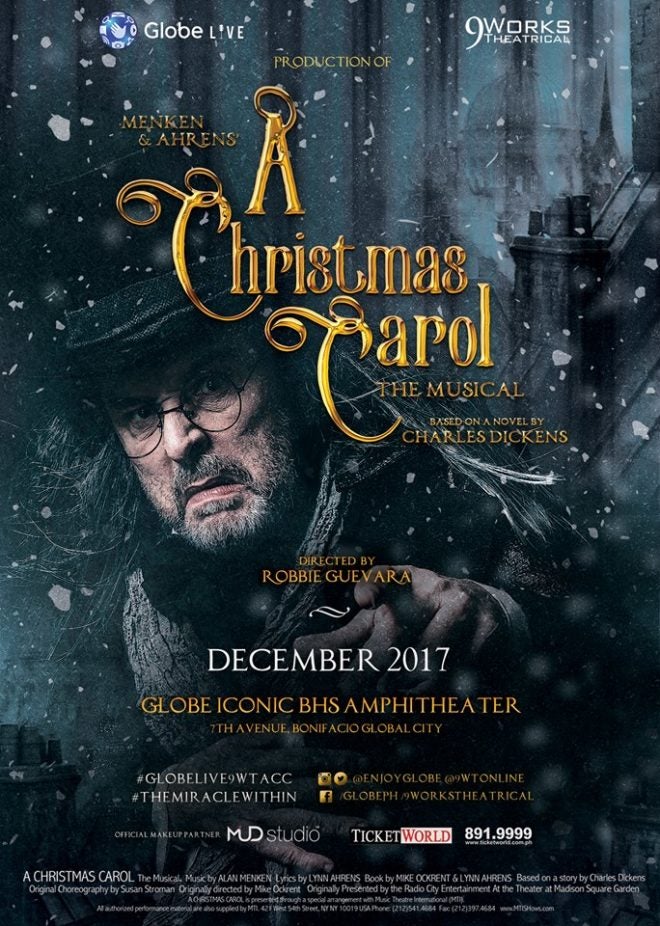 The classic Charles Dickens musical, with music by the legendary Alan Menken, will be restaged starting Dec. 7 at Globe Iconic Bonifacio High Street Amphitheater by 9 Works Theatrical and Globe Live. It is the same open-air venue where the show was mounted last year.

Coproducer Globe Telecom will be putting a Christmas tree by the entrance, where theatergoers can buy an ornament for P200 which will serve as their donation to the HERO Foundation.

HERO stands for Help Educate and Rear Orphans. It is a nongovernment organization that supports the education of children of fallen Filipino soldiers through scholarships and stipends for their school needs, says marketing officer Mauwi Villar.

Christmas, after all, is the season for giving, adds director Robbie Guevara.

“Creating a Christmas tradition has always been our intention in staging ‘A Christmas Carol,’” he explains. The creative team took inspiration from the play’s annual staging at Madison Square Garden in New York City, where city denizens come to watch the story of Scrooge as a community.

“A Christmas Carol” (book by Mike Ockrent and Tony Award winner Lynn Ahrens, also the lyricist) is the story of Ebenezer Scrooge, a very wealthy but bitter old man who gets haunted by three ghosts on Christmas Eve. Together they create “a miracle within,” reviving the mean old man’s heart with the true spirit of the season.

Veteran actor Miguel Faustmann will once again play Scrooge, a role he knows so well by now since he’s played it “a lot of times in Repertory Philippines.”

What keeps it exciting for Faustmann is working with the kid actors who are recast with every production. He likes playing with them during rehearsal breaks—especially, in this show, with Jaime Yupangco and Elai Estrella who are alternates as the poor but charming Tiny Tim.

“A Christmas Carol” also marks the theater comeback of actor Franco Laurel, who will play the Ghost of Christmas Past. Nico Dans and Rissey Reyes will be the Ghosts of Christmas Present and Future, respectively.

Noel Rayos, who marks “A Christmas Carol” as his 93th play, will have two roles: the jovial Mr. Fezziwig and Scrooge’s dead best friend, Jacob Marley.

“I’m making a killing being the BFF because, even after death, I come back and tell him that he will go to hell if he doesn’t change his ways!” Rayos says in jest.

The material and half the cast are the same as with last year’s staging, but the similarities end there, Guevara explains.

What’s new are the set design, this time by Ed Lacson Jr., as well as the lights and the choreography, which is crucial since 9 Works just staged Disney’s “Newsies, ”which featured spectacular dancing courtesy of choreographer PJ Rebullida. He’s back for more of the same in “A Christmas Carol.”

The show is still “serious, dark and gritty, but creativity is very high, willing and giving,” Guevara says.

“A Christmas Carol” opens Dec. 7 and will even run on Christmas Day, all the way until Dec. 27. So how does Guevara motivate the team to work on a holiday?

“I show my frustration using a four-letter word: love,” he says with a laugh. The director admits that he can be a Scrooge during rehearsals, because he pushes them to practice six hours a day, with only a 45-minute break—but it’s all for the good of the show, he says.

Globe’s creative marketing head Joe Caliro says that since “A Christmas Carol” will be shown in an outdoor venue, people without tickets are welcome to set up mats around the stage to watch it, music-festival style.

They are also encouraged to buy the Hope Foundation hanging ornaments for the “Christmas Carol” tree to keep the tradition of giving going.