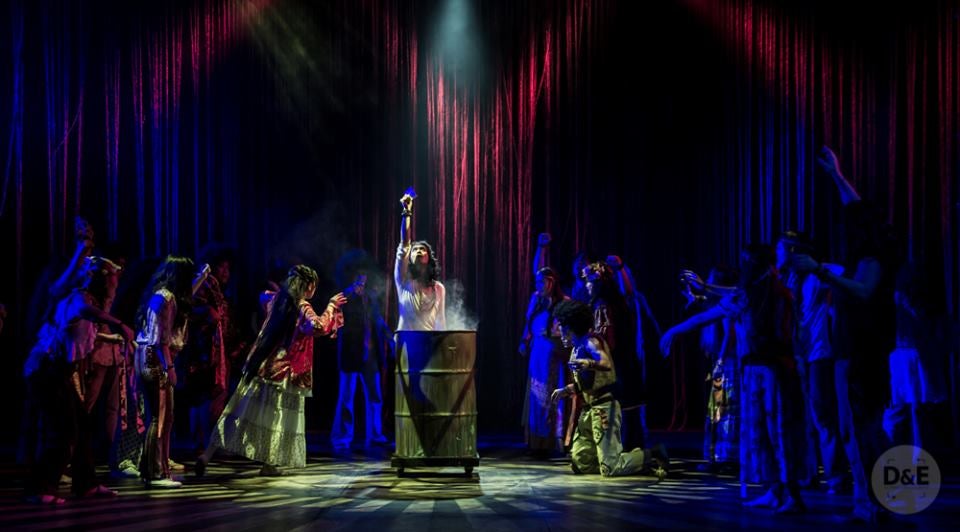 “Hair,” the 1968 rock musical written by James Rado and Gerome Ragni with music by Galt MacDermot, paved the way for other anti-establishment pieces such as “Rent” and “American Idiot” that would follow generations later. While it is tempting today to view its flower power and hippie evocations as remnants of the past and thus best viewed as nostalgic, the material remains a landmark work that broke the mold of the standard Broadway musical.

Also, while some of the causes its counterculture kids fought against in the late ’60s have been laid to rest, that youthful yearning for freedom and nonconformity that animates the core of the musical is as timeless as ever—meaning, the struggle continues, even now. That’s why “Hair” is a mixture of unrestrained jubilation and seething anger. Underneath all those calls to let the sunshine in is a dark anxiety. The spectacular rave party simply can’t last forever, and the hippie kids know that—hence, the play ending on an ambiguous, bittersweet note.

In Repertory Philippines’ production of “Hair,” running at OnStage Greenbelt until Dec. 17, Chris Millado’s direction pulls out all the stops to keep the energy upbeat, and he has a game ensemble for that.

The first act plays out like a nonstop concert, with each character introducing how he or she ended up in the commune via song. Nearly every back story, every act of defiance—and it’s a sprawling cast—finds explication in a musical number, in case the audience gets lost in this hazy, no-rules part of the woods.

Perhaps more than just a theatrical device of its time, this seemed to be how the play lured its original audiences into then bracing territory—a Broadway musical that exuberantly celebrated hippie culture, featuring nudity, drugs, free love and music as psychedelic as the pharmacological sensations freely savored by the denizens of this tribe.

But, while this approach perhaps worked 50 years ago, today it tends to stretch the scene into one long musical exposition—especially when a number of cast members appear to have established no authentic connection yet to the characters and stories they’re embodying. Defiance is relegated into an endless series of song-and-dance numbers—brashly performed, true, but lacking the edge by which we can believe these kids’ rejection of the status quo is something to care about.

Not everything seems to be going smoothly in this paradise, with the main character Claude (Markki Stroem, alternating with Topper Fabregas) vacillating between staying and burning his enlistment papers, or joining the establishment and fighting in the Vietnam War. A loose love triangle is hinted at between Claude, feisty leader Berger (George Schulze) and militant chick Sheila (Caisa Borromeo).

Schulze and Borromeo both provide strong presence, the kind that would persuade you their characters can take the fight out of their self-contained tribe and into the real world. But for all the raucous, open-hearted revelry that happens, the internal tensions and drama many of the other characters wrestle with don’t come forth as clearly.

Despite, for instance, an extended pot-induced nightmare meant to illustrate Claude’s dilemma, his motivations leading to his final decision feel inchoate, unearned. Only Stroem’s smartly blended characterization of vulnerability and irreverence makes his character compelling enough to watch throughout.

The overall result is a feel-good, trippy musical that occasionally pokes fun and hurls invective at the establishment, but the raw passion that should send every other revolution into a tumultuous emotional tide of highs and lows is strangely absent.

Without that hungry, crucial bite, this “Hair”—hardworking as it is—ends up no bigger than a quaint hop-and-skip down memory lane. —CONTRIBUTED