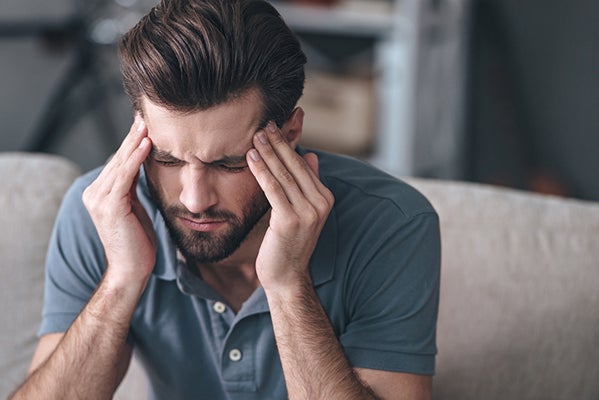 About two thirds of schizophrenia sufferers live with "voices" -- imaginary people who "speak" to them, typically to insult and threaten. It is a "horrible and distressing" condition, Craig said. g-stockstudio / Istock.com via AFP

“Can you go away, please?” the woman asks, timidly at first. But after some time, emboldened, she asserts: “I am not going to listen to you any more!”

The exchange is part of an innovative treatment developed by specialists in London and Manchester for people with schizophrenia who “hear voices”. And it seems to work, the team reported Friday.

Of 75 people who underwent “avatar therapy” in a three-month trial, seven “completely stopped hearing their voices,” according to the authors of a study published in The Lancet Psychiatry.

In the group overall there were “really large and signficant decreases in the amount of distress people felt in relation to their voices, the number of times a day they heard the voices, and the extent to which they felt overpowered by the voice,” said lead author Tom Craig of King’s College London.

In a comparison group of 75 patients who received counselling instead of avatar therapy, two said their hallucinations had stopped, the team found.

All the participants continued taking their medication throughout the trial.

About two thirds of schizophrenia sufferers live with “voices”—imaginary people who “speak” to them, typically to insult and threaten. It is a “horrible and distressing” condition, Craig said.

Most experience the voice as dominant, even omnipotent, and feel inferior and powerless in comparison.

For most, drugs reduce the symptoms but about one in four continue hearing voices, said the study.

The new treatment helps schizophrenia sufferers confront these disembodied scolds, and learn to dominate them.

All 150 participants had experienced persistent and distressing hallucinations for between one to 20 years, despite taking antipsychotic medication.

On average, they lived with three or four distinct voices each.

In the first step, a therapist would help the patient create a digital computer simulation, or avatar, of the main voice plaguing them—mimicking what it says, the pitch and tone of its speech, and recreating what they imagined its face would look like.

Over six 50-minute sessions, the patient then confronts their tormenter, materialised on screen, guided by their therapist.

The therapist, in a different room, uses a microphone to address the patient over the computer speakers, as well as voicing the avatar’s on-screen tirade.

In a video demonstrating the method, Craig counsels a woman as she talks to her avatar.

As she asks: “Can you go away, please?” Craig’s voice advises: “That’s good Lauren, that’s good, but can you try and make it a bit stronger for me? Sit up, look at him, and tell him to go away, OK?”

As the therapy advances and the patient learns to become more assertive, the avatar starts conceding ground, and eventually acknowledges the person’s strong qualities.

Schizophrenia affects more than 20 million people worldwide, according to the World Health Organization. Many are unable to work or maintain healthy relationships.

“The real advance that comes from avatar therapy is the improvement in treatment,” said Craig.

“I think it’s a real advance, and I think there will come a time when this will be part of routine provision of psychological treatments for voice-hearers in psychosis.”

Experts commenting on the study said it showed real promise but further trials are needed to confirm the efficacy of the treatment and determine which patients it may be used for.

If proven, “it will add an important new approach to care,” said Robin Murray of the King’s College London’s Institute of Psychiatry. KI