The Komikon report: Madly into the mainstream | Inquirer Lifestyle 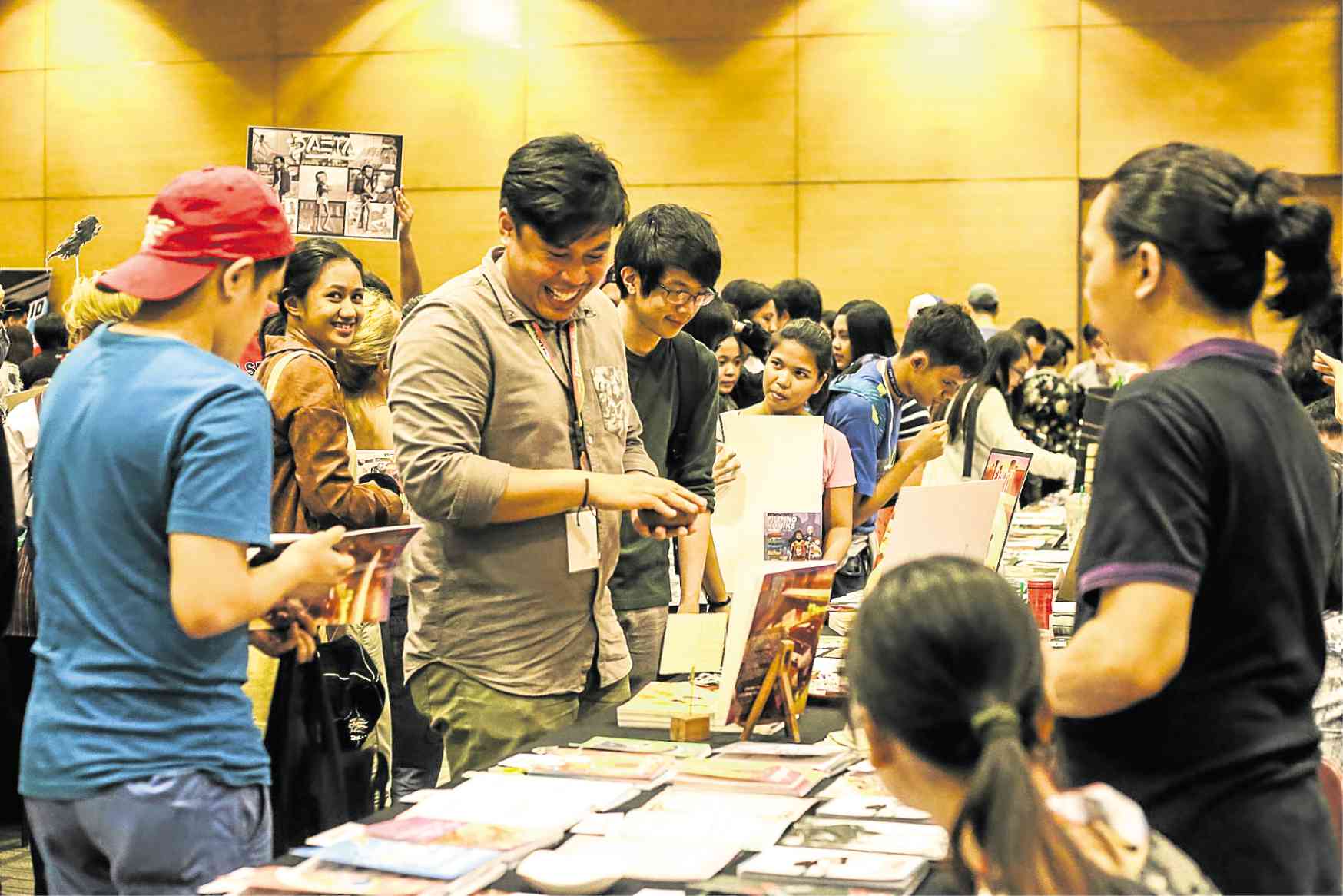 The enthusiastic crowd at this year’s Komikon –PHOTOS BY JAM STA. ROSA

The Komikon report: Madly into the mainstream

Like the dynamic opening spread of a comic book, the riot of pages, merchandise and people greets you upon stepping into the Bayanihan Center for the 2017 Komikon last  Nov. 11 and 12.

The first thing you see is the expansive ABS-CBN booth, dominated by a display celebrating over 100 years of komiks genius Mars Ravelo. There are T-shirts, mugs and keychains, but the big draw is the three amazingly detailed statues from Halimaw! Sculptures of the three iconic Ravelo heroes: Lastikman, Captain Barbell and Darna.

To the right, in one of the conference rooms, is a similarly expansive booth promoting and selling merchandise for “Tabi Po,” the award-winning, mind-blowing, aswang-centic comic book series from creator Mervin Malonzo which is now a buzz-worthy TV series from Cignal TV’s Sari Sari channel. It wasn’t too long ago that “Tabi Po”—now on its third volume from Visprint—made its first appearance here at Komikon.

The presence of these attractions is emblematic of the size and sizzle of Komikon, now on its 13th iteration as the most important komiks convention in the country. The redesigned floor plan boasted a wide array of T-shirts, pins and artists’ commissions—but the big treasure here are the new komiks titles, the fresh batch of graphic goodness that fans have come from far away to grab.

On the far end, the Visprint booth remains one of Komikon’s staples. The crew from “The Dark Colony Clasificado: The Grinning Niño of Barang” were there led by Bow Guerrero. Much missed is writer Budjette Tan, who is now based in Billund, Denmark, working for LEGO. “Zsazsa Zaturnnah” creator Carlo Vergara signed for fans as well.

Visprint had two new offerings this Komikon. One is the third issue of the full-color, Filipino line of comic book singles from the beloved “Trese” series, “Trese: Ang Trahedya ni Dr. Burgos,” from the aforementioned Tan, artist Kajo Baldisimo and translated by Bob Ong.

A yearly tradition is the release of a new Kikomachine volume from Manix Abrera. This year it is “Kikomachine Komix! Blg. XIII: Aklat Sikreto ng mga Lihim na Karunungan,” the latest compilation of his Inquirer strips. Also a yearly tradition is the long line—perennially the event’s longest—of readers lining up to get their books signed by Abrera, an occurrence that begins with the opening of the doors on the first day and continues until the doors close on the second. Abrera admitted that this year, for the first time, he took an hour off to eat lunch.

A fascinating offering from Summit Books is the graphic novel “Doorkeeper,” from writers Ethan Chua and Scott Lee Chua. The book is illustrated by Gia Dominique Duran, Aaron Felizmenio, Allen Geneta, Bow Guerrero, Bianca Lesaca, Jap Mikel and Brent Sabas; it has an introduction by the somehow ever-present Budjette Tan. “Doorkeeper” is a never-dying, powerful supernatural being who pops up in different periods in Filipino history, represented by the book’s six chapters.

The most interesting is the chapter that is essentially a high-concept sci-fi reimagining of Francisco Balagtas’ “Florante at Laura.” “Doorkeeper” emerged from a conversation Scott and Ethan had about the butterfly effect. “The Doorkeeper was our fantastical solution,” Scott says. “He would be the Keeper of the Ways, the Steward of Choice, who appears to people on the brink of making such pivotal decisions and shows them the consequences.”

The project took over a year to finish, and the writers actually turned to crowdfunding to “run the last mile,” after putting in their own money, Scott says. “We were amazingly lucky, and I’m still a little bit in shock thinking back to how that worked,” Ethan said of working with Summit Books to release “Doorkeeper.”

“Doorkeeper” is available from newsstands and bookstores.

“Sandali” is a collection of everyday (but not so ordinary) vignettes from Mikey Jimenez and Mikey Marchan, published by Adarna House’s Anino Comics imprint. There’s a “Black Mirror” feel to the stories but with less tech and more Pinoy irony (the best is “Cosplaya’ Hata,’” check it out).  The two Mikeys had worked on 20-page one-shots before.

“We might go back to making 20+ pager one-shots again down the line, but at the time, the anthology format just felt right for us. With vignettes, we get to make multiple stories with different characters and scenarios, which was challenging yet enjoyable as well,” Jimenez said. “Sandali” also took over a year to complete. Jimenez notes, “Having the support of Anino Comics was a new experience for us. We’ve been through the whole Komikon ‘gauntlet,’ from selling at the ‘Indie Tiangge’ section to paying for a spot at the main floor, so having our work displayed on Anino’s table was definitely something different.”

“I used to commute from and to Biñan and Padre Faura almost every day,” Daluz remembers. “The daily commute is such a hassle and I would always think of this concept of a hardcore commuter who would probably handle the experience better than me and everyone else. I wanted to document my experience through this character and at the same time shed a light on some of the problems in our public transportation.”

As the title states, there’s thankfully more “Hari ng Komyut” in our future: “Yes! ‘Ang Hari ng Komyut’ is an ongoing webcomic. I do my best to release a comic every week, and this time I’ll be bringing in more characters that ‘Hari ng Komyut’ will meet and introduce more challenges that he’ll be facing in his last year in college.” Check out the Anino books at facebook.com/aninocomics.

Our favorite new offering at Komikon is the biggest one—literally. “Bakokak” is the new graphic novel from “Elmer” creator Gerry Alanguilan—one of the true Komikon titans—and artist Kevin Ray Valentino, from Alanguilan’s Komikero Publishing. It’s the biggest because the book centers on a giant frog monster that has come to attack Metro Manila. As others have pointed out, it’s a kaiju movie in komiks form, Godzilla as Pinoy. It’s all kinds of amazing. “I’ve always been fascinated with giant monsters ever since I saw ‘Supergirl,’ a local film from 1973 which featured a rip-off of the DC comic book character featuring Pinky Montilla in the lead role,” Alanguilan explains. “I was a kid back then and the giant frog that rampaged through a local village frightened me as well as blew my mind. That memory was triggered when many years later Carlo Vergara showed me pages of the then unreleased ‘Zsazsa Zaturnnah’ and it featured a giant frog. It was so awesome. It planted the seeds in my mind of wanting to do my own giant frog story one day. It wasn’t until I met Kevin Ray Valentino, a young artist based in San Pablo City, did I suddenly realize I had the perfect artist for that story.”

The two had begun collaborating on “Bakokak” as far back as 2014 and worked continually over three years. The results reflect this as can be seen in the detailed art of the Filipino military trying to halt the inexorable advance of the giant frog.

“Bakokak” is both a call back to the classic elements of the kaiju phenomenon as well as a very lushly illuminated Filipino take on the genre. You can buy “Bakokak” at Comic Odyssey or through komikero.com.

Alanguilan exemplifies the joy of debuting a title at Komikon when he says: “It was so amazing. I’m particularly proud and happy for Kevin because I feel it’s pretty much his project as much as mine. We’re loving the positive feedback it has so far gotten.”

With the impressively polished and creative work on display as well as the huge crowd of visitors, Komikon is both a passionate display of Filipino creativity through the medium of komiks, but also a sign of comic books’ wildly fanatic following among Filipinos. It was powerful witnessing Komikon step madly into the mainstream.

The greatest emotion bursts from the proud creators of Komikon; as Scott Lee Chua says, “It was great to finally see the process of transforming an idea into a three-dimensional object to its end! Seeing Komikon-goers’ eyes light up flipping through our comic was rewarding beyond words.”