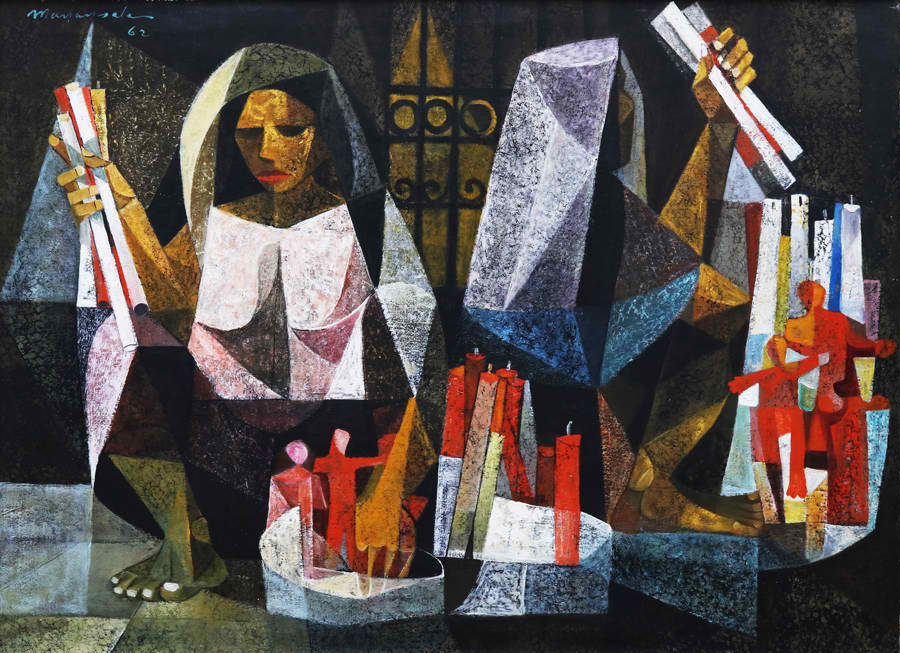 León Gallery will bid out the largest painting by National Artist Vicente Manansala ever to be offered for auction in recent years during its annual “Kingly Treasures Auction” on Dec. 2.

Auction house owner Jaime Ponce de León said the work had been “acquired directly from the artist” by a “distinguished family.”

“Even within the confines of a picture frame, Manansala’s strengths as a muralist are evident in ‘Market Scene,’” noted the official catalog, “and the power of this painting comes from the highly detailed presentation of numerous figures in a row, seven members of a rural family, horizontally filling up the pictorial field.”

Ponce de León said “Candle Vendors” came from the William Gargiulo Collection from the United States. (Gargiulo was an American expatriate who worked in the pharmaceutical industry in Manila in the 1960s.)

“‘Candle Vendors’ is a fine representation of Manansala’s early cubist phase while [‘Market Vendors’] is an exceedingly superb work from his mature phase that gained Manansala his reputation for transparent cubism,” said Ponce de León. “Both are at the apex of both significant periods.”

Another highlight of the year-end auction will be two works by Manansala’s mentor, National Artist Carlos “Botong” Francisco.

According to Ponce de León, the  “two remarkable oil works” were made during two significant periods of Botong’s career, one from the late 1930s-1940s and the other from 1963.

The first, “Wawa sa Angono,” shows Botong’s penchant for depicting the beauty of everyday life in his beloved hometown along the famous Laguna de Bay in Rizal province.

The second, “Bugan and Aliguyon,” brings to life one of the most romantic moments in Ifugao epic poetry—the noble warrior Aliguyon carrying his bride-to-be, Princess Bugan, across a mystic stream for them to swear undying love in front of a sacred tree.

Both paintings have a starting price of P8 million.

“It is rare, indeed, to find a high-quality easel-size Botong to be made available in a single sale; rarer still to find two exceptional examplars,” Ponce de León said.

“It is inarguably the gold standard for the artist’s output among collectors,” said Ponce de León.

“‘Acinipo,’ from the Latin phrase ‘among the vineyards,’ captures the rugged beauty of the Roman ruins in the south of Spain,” Ponce de León said. “The work is the epitome of recognition that takes just one look.”

Another highlight is H.R. Ocampo’s 1969 oil-on-canvas “Bon Vivant” from the Cultural Center of the Philippines’ “Genesis” series. The colors of the series distinguish this period, the most sought after of Ocampo’s works.

Starting bid is at P7 million.

Romulo Olazo, a student of Manansala at the University of Santo Tomas, is represented by the 1983 oil abstract “Diaphanous 409,” which has a starting bid of P1.6 million.

Juvenal Sansó’s 1971 acrylic-on-canvas “Hues of the Morning” features a bedrock covered with green organic formations under the orange sky. It has a starting price of P1.4 million.