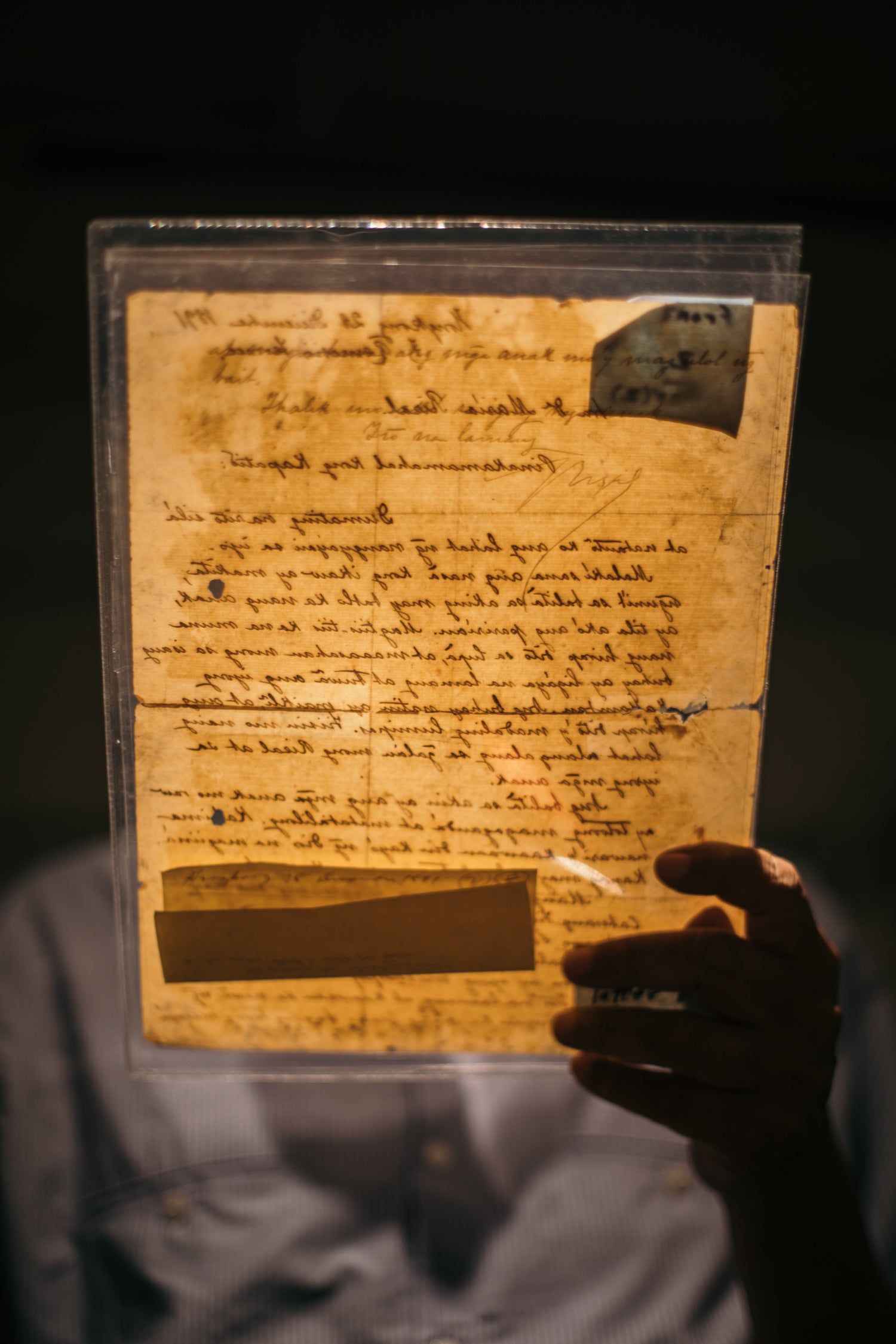 Written by Rizal during his Dapitan exile, this letter is expected to invite fierce bidding. —JILSON SECKLER TIU

Four personal letters in Filipino by José P. Rizal to his older sister Maria Mercado Cruz written mainly during his Dapitan exile will be up for historic bidding during León Gallery’s “Kingly Treasures Auction” on Dec. 2.

Complementing the sale will be the auction of Félix Resurrección Hidalgo’s portrait of Nelly Boustead, “one of the greatest loves of Rizal,” according to León owner Jaime Ponce de León.

“It is León Gallery’s privilege and honor to handle the historic sale of four personal letters signed and dated by no less than our beloved National Hero, Dr. José P. Rizal.,” said Ponce de León. “This will be such a remarkable moment as it is the first time in living memory that a letter by the greatest—and first—Filipino will be sold in a public auction.”

“Although León Gallery can claim many firsts in the auction world, this time (it) is offering a fantastic coup de maître, a masterstroke,” Harper said.

Art history writer Lisa Guerrero Nakpil said the letters show Rizal’s “very neat and beautiful penmanship” and “iconic signature.” “He was writing in Tagalog so it was as live and personal as you can get,” she noted.

Each of the letters is called in the auction catalog as “one extremely rare and historically important letter.” For each missive, bidding starts at P1 million.

The second is equally poignant as it was written in 1895, during Rizal’s exile in Dapitan in Mindanao: “Si Miss B (na) nagpapakumusta sa inyo (Miss Bracken sends her regards),” obviously referring to Rizal’s partner, the Irish Josephine Bracken.

The third letter, also written during the Dapitan exile, has Rizal flashing his temper and telling his sister to reject a demanding patient who was apparently no fan of his medical work: “…baka akala nila totoo akong nangangailangan ng tulong (They may think I am truly in need of help).”

The fourth and last letter was apparently written toward the end of his banishment in which he expressed joy at his favorite nephew Morris, Maria’s son, coming over: “Dumating dito si Morris kahapon… at ang wika’y may dala siyang medias kay Miss Bracken (Moris arrived yesterday… saying that he had brought stockings for Miss Bracken).”  Rizal likewise advises his sister to remind Morris to use English in practical conversation so as not to forget it.

Provenance of the letters is unassailable. They came from the “Heirs of Maria Cruz.”

The National Centennial Commission in 1961 formed to come up with programs to mark Rizal’s birth centenary compiled nearly a thousand letters into five volumes, and there were a hundred letters to his family alone. But the four letters in the auction  are notable since they indicate that Rizal’s favorite sister was really Maria Mercado Cruz.

In the Hong Kong letter,  Rizal addresses Cruz as “Pinakamahal kong kapatid (my most beloved sister).”

“This is significant in comparison to his letters to his other sisters as merely ‘Dear Saturnina’ or ‘Dear Josefina (Pancoy),” noted Harper. “Is Maria the favorite sister?”

Before Bracken, there was Nelly Boustead.

Up for auction also is the portrait of Boustead by Rizal’s friend, Félix Resurección Hidalgo (1855-1913) .

An oil-on-canvas measuring 24” x 20” (61 cm x 51 cm), the painting  is signed and dated 1889, and comes from the Richard Boustead Joaquin and Ma. Teresa Rovira private collection of Girona, Spain.

Boustead is now considered “Lady No. 8” among  the nine  loves of Rizal.

She was just 19 years old when Rizal, already 30, met her in Paris. She was a Filipino of mixed blood; her father was Filipino-Anglo-French Edward Boustead who owned a villa in Biarritz.

Rizal was eager to settle down and so proposed marriage but she demanded that he converted to Protestantism. He refused.

“It is a sheer stroke of serendipity that the exquisite portrait of one of the greatest loves of José Rizal, the heiress Nelly Boustead, painted by Hidalgo, is part of this momentous sale,” Ponce de León said.

“It was while visiting Nelly at her villa in Biarritz that Rizal finished the last chapter of his momentous second novel, ‘El Filibusterismo.’”

It was Boustead over whom Rizal and the fiery and temperamental Antonio Luna nearly duelled. “Heneral Luna” withdrew, thus averting bloodshed.

Bidding for the Hidalgo portrait starts at P5 million.

Nakpil said the letters would paint Rizal as “quite a guy.”

“Three of the letters were written while in exile in Dapitan—and when you think of Dapitan as it was then, Dapitan was the back of beyond,” she explained. “Very remote, very far from civilization.”

“Instead, Rizal fell in love and opened a school for young boys in Dapitan. He also continued to practice medicine and patients would come from all over the world. That’s how he met Josephine Bracken.”

Rizal’s figure looms large in the collective imagination of the Philippines, but the letters should show he was like any human, whose humanity would make his rife for heroism, said Nakpil:

“By making Rizal immediate and intimate, perhaps—yes, just maybe—we will stop thinking that it is not so impossible to be patriotic and that we can be more like him and stop thinking of ourselves.”