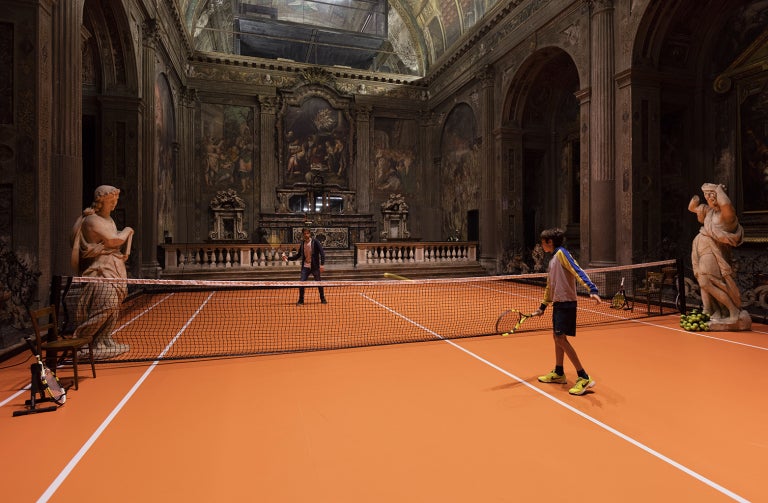 American artist Asad Raza is behind the ongoing Milan exhibition “Untitled (plot for dialogue)” which brings a tennis-like game — complete with special flooring, netting, racquets and coaches — into a 16th-century church setting.

The visually striking show aims to repurpose the church, typically seen as a place to receive messages from above, into one of two-way exchange and recreation, according to Converso, the art venue hosting the event.

Visitors to the show take to the court, where they practice with coaches — all young local tennis players, recruited by the artist through a series of auditions — in a meditative back-and-forth activity.

Iced jasmine tea, made daily on site and served in an urn on the church altar, is on hand to quench visitors’ thirst. A scent called Dialogo has also been created specially for the event by the artist’s sister, a perfumer; it features notes of lilies and mushrooms and is set to be “floral yet untraditional.”

“I thought the scent should be as uncanny as my brother’s functioning tennis court in a 16th century Catholic Church is,” said the perfumer.

Raza, whose work has recently been shown at Shanghai’s Rockbund Museum and the Whitney Biennial, is an avid tennis player himself; having written extensively on the game, he sees it as “a method of absorbing energetic drives into symbolic but non-harmful practices,” according to Converso.