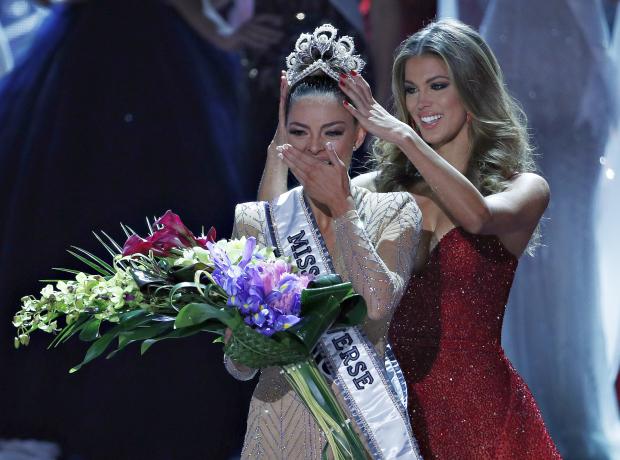 The Top 10 finish of the Philippines’ Rachel Peters sustained the country’s semifinal streak in the global pageant, which started in 2010.

Nel-Peters, 22, who recently earned a business management degree, was crowned at Planet Hollywood Resort and Casino on the Las Vegas Strip.

Ninety-two women from around the world participated in the decades-old competition. This year’s edition had the biggest number of contestants ever, including the first representatives in its history of Cambodia, Laos and Nepal.

Along with the title, Nel-Peters earned a yearlong salary, a luxury apartment in New York City for the duration of her reign and more prizes.

She is the second woman from her home country to earn the crown.

Fans of the pageant submitted the questions that the final five contestants were asked during the competition.

Asked to name the most important issue women face in the workplace, Nel-Peters answered lack of equal pay.

“In some places, women get paid 75 percent of what men earn for doing the same job, working the same hours, and I do not believe that is right,” she said. “I think we should have equal work for equal pay for women all over the world.”

Nel-Peters is from the South African coastal community of Sedgefield in the Western Cape province.

She helped develop a program to train women in self-defense in various situations after she was robbed at gunpoint a month after she was crowned as Miss South Africa.

Steve Harvey returned as the show’s host despite botching the 2015 Miss Universe crowning.

This year’s judges included Lele Pons, a YouTube star; Jay Manuel, a former judge of “America’s Next Top Model”; and Wendy Fitzwilliam, the 1998 Miss Universe winner from Trinidad and Tobago.

In the Philippine province of Camarines Sur, members of the Obregon family, who are related to Peters through her mother, watched the live telecast of the pageant to cheer for her.

On Calle Putol, the house of Peters’ maternal grandparents—Leonor and Fausto Obregon—was filled with relatives and neighbors who were rooting for their candidate.

Their excitement grew when the pageant host named the final four qualifiers in the Top 16 through a wild card. She made it to the Top 10 but failed to qualify in the Top 5.

Her relatives in Naga City were just as proud.

“She tried her best and she remains to be the Miss Universe in our family,” Peters’ aunt, Gloria Obregon Villagarcia, said after Miss Colombia was called in for the last slot in the Top 5.

This year’s pageant adopted a different system in selecting the semifinalists. The delegates were split into geographical regions—The Americas (North, Central and South) plus the Caribbean, Africa and Asia-Pacific, and Europe.

Each region had four representatives chosen based on the preliminary interviews, and the swimsuit and gown competitions.

Peters was not among the four qualifiers from the region of Africa and Asia-Pacific.

She failed to advance further after the evening gown competition of the Top 10. But her accomplishment sustained the Philippines’ semifinal streak in the competition.

Since 2010, the country’s representatives had been called during the first cut.

In a statement, Stella Marquez-Araneta, chair of Binibining Pilipinas Charities Inc., congratulated Peters “for her phenomenal representation of the country in this year’s Miss Universe pageant.”

“More than your poise and beauty, you are a cut above the rest with your grace and elegance that exemplify a true woman of substance and an inspiring Filipina. We are proud to be a part of your journey,” Araneta said.

In Davao City, presidential spokesperson Harry Roque said he was “happy” for Peters for making it to the semifinals. —REPORTS FROM AP, ARMIN P. ADINA IN MANILA, JUAN ESCANDOR JR. IN NAGA CITY, AND FRINSTON LIM IN DAVAO CITY