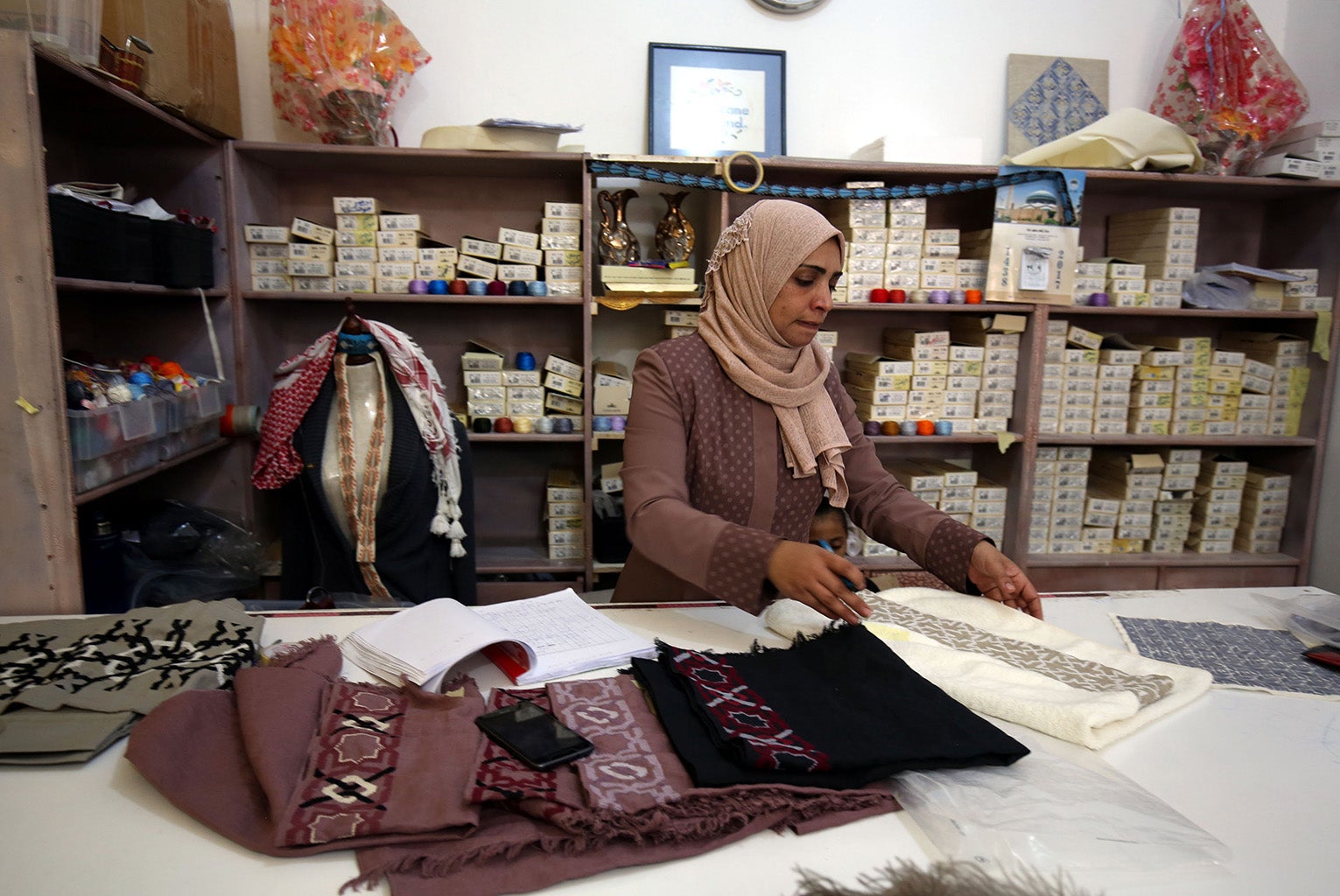 In a small workshop in a Palestinian refugee camp in Jordan, Halima al-Ankassuri embroiders traditional patterns onto a blue shawl, destined for sale in an upmarket Paris, London or Dubai boutique.

The 54-year-old mother of seven describes her work as “modern products with shimmering colours, embroidered with Palestinian and Islamic motifs”.

“I’m proud to see Europeans wearing what we produce here and to see top fashion magazines take an interest,” she said referring to the German online edition of Vogue, a large smile on her face, girded with a red veil.

The Jerash camp where she lives, in northern Jordan, was established to host more than 11,000 Palestinians who fled the Gaza Strip during the 1967 Arab-Israeli war — hence its alternative name, Gaza Camp.

Half a century on, more than 29,000 refugees live in the camp amid poverty, unemployment and crumbling infrastructure.

In 2013, Roberta Ventura, an Italian with a background in investment banking, decided to set up a social project to help women in the camp after visiting it and seeing their intricate skills close up.

SEP Jordan (SEP for social enterprise project) aims to “change lives not only of dozens but over time, hundreds, perhaps thousands of women”, she wrote in a message to AFP.

On the workshop’s tables lay traditional keffiyeh chequered headscarves with inscriptions of different colours, along with cashmere shawls and handbags.

“The project started with 10 women and now they are 300,” said the programme’s director, Nawal Aradah. “We make products on request: shawls, handbags, towels, sheets and all kinds of household decor.”

They are also sold inside the Palestinian territories — in the Israeli-occupied West Bank city of Bethlehem, said the project’s regional manager, Mahmoud al-Haj.

For women in the workshop, embroidery is an important source of income.

“We all suffer from poverty in this camp,” Ankassuri said. “This work helps us to improve our lives, even if we charge for our products individually at low prices, from 15 to 20 dinars.”

Every product she embroiders requires at least a week’s work.

She says she has pain in her hands, but enjoys being around other women in the workshop.

Ventura said the women’s “unique talent” is “appreciated around the world”.

More than two million Palestinian refugees are registered with the United Nations in Jordan, but about half of the country’s 6.6 million population is of Palestinian origin.

Ankassuri and her colleagues learned the art of embroidery from their mothers and grandmothers. Each region of historic Palestine has its own motifs and patterns.

As well as presenting Palestinian history and culture to a new audience, their craftwork “helps promote the cause of our people”, Aradah said proudly.

A flag and a map hang on the walls of the workshop, reminding the women of their link with the land of their birth or, for the younger ones, that of their ancestors.

“Every woman here has a story,” Aradah said.

“This work helps them to send their children to school, change the furniture in their homes and improve their living conditions, especially since many husbands do not work.”

Hiba al-Hudari, who was weaving a blue purse with Islamic inscriptions, said the workshop had become “a second home”.

The 37-year-old mother of six said she earns about 150 dinars a month. “With that, I help my husband, who’s a mechanic, provide for our household,” she said. MKH