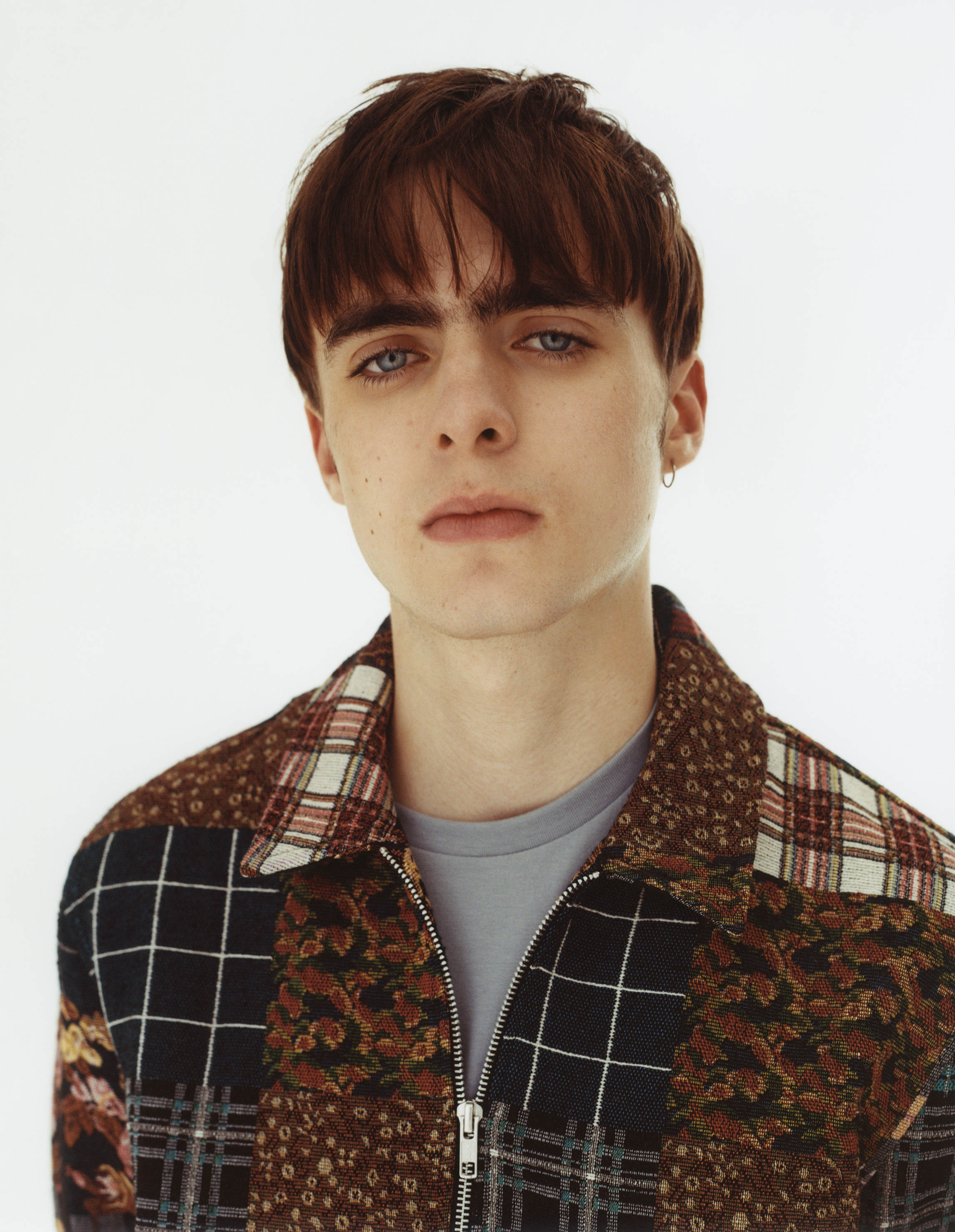 Son of Oasis frontman Liam Gallagher and actress/singer Patsy Kensit, Lennon Gallagher has that rockstar look and swagger—and the clothes to match. “When I’m at my dad’s I break into his wardrobe.”

Lennon Gallagher, son of ex-Oasis frontman Liam Gallagher, is named after his dad’s idol, the legendary cofounder of the Beatles.

Besides inheriting his dad’s signature fuzzy eyebrows, Lennon exudes rock star angst and edginess. The 17-year-old first broke into the internet when he wore, for a magazine shoot, a Blur (the rival band of Oasis) T-shirt.

Instead of going down the usual route of picking up a guitar and becoming a rock ‘n’ roll star, Lennon chose to pursue his own path as a model.

As the face of Topman’s new campaign, menswear’s next big thing sits down and talks about style, Nirvana and memes, among other things.

Why not both? I mean, I do love a leather jacket. But on a Monday morning, when I go to college, it has to be tracksuits.

Nirvana, man! I went through a massive grunge phase. They are definitely my No. 1, as well as Kurt Cobain’s early stuff like Fecal Matter. They’ve got some sick music.

What new music are you listening to?

Rat Boy. He’s sick. I went to a few of his gigs up in Leeds a year and a half ago, but he got big only quite recently. My younger brother, Gene, is obsessed with him. He’s incredibly creative, he makes his own clothes and stickers. It’s awesome.

What football team do you support?

I’m not too big on football, but if I had to say a team, it would have to be Man City or my dad would freak out.

The one I find really hilarious at the minute is how Italians hold stuff, it’s so stupid. Me and my older brother have jokes regarding memes. I just tag him in stuff on Facebook and he’s like, “What was that?” Have you heard they’ve made memes into a university course now? Like, what’s your degree in? Memeology.

Could you see yourself getting into that?

If modeling fails and I don’t get into acting, I’ll just go to university and talk about memes.

Your dad must have a pretty impressive wardrobe. Do you ever steal his clothes?

All the time! When I’m at my dad’s, I have to break into his wardrobe, it’s like “Mission: Impossible.” Me and my younger brother will go try and check them out and he’ll be like, “Don’t get into my wardrobe!” He’s got some really cool Adidas sneakers. My mum (the actress and singer Patsy Kensit) has really cool clothes, too, and I have to admit I have nicked some of them before, alongside my older brother’s, too.

I don’t think I know any! I transition through so many different styles, but at the minute, I’ve been wearing a lot of skater clothes

So, are you attending a lot of drops?

I’ve never been to a Supreme or Palace drop. I’ve got some friends who have camped outside the stores and stuff. What got me into skating was my mum, she showed me this documentary called “All This Mayhem,” about skateboarding brothers Tas and Ben Pappas. It was pretty interesting. They dealt with drugs and stuff like that, it was so captivating.

Were you nervous walking your first show for Topman Design? Do you have any preshow rituals?

I didn’t have enough time to get stressed. I went to the casting the day before and they said to come the next morning at 11 a.m. I was like… oh… OK. I have to come up with an excuse for school now! I don’t have any rituals, though, apart from drinking a ton of coffee.

Have you been given any advice on dealing with this new limelight you’re in?

Not really. But Models One, the agency I’m with, offers a social media class to learn how to deal with that, which I want to do eventually. It’s weird, I’m not sure how to deal with it. Mum and Dad have kept me out of the spotlight for a lot of my younger life. But yeah, I need to go talk to my agency before I say something weird on Instagram.

In the Philippines, Topman is owned and operated by Robinsons Specialty Stores Inc., a subsidiary of Robinsons Retail Holdings Inc.