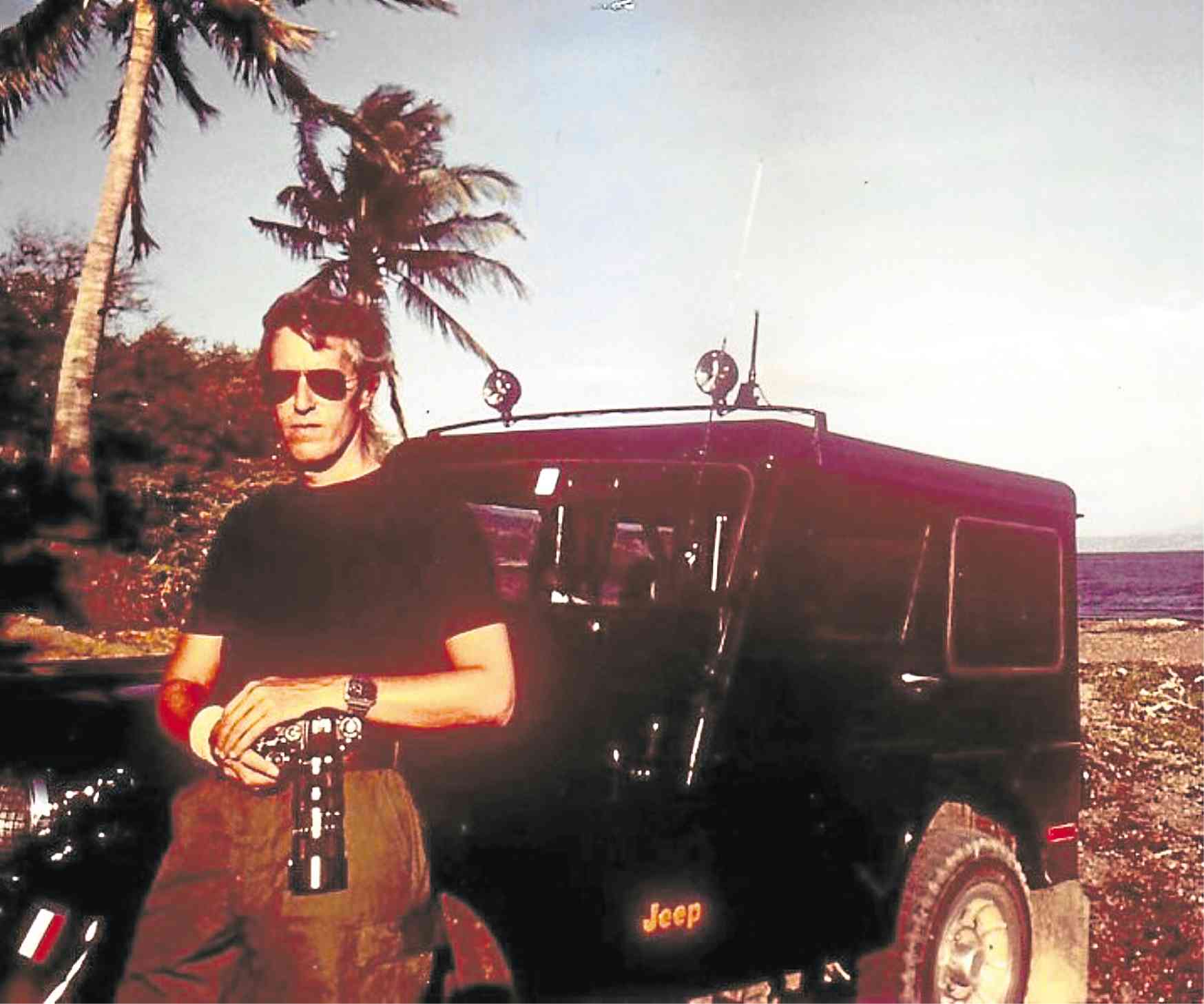 Patrick and his Jeep “Godzilla”

These are excerpts from an essay in the book “My BenCab,” soon to be published by Anvil Publishing. It’s the closest one could get to the esteemed photographer, renaissance man, and fine gentleman who chose to make the Philippines his home. He passed away last Nov. 21, in Metro Manila. He left behind a former wife, Eva Abesamis, and son David, and countless friends and colleagues.

Patrick de Koenigswarter, who holds dual citizenships (British and French), born in London to an English mother and a French father, is a baron from his father’s line, declared such by Napoleon III. He first visited the Philippines in 1969—and has never left.

He recalls, “After graduating from Columbia University Graduate Business School, in New York City, a group of my Latin American fellow students and I, having decided that Latin America was the land of the future (I had grown up in Mexico where my father was stationed as a French diplomat and I spoke fluent Spanish), all applied for jobs there with US companies, hoping eventually to start our own business somewhere in Latin America.

“After three years working for the New York office of an international mining and trading company based in Latin America, I changed my mind and decided to work instead in Europe where the same company offered me a job in its Madrid office.” Thus began young Patrick’s career in business, a career that eventually took him to the far corners of the earth…

Four years later, toddler Patrick was on the move again, with his mother and siblings fleeing—in extremis—from the German “blitzkrieg” invasion of France, to his maternal family home in England via one of the last ships to escape France bound for Scotland. From there soon after the Germans began bombing England, his mother brought the children to the US, which was deemed safer than Europe.

In America they were left, in 1940, with the Guggenheim family (the nephew of Solomon Guggenheim of art collections and 5th Avenue museum fame) who “adopted” them for the duration of World War II, while Patrick’s mother hied off to Africa to reunite with his father in Gen. Charles De Gaulle’s Free French armed forces which had joined the Allies in the fight to liberate Europe from the Nazi invaders.

While his parents lived extremely dangerously, participating in the Allied advances (his father a French marine brigade combat commander, his mother a broadcaster, journalist and military ambulance driver) across North Africa, Sicily, Italy, France, and finally, Germany, Patrick enjoyed a happy and  peaceful “wartime life in the lap of luxury” with the Guggenheims, in Manhattan, on their Long Island estate, a reconstructed French castle perched on a cliff overlooking Long Island Sound, and their hunting lodges in Georgia and South Carolina, mixing with the Guggenheim couple’s many friends among the American cultural and political elites…

His parents eventually divorced and his mother, Pannonica Rothschild (of the British Rothschild family), settled down in New York where she eventually became a celebrated patron of jazz, from the mid-’50s until her death in the late ’80s. She was known far and wide as “The Jazz Baroness,” to whom (at last count) over 30 compositions were dedicated by many of the greatest jazz musicians of the era, in recognition of her friendship, encouragement, assistance and championing what in those days, prior to Civil Rights, was an immensely creative, talented but looked down upon and discriminated against group of musicians (mostly of African American origin) who produced what can be rightfully described as America’s primary original contribution to world culture: jazz.

“After having lived and worked in Spain for three years, I had just moved into a very attractive modern flat in Madrid in mid-1969 and was enjoying furnishing it when I received a letter from the company’s head office asking whether I would consider traveling to the Philippines for a couple of weeks to investigate and report on the advisability of the group opening an office in Manila, as had been suggested by the manager of our Tokyo office.

“This, for me, was an invitation that I simply could not contemplate refusing, having been for years fascinated by everything Asian, fueled early on by the writings of Joseph Conrad, Somerset Maugham, George Orwell, not to mention a host of more contemporary French, English, American and Asian authors and bolstered by every college course I could squeeze in on Asian history, geography and cultures, a fascination greatly enhanced by a couple of weeks spent traveling around the Far East during the summer of my senior year in college in the US.

My father, then recently having taken up his post as French ambassador to Indonesia, suggested that it was time for me to take the traditional ‘grand tour’ customary in the old days in Europe when a boy reached maturity…

“Somehow the Philippines was not in my schedule then, so I was happy to have the opportunity of visiting a dozen years later, notwithstanding the collection of ‘horror stories’ about the archipelago that I received from some of the people who heard of my impending trip to Manila (at least from those who professed to know something about the place, whereas others simply commented on how lucky I was to be ‘off to the  Caribbean!’)…

“Needless to say, I fell in love with the country and its people from the word go…

“One of my first business meetings in Manila was in the Ortigas area. While heading there northwards along Edsa, I happened to notice the Luz Gallery sign on the opposite side of the highway, and since I was somewhat early for my appointment, told the driver to make a U-turn (still possible back then), and ‘exploded’ into the Gallery, whose name had been given to me and highly recommended by Fernando Zobel in Madrid—I frequented the Juana Mordo gallery there, which carried Fernando’s work, among others that I appreciated, in particular Eduardo Chillida—and we were at one point introduced by Juana and became friends. When Fernando heard that I was soon going to Manila, he provided me with brief introductory notes to several of his closest friends here, including Tessie and Arturo Luz.

“I rushed around the Luz like a madman, pointed out three or four paintings that caught my eye and, finding the prices reasonable, bought and paid for them on the spot before dashing off to my business meeting, leaving my address: the Inter-Con Hotel, where that very evening I received a phone call from Tessie Luz, inviting me to join them at a dinner they were hosting the next evening in a Chinese restaurant near my hotel. We soon became close friends and it is through the Luzes that I got to meet BenCab during his first homecoming Larawan show at the Luz Gallery in 1972.”

In the meantime Patrick had “discovered” BenCab’s works at the Luz Gallery and became a fan at first sight. He bought “Filipino Revolutionary Officers” as well as a number of other pieces from the gallery’s back room, including paintings, drawings and many prints. Framed, they hung all around the unusual “suspended roof” house in Urdaneta Village he rented from Filipino couturier Pitoy Moreno, while, for lack of wall space, others were kept in large map case cabinets in folders. Patrick is an art aficionado, a modest collector since in his teens spent in Mexico—“Whenever my allowance permitted and I came across something that caught my fancy.”

He either likes (or “loves”) a painting or sculpture, or is uninterested (or “hates” them)— as he puts it,  “That is that!” Patrick cites a comment on music by the American jazz pianist and composer Keith Jarrett, which he says perfectly sums up his own approach to art: “I cannot say what I think is right about music. I only know the rightness of it.”

Clearly then, Patrick recognized the “rightness” of Ben’s art. They became friends right away, and apart from art, they shared a passion for other things, including animals, insects, plants, flowers, and the natural world, as well as travel to exotic countries and cultures.

“After Ben settled back in England, I visited him in his homes there on at least a couple of occasions,” Patrick recalls.

Late in 1981, while Patrick attended an  Asian Managers business conference in Tokyo, the Urdaneta Village home he was renting burned down almost completely.

“Fortunately the village guards, thinking quickly, managed to push my precious souped-up 1975 all-black CJ-5 Jeep, ‘Godzilla,’ out of the garage, barely singed, and Arturo Luz who lived nearby rushed over to save—at the risk of his own life—a number of Thai celadon jars that I had collected. Otherwise I lost virtually all of my possessions, furniture, paintings, prints, ceramics, photo albums and negatives, cameras, lenses, clothes, etc., etc., not to mention one of my poor cats who had gotten trapped inside the house. A major disaster, not just for me, but also for Pitoy Moreno, the house owner, who phoned me in Tokyo to inform me of the situation.

“I decided to return posthaste to Manila, and while on the PAL flight waiting for takeoff in Tokyo, was handed a copy of the day’s broadsheet from Manila. On the front page I recognized the photo of a young woman who was interviewed about the fire—my maid!—and her account of the ‘many millions of pesos’ worth of artworks that had reportedly went up in smoke.”

Sadly that was also the end of the Baron’s collecting mania. Although he did subsequently acquire several BenCab drawings and prints, he had, as he says, “decided to change my ways and restrain my overwhelming compulsion to acquire every attractive object that I saw and could afford.”

“The awful fire did, however, have a very unexpected and emotional ‘silver lining’ of sorts. Shortly before Christmas 1981, I received an invitation to attend what was described as a ‘get together’ of artists and art collectors, which I assumed would be the usual Christmas party. Sure enough, after a sumptuous repast, I was brought to the Christmas tree, under which had been placed a large number of beautifully wrapped Christmas presents.

“To my shock and surprise I was informed that all of the gifts under the tree were for me… My friends, after learning of the fire, had gathered and each one agreed to donate an artwork so I could get started on a new collection of Filipino art. Even those who were abroad at the time (who included BenCab) had made arrangements to participate in the gift giving. I was, of course, utterly flabbergasted and sincerely touched by such an exceptional gesture of kindness and generosity, a true act of friendship and shared humanity.”