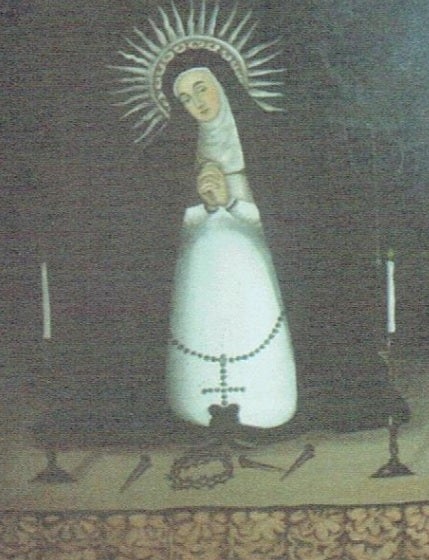 Canonically crowned on orders of Pope John Paul II in 1978 as the Queen of Cavite, the image of La Virgen de la Soledad de Porta Vaga, or Our Lady of Porta Vaga, marks its 350th year in the country, having been picked up on the shores of Cañacao Bay by natives in Cavite Viejo (now Cavite City) in 1667.

In his book “La Virgen de la Soledad de Porta Vaga: Reina de Cavite,” Fr. Virgilio Mendoza, Diocese of Imus historian, notes that the Soledad’s fiesta—celebrated every second and third Sundays of November—is beyond the usual celebration since it is “a way of life” and “a time for coming home” among Caviteños.

The earliest dating for the framed image, according to Church historian and University of Santo Tomas archivist Regalado Trota Jose, is 1692, as indicated by an inscription discovered at the back of the image following its recovery in the 1980s after it was stolen and stripped of its gold ornamentations.

The ermita was one of eight old churches of Cavite Puerto in which none survived except for the belfry of the Church of Santa Monica, now surrounded by informal settlers.

Other churches were damaged and destroyed by World War II and subsequent human interventions.

Mendoza’s research puts the date of the image’s arrival in 1667, as supported by the poem “Himno a la Virgen de Cavite” of the Jesuit priest Tomas de Andrade, who was assigned in Cavite Puerto in the late 17th century.

A number of miracles have been attributed to the image. The 1856 typhoon flooded the town except for the church and patio. The ship Lucero was saved from being grounded due to another typhoon Albay in 1857.

Past celebrations of the fiesta, which, during the Spanish era, was celebrated in four Sundays of November, were done with pomp and pageantry, with pilgrims coming from other towns and provinces.

Highlight of the feast this year was the procession with other images of Soldedad de Porta Vaga coming from Tambo in Buhi, Camarines Sur; Camba in San Nicolas, Manila; and San Isidro, Nueva Ecija.

The tradition in Cavite Puerto is interesting since people there still use the Cavite Chavacano language when praying the Rosary, cultural worker and author Billy Malacura says. –CONTRIBUTED