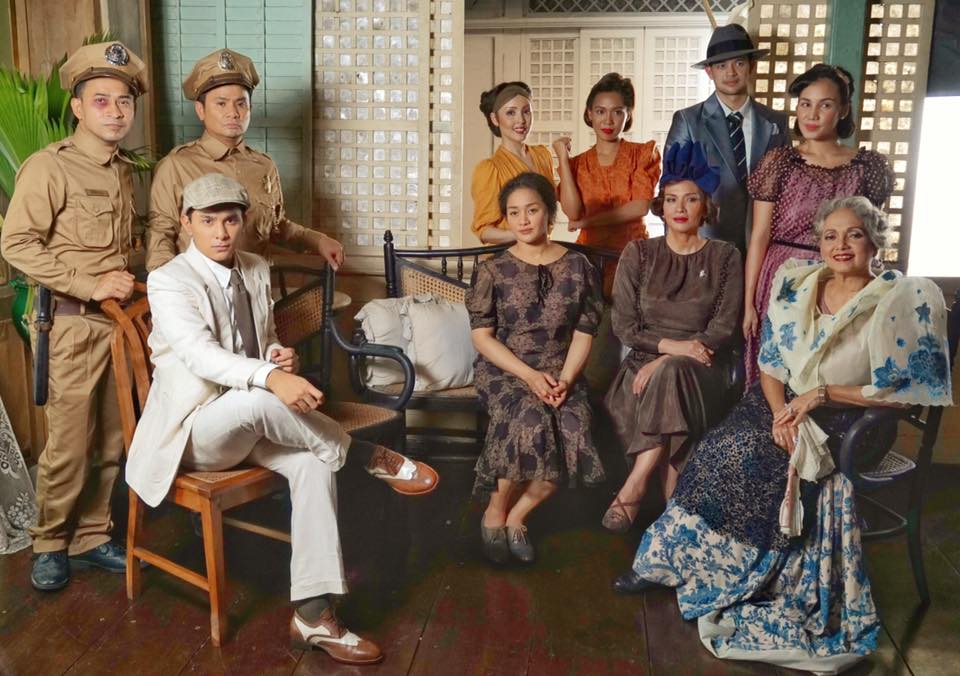 Cast of “Ang Larawan: The Musical.”

Nick Joaquin’s “A Portrait of the Artist as Filipino” is debuting as a movie at the 2017 Metro Manila Film Festival, titled “Ang Larawan: The Musical.”

Rolando Tinio, another National Artist like Nick Joaquin, translated the play to Filipino and wrote its libretto. It was first performed at the Cultural Center of the Philippines in 1997, directed by Tinio himself, with Ryan Cayabyab as composer.

It was produced by Musical Theater Philippines Inc. (Musicat), under the auspices of Celeste Legaspi and Girlie Rodis.

Now, two decades later, the musical could be seen by a wider audience through film, produced by Culturtain Musicat Productions, Inc.

It is the biggest and most ambitious project of the company, “armed only with a passionate belief in our material and creators,” Celeste says.

From stage to film

“Portrait” is a play in three acts written in 1950 as an elegy to our belle epoque and prewar Intramuros. The story revolves around two sisters, Candida and Paula, and their father Don Lorenzo Marasigan a high-profile painter.

The play premiered in 1955 at the Aurora Gardens in Intramuros, featuring the Barangay Theater Guild under the direction of Lamberto Avellana, with Daisy Avellana as Candida, a role she reprised in Avellana’s film adaptation in 1965.

That was long before the husband-and-wife team became National Artists. Naty Crame-Rogers portrayed Paula. It received six Famas nominations, including Best Picture. The classic film has been restored by the Film Development Council of the Philippines.

Countless performances of the play include those in Korea and the United States.

“In 1997, we first went courting Nick Joaquin to allow us to turn his play into a musical,” says Celeste, who portrayed Candida in the first “Larawan” musical.

Zsa Zsa Padilla essayed the role of Paula followed by Rachel Alejandro when it was remounted in 1998. The latter reprised her role in this year’s film adaptation.

“Nick and my father (National Artist Cesar Legaspi) were great pals,” Celeste says. “When my father was studying in Madrid in 1953, Nick would often visit him and Arturo Luz (another National Artist).”

Which means “Portrait” has seen the collaboration not only of four but five National Artists—Joaquin, the Avellanas, Tinio, and now, Legaspi (sort of).

She got to see Nick and followed him around before he agreed to her proposal.

“He only asked for San Miguel beer, a typewriter, and one condition: that only Rolando Tinio would translate it to Filipino,” she recalls.

The choice of Tinio was providential. Celeste had worked with him in Teatro Pilipino for years, and he had translated pop songs that she sang in previous concerts and recorded for an album.

Tinio immediately agreed. It took him only three weeks to come up with “Larawan.”

Cayabyab requested a reading of the translation to hear its flow in Filipino.

“Although the musical was clear and flowed well, we needed to have moments when the characters could sing what they felt. Rolando also saw the need for it, thus the duet of Candida and Paula. Ryan used that as theme of the house and of Candida’s final lament,” Celeste says.

Tinio worked hard as director. The day after recording the soundtrack, he passed away. That was 10 days before opening night. Upon suggestion by Tinio’s family, Dulaang UP director Tony Mabesa took over.

Making the film presented a lot of challenges.

“To edit a three-hour Tinio libretto to a two-hour film was an awesome task,” Celeste says.

First, finding the director who shared Tinio’s as well as the producer’s vision.

Loy Arcenas fit the bill. He has won the Special Jury Prize for his film “Niño” from the Cinemalaya indie film festival in 2011. He has directed plays for Ma-Yi Theater in New York, and for Tanghalang Pilipino and Peta.

In New York, he won an award for Best Theatrical Set Design.

A perfect cast had to meet demanding rehearsal schedules that took almost a year.

“That made a great difference when we finally started shooting in Intramuros and in Taal, Batangas,” Celeste says.

Playing the role of Candida is Joanna Ampil, who played Kim in a “Miss Saigon” production at London’s West End.

Rachel Alejandro, who played Paula to Celeste’s Candida 20 years ago, is finally in the right age.

Paulo Avelino, who will soon be seen as Gregorio del Pilar in a historical movie from the director and producers of “Heneral Luna,” auditioned for the role of Tony Javier and took several months of voice lessons.

The film was screened at the Tokyo International Film Festival to a predominantly Japanese audience.

“We went to Tokyo with our 1940s style baro’t saya,” Legaspi says. “The Japanese quietly sat and watched everything up to the very last credit, laughed with us on key scenes, then applauded! So many lined up for our autographs, sharing how the story of the sisters and their difficulties with their family resonated well with them. And the music enchanted them!”

The same enthusiasm was palpable at the San Francisco Cinematografo, where the audience was composed of Fil-Ams and other nationalities.

Variety magazine’s Richard Kuipers said in his review: “‘Larawan’ is beautifully decorated and topnotch in every technical detail… clearly made with utmost love and care… a class act.”

Recently a special private screening of the film was held by Far Eastern University for its partners and Philippine high school principals, as well as Joaquin’s heirs.

Tinio once wrote, “Present-day audiences may no longer mourn the passing of the world of truth and beauty symbolized by the old Intramuros and exemplified by Don Lorenzo Marasigan, Candida and Paula, but we certainly continue to admire and celebrate the tenacity of spirit with which they clung to their ideals of art and poetry that were losing ground as materialism and consumerism overtook their age.”

Joaquin had his final say, as he exhorted the audience: “It is significant for our people to look back and remember our culture and heritage as we look forward to the future. By supporting the musical, we would enable the producers and organizers to make this a reality.”

Tinio was right when he said: “Adapting ‘Portrait’ into a musical has turned the elegy into a celebration.” Legaspi adds, “A celebration of our past, our elegance, our art and music.”–CONTRIBUTED