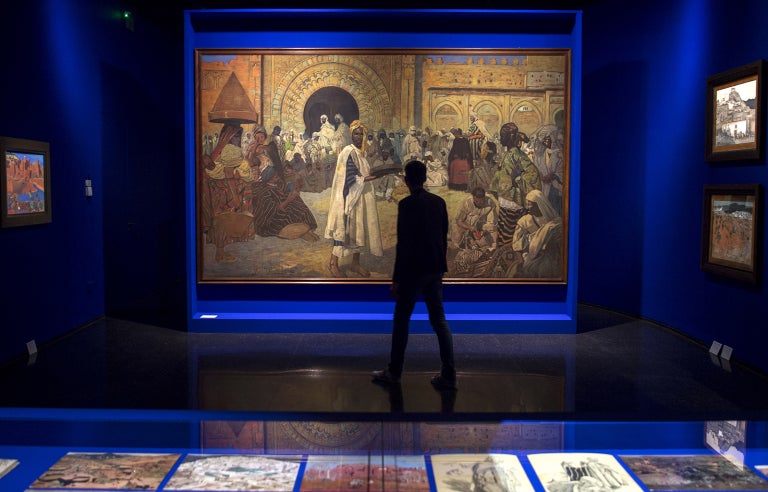 Inside the new Yves Saint Laurent museum in the Moroccan city of Marrakesh. Image: AFP/Fadel Senna

From Uzbekistan to Montenegro, and Mexico City to Edmonton, Alberta, Travel and Leisure’s list of the top 50 places to visit in 2018 is an eye-opening look at the destinations that are currently “at the forefront of the global conversation.”

After fellow travel brands like Lonely Planet, National Geographic Travel, Fodor’s and Afar, the diviners at Travel and Leisure are the latest to release their picks for the top trending and timely places to visit in 2018.

Like the lists before it, some are predictable — Pyeongchang, South Korea, for the Olympics — and dream destinations that never go out of style, like Fiji and Los Cabos, Mexico.

Here’s a look at a few of their more interesting picks:

Uzbekistan
The death of the country’s authoritarian president last year ushered in a new, brighter chapter for Uzbekistan, with a new regime that is intent on taking the nation forward, editors say. “For intrepid travelers, today’s Uzbekistan is a promised land: a Muslim-majority nation that’s both safe and affordable, with few tourists and an abundance of well-preserved mosques and harems.” The country is also more accessible thanks to the launch of a high-speed train that began connecting major cities last year. Likewise, links to the Persian Gulf and a network through Beijing and Europe are also in perspective.

Marrakesh, Morocco
There is a cultural revival afoot in this richly colorful city. Along with the opening of the YSL Museum in October, which pays homage to the fashion designer’s life and career in Morocco, the city will position itself as a hub for African art as the host of 1:54 Contemporary African Art Fair at the storied luxury La Mamounia hotel next February.

Edmonton, Alberta
Editors aptly describe Edmonton as Canada’s token middle child, flanked by its more popular and glitzier siblings Toronto, Vancouver and Montreal. But the opening of a buzzy new restaurant helmed by a Noma alumni that serves traditional indigenous foods, the Butternut Tree and the 419,000 square foot Royal Alberta Museum will nudge the city into the spotlight next year, editors predict.

Montenegro
Is Montenegro the new Croatia? That’s what Travel and Leisure seems to think. “Long overshadowed by its neighbor to the northwest, Montenegro is ready for the spotlight.” Proof of the country’s rising popularity? A flurry of new luxury properties set to open this year, including One&Only Portonovi, a resort that will overlook the Adriatic Sea and feature 140 villas, residences, tennis club and spa. Like its Balkan neighbors, Montenegro boasts its own beaches and medieval villages, minus the crowds.

Mexico City
As the 2018 World Design Capital, a first for the Americas, Mexico City is given pride of place in Travel and Leisure’s top 50 list. According to the World Design Organization, the city is a model for other megacities, with programs like bike sharing, urban gardens, parks and playgrounds, and regeneration designs aimed at transforming low-income areas around the city. JB