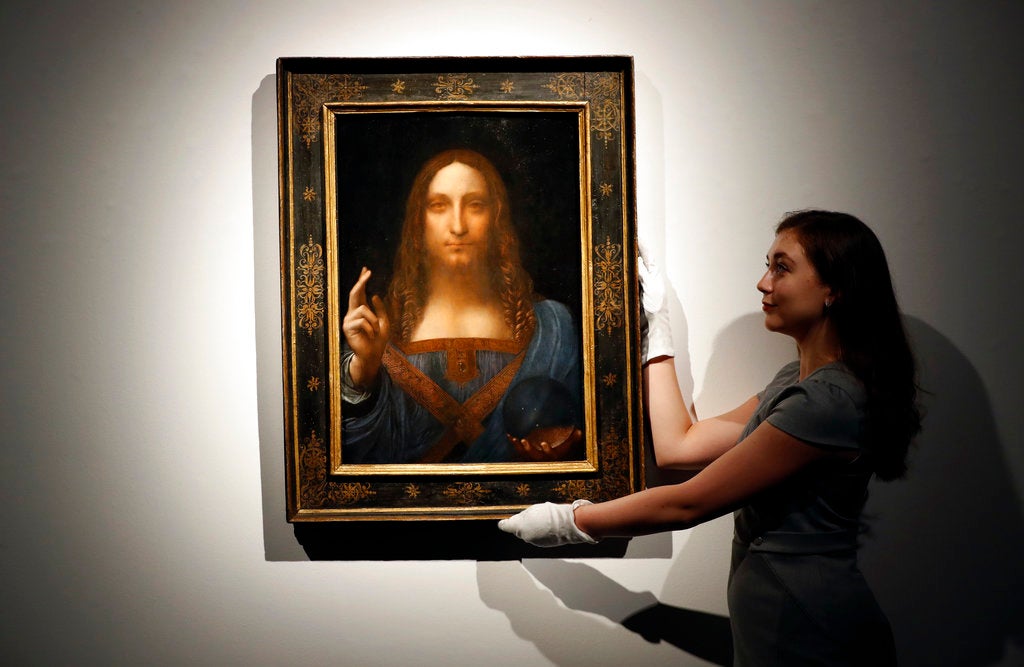 FILE- In this Oct. 24, 2017 file photo, an employee poses with Leonardo da Vinci's "Salvator Mundi" on display at Christie's auction rooms in London. The rare painting of Christ, which that sold for a record $450 million, is heading to a museum in Abu Dhabi. The newly-opened Louvre Abu Dhabi made the announcement in a tweet on Wednesday, Dec. 6. (AP Photo/Kirsty Wigglesworth, File)

NEW YORK (AP) — New York City collects sales tax on even the smallest items, but it probably won’t collect a cent in taxes on a nearly half-billion dollar painting by Leonardo da Vinci.

The Italian Renaissance artist’s “Salvator Mundi” sold for $450 million (380 million euros) during a record-breaking auction at Christie’s last month to a buyer reported to be a Saudi prince. But unless he decides to hang the work in a Manhattan pied-a-terre, or ships it using the wrong type of carrier, the city won’t get any taxes.

That’s because the state’s laws are structured so that out-of-town buyers generally don’t get hit with big tax bills. If they did, New York’s status as a global center for art sales might be jeopardized, an expert said.

Whoever the owner is, the painting appears headed at least temporarily to the newly opened branch of the Louvre museum in Abu Dhabi, the museum announced Wednesday.

The identity of the owner and ultimate destination of the artwork plays a big role in whether the sale is taxed.

If the painting of Christ raising a hand in blessing had been bought by someone who planned to keep it in New York, the buyer would be on the hook to pay an 8.875 percent city and local sales taxes, which on a $450 million purchase would amount to around $39 million (30 million euros) said Jason Kleinman, a lawyer who advises art collectors on the tax consequences of their purchases. That probably won’t happen if the painting is shipped to the Middle East.

“We’re not supposed to tax the Saudi guy if he takes the painting outside the U.S.,” Kleinman said. “The caveat is that New York has very particular rules about how a painting needs to be shipped out of the city. If those rules are not abided by, there will be some inadvertent sales tax.”

The painting’s buyer could be forced to pay the tax if he hired a specialized fine-art shipper to deliver the painting to him in Saudi Arabia or Abu Dhabi. New York state authorities say purchases by out-of-state buyers who use specialized art shippers as opposed to common freight carriers like UPS or FedEx are subject to sales tax.

Christie’s advises buyers on its website that it must collect tax on items collected by certain carriers. It also notes that buyers shipping artworks to 10 other U.S. states also would be on the hook for sales taxes.

New York has socked art houses in the past for failing to collect sales tax.

“We will continue to remain vigilant in order to ensure that art dealers and collectors fully abide by the state’s tax laws,” Schneiderman said at the time.

Schneiderman’s office had no comment on the sale of “Salvator Mundi,” Latin for “Savior of the World.” MKH