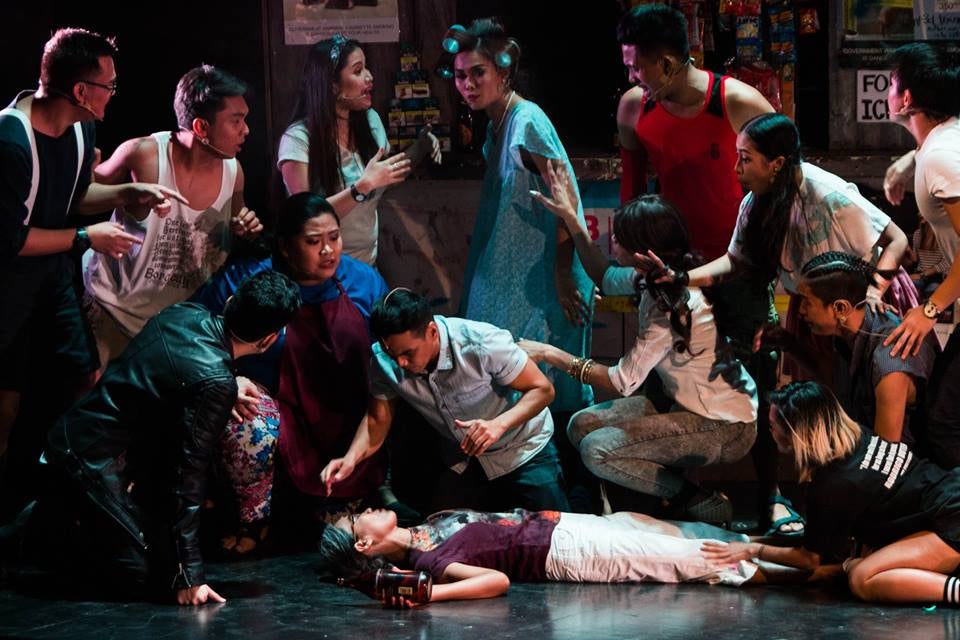 Scene from “Gugmang Giatay,” written by Jude Gitamondoc and Rowell Ucat, directed by Edison Saynes and brought to Manila from Cebu as part of the BGC Arts Festival —PHOTO FROM 2TINCANS PHILIPPINES

In the very last week of the month, we suddenly had a crowded schedule of plays in varied venues and of very varied styles—but all very Filipino in character. Here are short impressions of these notable offerings:

“Tao Po” was a remarkably creative exercise in bringing a human face to the tragedy of extrajudicial killings happening in the country—four monologues penned by Maynard Manansala, directed by Ed Lacson Jr., and, above all, acted out in a bravura one-woman performance by Mae Paner (aka Juana Change).

Paner segued from a Zumba instructor haunted by the ghosts of her husband and son, to a self-justifying police practitioner of “tokhang,” to a photojournalist obsessed with the nightly body count, to a poignant child scarred by the memory of her parents’ grisly deaths. The pieces ranged in tone from comic touches to elegiac sadness, and their relative impact will vary with each viewer. To this viewer, perhaps most memorable was the chilling portrayal of the vigilante cop as a common man sliding almost nonchalantly into his role, a process perhaps not limited to hitmen.

Indeed, beyond its virtues as theater, the play stands as a powerful social document of the times. All four pieces were based on real-life stories; two of the subjects, journalist Raffy Lerma and Zumba instructor Nanay Rosing, came on stage for the post-show talkback. Here was an instance of theater enhancing but not supplanting reality.

I had missed out on the original sold-out run at the CCP’s Tanghalang Batute; I was glad to finally catch it at the BGC Arts Center as part of an arts festival, but can imagine how much more directly impactful it would have been in the more intimate Batute.

Dulaang UP’s “Bagong Cristo” was a staging of Aurelio Tolentino’s early-20th-century play about workers’ rights, and was of special interest to one who had just seen Tanghalang Pilipino’s “Aurelio Sedisyoso,” a musical retelling of the firebrand playwright’s life and legacy.

I had associated Tolentino primarily with the cause of anti-US colonialism. “Bagong Cristo” was rather different, focusing on the conflict of social classes, explicitly socialist in its sympathies and searingly forthright in its portrayal of capitalist oppression. It’s polemical theater, so one does not look to the play for character development or nuanced storytelling, but for a clear exposition of a sociopolitical position—and in this it could not be more trenchant.

The Dulaang UP production, directed by Alexander Cortez, sought to clothe what might have been an overly severe polemic in dramatic period color and movement, and was successful to a large extent. (Honestly, though, I thought the presumably symbolic use of Roman centurion motifs for the protagonist’s tormentors was an unnecessary deviation from the otherwise realist period design of the rest of the production.)

The cast was in fine form, and Boo Gabunada in the lead was a charismatic presence, especially in his final oration, though necessarily the performances were primarily declamatory.

It was a play for its time, and a fascinating view into the theatrical idiom of the period. To this viewer’s mind, though, unused to the idiom, it would have been interesting if its theme and story could be transposed to a more “modern” social-realist mode.

Back at the BGC Arts Center, the Cebuano “Bisrock” jukebox musical “Gugmang Giatay” (“Damned Love”) could not have been more different from the two preceding plays: a rollickingly entertaining folksy interplay of people next door, woven around Cebuano songs both pop (Max Surban was the only name familiar to me) and classic (“Usahay”, “Matud Nila”), irreverently delivered.

The longish musical was completely in Cebuano. A running translation in English was flashed above the stage but, really, in the end, it was more fun just sitting back and enjoying the dynamic sound of the vernacular ricocheting among the characters.

Apparently written and directed by native Cebuanos, the cast as well (with the exception of Manila-based though Cebuano-speaking actor Bong Cabrera) all hailed from Cebu. And to go by their performances, Manila audiences are missing a lot.

The standouts were leads Lourdes May Maglinte and Von Saw as the young lovers, and the wonderfully comic elderly store owner played by Shiella Pestaño-Gemperoa. But the whole cast sang superbly and were a terrific ensemble.

Nor was it all just mindless fluff. In the midst of the fun, the play managed to make telling points about the ultimate enchantment of all varieties of love. It was a signal revelation of the largely unnoticed (by Manila “sophisticates” anyway) wealth of regional culture. —CONTRIBUTED