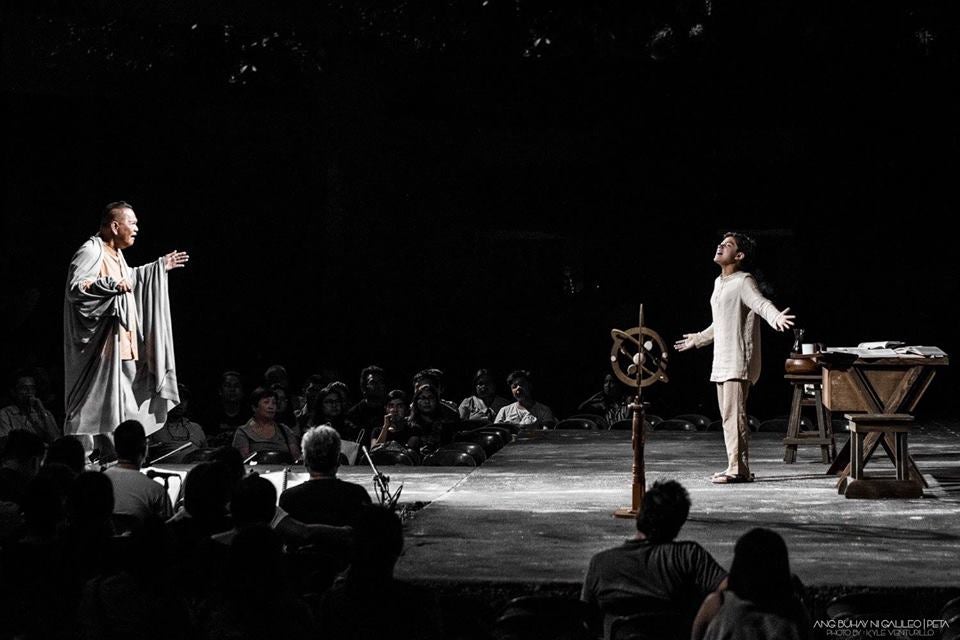 Given the current state of affairs, it’s not surprising that many theater companies are staging plays with anti-establishment themes and stories.

Tanghalang Pilipino’s “Ang Pag-uusig,” a Filipino translation of Arthur Miller’s “The Crucible,” addressed the matter head-on with its scathing and too-close-for-comfort rendition of the Salem witch trials. Repertory Philippines’ “Hair” relived the flower power movement of the late ’60s. Even Atlantis Theatrical’s “Matilda The Musical” had its titular character leading a bunch of fellow kids in ousting a despotic schoolmistress.

Peta, a theater company that was at the forefront of the struggle against martial law, restaged last week one of its classic productions, in a special three-night performance at its old home, the open-air Rajah Sulayman Theater in Intramuros.

“Ang Buhay ni Galileo,” a Filipino translation of Bertolt Brecht’s “Galileo Galilei,” was first staged more than 30 years ago under German National Theater director Fritz Bennewitz. This time, “Galileo” was under the very capable hands of director Rody Vera, a disciple of Bennewitz. And Joel Lamangan was back in the role of a lifetime as the revolutionary scientist Galileo.

Brecht applied a canny dichotomy to “Galileo”: Having the mother of all revolutions—the world-altering discovery that the earth revolves around the sun, and not vice versa as had been held as sacred truth throughout the centuries—launched by a visionary who had zero interest in sustaining it.

Galileo’s astronomical discoveries in the 13th century literally shook the foundations of the civilized world. Against the canonical teachings of the then all-powerful Roman Catholic Church and the science of the times, Galileo dared to say, and prove publicly, that the sun didn’t revolve around the earth, but the other way around. In other words, planet Earth—humanity—was not the center of the universe.

This was supreme heresy back then, a monumental challenge to a universal belief system that undergirded the political, economic and religious structures of the Middle Ages. The Inquisition recognized the threat it posed: Expose one element of the entire geopolitical system as fragile, and everything (including the Church’s own power structure) may come crashing down.

But, interestingly, Brecht’s Galileo turned out to be far from the heroic stereotype. Lamangan played him as an ornery genius who, while stubbornly sticking to his discoveries, was also a practical, all-too-human creature who relished his comforts and shirked at any sign of pain. This Galileo was not above either bargaining for more money or taking credit for someone else’s work. His revolution and all its world-changing repercussions would eventually sprint ahead of him—and, as the ending implied, would continue without its reluctant instigator.

Without skimping on the drama, the original material, made more poignant and powerful by Alan Glinoga’s translation, was one glorious intellectual discourse on the essence of revolution: Is change truly necessary? Should one sacrifice peace for progress? Is there logic in maintaining personal integrity and the beliefs one holds to be true, at the cost of liberty, reputation and happiness?

As Galileo, Lamangan’s sharp caustic wit, softened by a subtle vulnerability, could take the audience to the heights of intellectual sublimity one moment, then drop them down to gruff, street-market realities the next. Surrounding him was a sprawling, well-knit ensemble comprising several generations of Peta actors.

Among the most notable was an empathetic Bodjie Pascua, as the Pope vacillating between saving and controlling Galileo; and the play’s everyman, Andrea (Ian Segarra), Galileo’s idealistic student who has the hardest time forgiving his mentor’s cowardice.

Staging this play at the Rajah Sulayman Theater proved to be more than just a nod to the past. The roofless venue invited the listening and watching audience to gaze at the expanse above them, the night sky and the litter of stars prodding the imagination to attempt to see what Galileo had seen—and, in turn, grasp the magnificence of this play’s restless, questing vision. —CONTRIBUTED