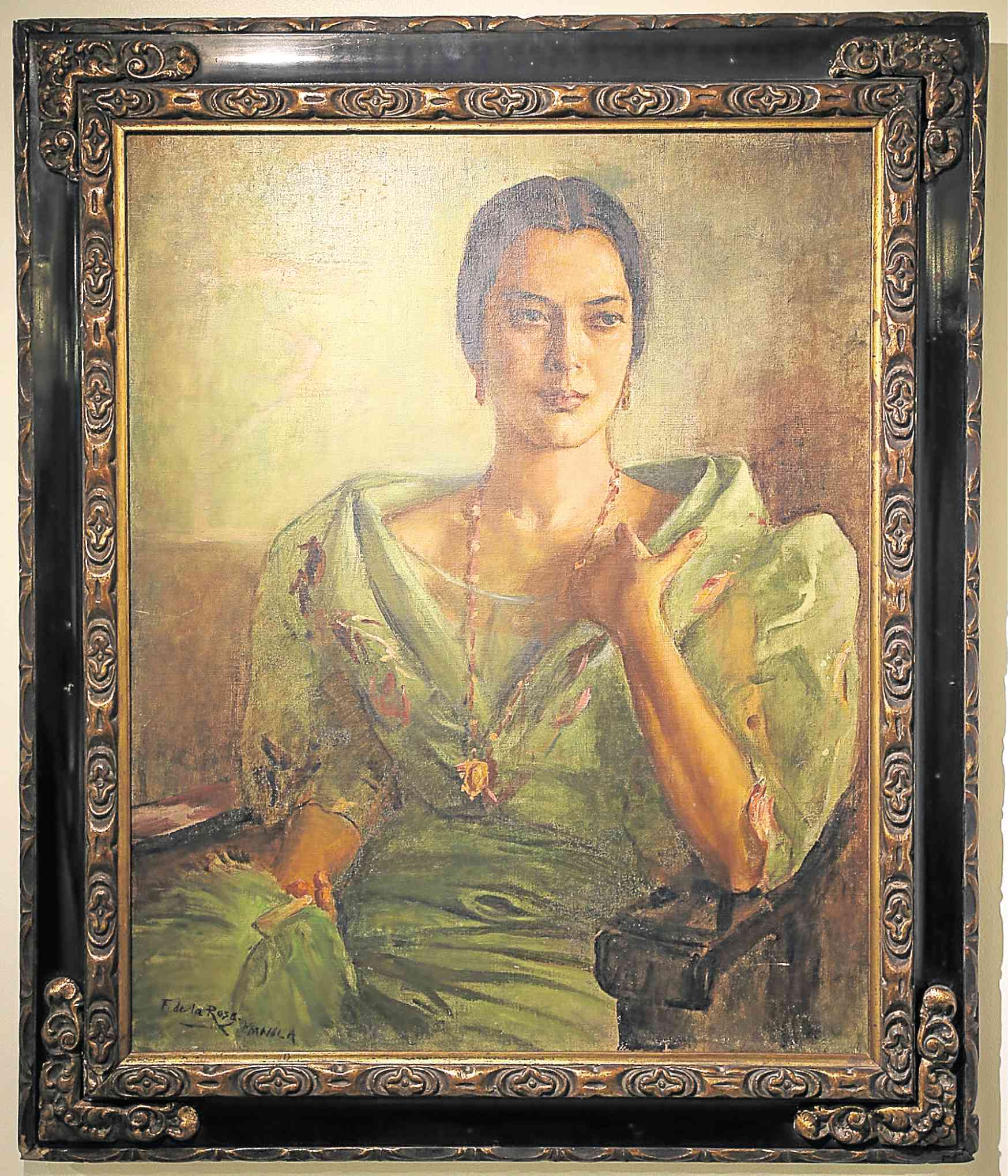 Something crucial to the understanding of the subject not seen by most guests at the launch of “The Life and Times of Purita Kalaw-Ledesma” was, quite literally, just above their heads.

On the 8th level of the 32-floor building, where the Purita Kalaw-Ledesma Center is based, a special exhibit has been mounted “to ground the essays in the book within the framework of Kalaw-Ledesma’s collection, particularly works associated with recollections lifted from her published works and of those who knew her personally.”

Curated by Ricky Francisco, “Piecing Together: Selections and Stories from the Purita Kalaw-Ledesma Collection” is divided into five sections corresponding to the life and times of the reputed Mother of Philippine Modern Art.

Among artifacts and documents in glass vitrines are artworks arrayed on a long white wall. Centerpiece is Benedicto Cabrera’s “Refugees,” 1992, acrylic on handmade paper.

Muse of the famous

A good friend of her father, De la Rosa painted her portrait when she was 18.

Also on display is a 1954 Fernando Zóbel pen-on-paper sketch of her with a fan, recently discovered pasted in one of her scrapbooks.

Kalaw-Ledesma Foundation president and her third daughter Ada Mabilangan says the foundation, launched last year to help in the development of Philippine arts and culture, focuses on her archives.

“The center is well-known for her art collection, books, but not her scrapbooks,” says Mabilangan. “We have 83 volumes of them, they have been digitized, but not many know about them.”

These have been accumulated for 52 years starting in 1948, when Kalaw-Ledesma founded the Art Association of the Philippines (AAP), until 2000, the year she had a stroke at 86.

“It occurred in the office,” recalls Mabilangan of her mother’s debilitating stroke. “She used to go to the office daily.”

She was descended from eminence.

Father Teodoro M. Kalaw was director of the National Library, a prominent scholar, legislator and historian from Lipa, Batangas.

Mother Pura Villanueva was the first Queen of the Manila Carnival (equivalent to today’s Binibining Pilipinas), an early suffragist and feminist writer from Arevalo, Iloilo.

She married Rafael Alberto Ledesma of Silay, Negros Occidental. They had four daughters.

“Family to her came first,” says Mabilangan. “She was super-mabait, soft-hearted masyado. Spoiled kami. Lahat bigay. She was someone na di nagtatanim ng sama ng loob. Even if there were back-stabbers, kinakalimutan n’ya. She was of the generation of Helena Benitez. They were a generation of women na masisipag. They went through the war.”

Before the war, she studied for three years at Escuela de Bellas Artes (now University of the Philippines College of Fine Arts), when genre master Fabián de la Rosa was dean.

She recalls in her autobiography: “Since an art market was unheard of in those days, an artist could end up as a tombstone carver, a sign painter, or a staffer in the art department of a newspaper or advertising agency. Artists were looked down upon by society in general as ‘hampaslupa.’ The notion then was that only those who could not pass their academic subjects became painters, sculptors or musicians.”

On display are specimens of what she had created in art school. Here are two small sculptural pieces, roughly hewn and looking unfinished à la Rodin: a slate-blue glazed ceramic of four faces with flowers on the head; and a terra-cotta piece depicting Mother Mary.

There’s a nude of a seated woman, and another of two female figures, in charcoal on brown paper, resembling pencil studies of Magsaysay-Ho.

Here also is her graduate thesis at UP—what came to be known as the seminal 1955 essay “A Critical Analysis of Modern Painting in the Philippines Today,” which became a battle cry for the onward movement of modernism in Philippine art.

Many future leading artists had been her classmates, associates or scholars. Among her classmates at UP were future National Artists Francisco, Legaspi and Manansala. Magsaysay-Ho had been a classmate since high school. Zóbel was an AAP student.

She helped Abueva get a scholarship at UP, and Manansala a grant to study in Paris. Through her efforts, AAP acquired a 19th-century lithograph printer, thus enabling Rodriguez to refine printmaking as art.

She could have been one of them, had she pursued art-making. She even took further studies in art and design at University of Michigan, and completed her master’s degree in art education when she was already 72.

“She had the gifts [to become herself an artist],” says Mabilangan, “but she sublimated them through helping other artists. She had no regrets. Maybe she had, but she never told us.”

By championing those artists and founding the AAP, Kalaw-Ledesma was crucial in elevating not only Philippine art but also the status of Filipino artists.

She was a woman of diverse interests. While charting the course of Philippine modern art, she was also managing the family real-estate company.

Aside from writing the art books “The Struggle for Philippine Art” (1974) and “Edades: National Artist” (1979), both with Amadís Ma. Guerrero, and “The Biggest Little Room: The Story of the Philippine Art Gallery” (1987), she also wrote the autobiography “And Life Goes on” (1994).

Following her mother, who published in 1918 one of the earliest Filipino cookbooks, “Condimentos Indigenas,” she also published in the ’80s a cookbook of her own, “Family Recipes.”

The range of her interests can be gleaned from her collection of Filipiniana, rare books, general-interest and reference books, in display cabinets on a corner of the exhibition hall—from Louise Nevelson’s “Dawns and Dusks” to André Malraux’s “The Voices of Science” to Judith Krantz’s “Mistral’s Daughter.”

And this to encapsulate a life fully lived: “What saved me from being consumed by materialism was my love for the arts, the self-fulfillment I derived from intangible but beautiful things, from reading poetry, from relishing the movement of dance. To me, this remains far more important and gratifying than all the wealth in the world.”

The exhibit runs through December. Viewing is by appointment only: Monday-Friday, 9 a.m.-4 p.m. Call 8341828; or visit klfi.ph or klfi [email protected]