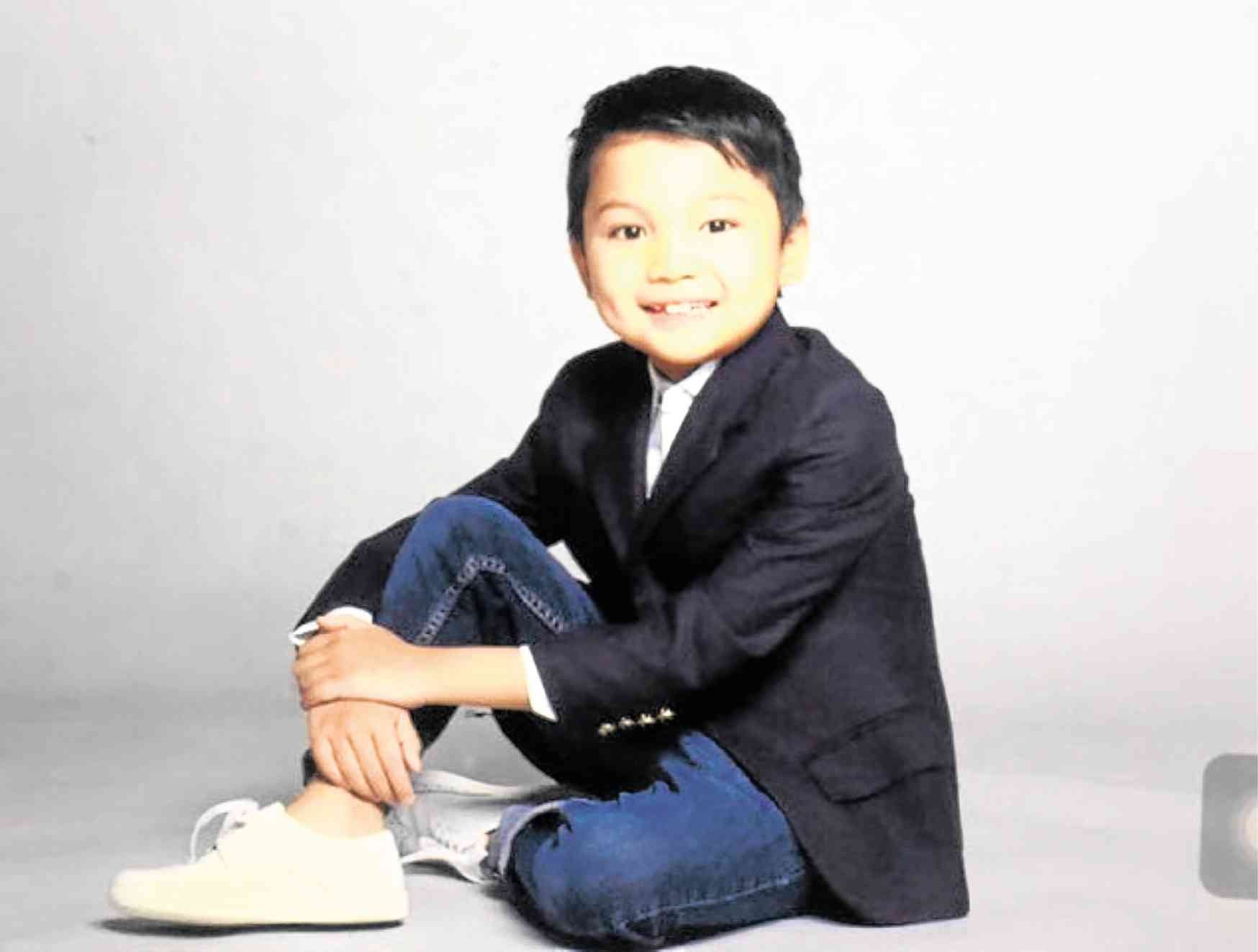 As a toddler, Jaime Manahan Yupangco would dance to the rhythm of the spoon hitting his dad Rick’s coffee cup.

At four years old, he wowed his classmates by doing a Billy Elliot-Bruno Mars mash-up in a school play.

When he sprained his ankle while on vacation in London earlier this year, Jaime thought of rehearsing for the part of Tiny Tim in “A Christmas Carol” because the character uses a crutch.

Jaime, who turned eight last week, said he knows how to “make lemonade.” His portrayal of the Charles Dickens character in the Globe Live and 9Works Theatricals production has drawn positive reviews and curiosity from theater buffs.

“Jaime has been singing, dancing and performing for us as far back as I can remember,” proud mother Juana Yupangco told Lifestyle in an e-mail interview.

When Jaime was a preschooler, Juana already noticed “an inner rhythm and song” in her son’s walk. He put on shows for the family, sang a wide range of songs, and knew all the words to “The Jersey Boys” soundtrack that was on permanent play in the car stereo.

“We even took him to see the movie version (despite the cusswords in the dialogue) because he wanted to see it so badly,” Juana said.

Of course, pundits would be quick to point out how relatively easy it should have been for Jaime to enter show business.

His granddad, Johnny Manahan (whom Jaime fondly calls “Wowo”), is a TV director and the head of ABS-CBN’s Star Magic Circle where he’s known as “Mr. M.”

Tats trained under Rolando Tinio and Laurice Guillen in the Ateneo-Maryknoll drama group and was a stalwart of the CCP End Room Theater that later morphed into Tanghalang Pilipino.

It took a long while before Mr. M gave his nod and allowed Jaime to join the latest Star Magic Circle batch, a day before the child’s theater debut earlier this month.

Jaime had been telling Wowo he wanted to be on TV since he was four or five, Juana recalled.

Despite his clout in one of the country’s biggest networks, Johnny would rather be a supportive lolo than usher his grandson into show biz.

“My dad was very cool and was just amused watching Jaime sing and dance for him. I think even he was a little surprised to see Jaime’s passion,” Juana said.

Then the Billy Elliot-Bruno Mars gig came up. Juana called up Johnny, who then asked “The Voice Kids” top coach Lindie Achacoso to help.

This was followed by another school production where the teacher had a hard time calling Jaime back from the stage because the kid wouldn’t stop dancing.

Now, Tats, who’s still involved in the arts and ballet, brings Jaime and sister Rosanna to plays, shows and rehearsals “to expose the kids to the arts,” Juana said.

At one point, Jaime’s abilities drew inquiries from talent agents. “They are asking me if he has a manager! I felt really overwhelmed. Plus, Jaime told me this is something he wants to pursue. So, of course I was already thinking of the next step—finding more roles for him, maybe through an agent,” Juana said.

“As the months progressed, my dad started seeing Jaime’s potential and eventually started giving him notes and telling him what to do. One day, (Johnny) said, ‘Wow, he really can do this!’” she added.

One time, Tats brought Jaime to a rehearsal for “Newsies,” a 9Works production, where the child met Patrick “PJ” Rebullida. Juana said Jaime raved about the dancers and “Tito PJ.” He was apparently moved after watching the actual show.

PJ later suggested that Tats bring Jaime to audition in “A Christmas Carol.”

Jaime never forgot the offer and even saw his accident in London as a springboard to grab the part. When they returned to Manila, Juana supervised Jaime’s vocal practice after PJ asked Tats for a video of Jaime singing.

Juana later turned to her dad Johnny, who sent voice coach Sweet Tiongson. A week after his tryout, a producer called to say Jaime was in. Juana remembered crying and screaming on the phone.

Following the enthusiastic reviews of Jaime’s theater debut, Juana said that what her son only cares about is that his friends have fun watching him perform. There are definitely no career projections at this point.

Juana said she is aware that some would more likely point out Jaime’s bloodline than recognize his natural talent.

“This is something that is very tricky to navigate because joining show business, it’s inevitable that people will think and say certain things… More than ever, we are concentrating on developing his skills so that no one can say he doesn’t deserve to be there,” Juana said.

“Protective and involved” is how Juana described her mind-set at the moment.

Jaime is “ecstatic” to be part of Star Magic Circle 2017. Juana said she feels “a little strange” to experience show business from another vantage point.

“My parents are production people,” Juana pointed out. “I was also in production when I did theater in London for awhile. So we always saw things from a different point of view… I think this makes it more difficult because we are used to the backend. We know how producers and directors think.”

“We are happy that Jaime has found something he loves early on and we are grateful that he has many opportunities to do what he loves… They don’t call it the acting bug for nothing,” Juana said.