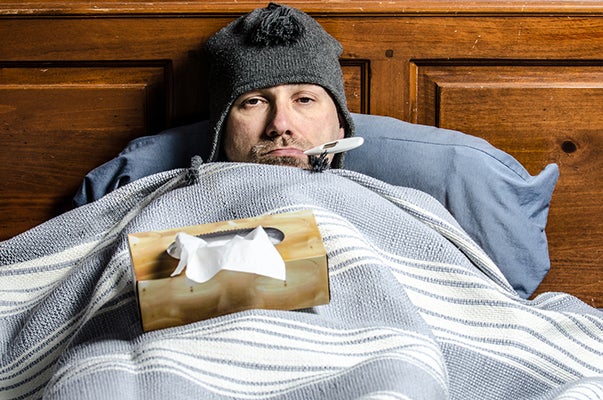 Contrary to popular belief, and the opinions of many women, men really do suffer from “man flu” — at least according to a Canadian researcher and his most recent study.

Published online in the Christmas issue of The BMJ, Dr. Kyle Sue, a clinical assistant professor at Memorial University of Newfoundland in Canada, details how he looked into previous studies to investigate the claim of man flu, meaning a cold or similar minor condition experienced by a man who is thought to be exaggerating the severity of the symptoms.

Although there is a high incidence and prevalence of viral respiratory illnesses around the world, until now no scientific review has actually examined whether the term “man flu” is accurate.

Together the research included thousands of participants, with Dr. Sue finding some evidence to suggest that rather than exaggerating their symptoms, men do indeed suffer more from viral respiratory illness than women.

The studies showed that adult men have a higher risk of hospital admission and have higher rates of influenza-associated deaths compared with women in the same age groups, regardless of any other underlying disease.

In addition, males are more susceptible to complications and a higher risk of death with many acute respiratory diseases.

Dr. Sue also found some evidence to suggest that men are more at risk because they have a less robust immune system, which he says could have an evolutionary benefit “as it has allowed men to invest their energy in other biological processes, such as growth, secondary sex characteristics, and reproduction.”

“Lying on the couch, not getting out of bed, or receiving assistance with activities of daily living could also be evolutionarily behaviors that protect against predators,” he adds. “Perhaps now is the time for male-friendly spaces, equipped with enormous televisions and reclining chairs, to be set up where men can recover from the debilitating effects of man flu in safety and comfort.”

Whether women will agree is yet to be seen, with Dr. Sue also adding that despite his findings, further higher quality research into man flu is needed, “because it remains uncertain whether viral quantities, immune response, symptoms, and recovery time can be affected by environmental conditions.” JB